Yesterday late in the afternoon I decided to catch some air with my MXL. As I was pre-flighting and doing my walkaround I heard the sound of V-8 engines roaring within 5 miles. Typically when you hear that unique sound out in the country it is a guy with a Muscle Car blowing out the cobwebs for an eighth or quarter of a mile and then backing off. These V-8s were pumping out horsepower for minutes at a time. Although my primary concentration was on my airplane, in the back of my mind these two contradictory factoids did not jive. When I got done with the preflight I was putting my earplugs in before “helmeting up” and I reasoned that these must be some boats on the Arkansas River which is east of Selby field about 1.5 miles. The moment I made that connection I was puzzled by that as I had never seen high powered boats on that section of the Arkansas. It is fairly shallow most of the time and there are lots of branches in it. I figured they must be some type of jet boat but looked forward to an eye witness opportunity. So I took off to take a look. The wind was about 25 mph from the SSE so my ground speed was as low as 15 mph as measured on my GPS. I crept along and eased over to the first big bend in the river between Derby and Mulvane, Kansas. Then I saw one: 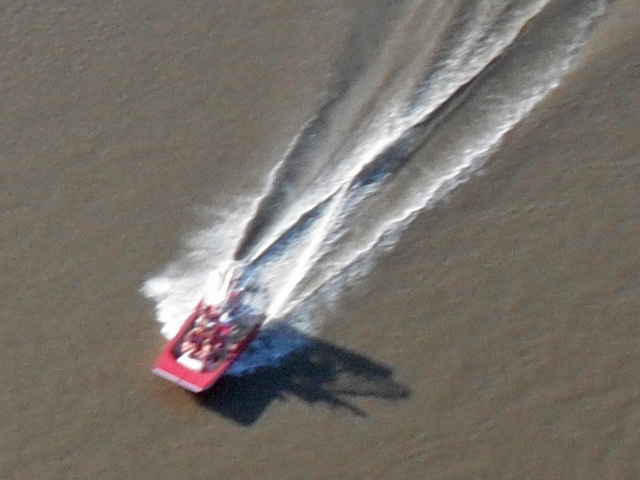 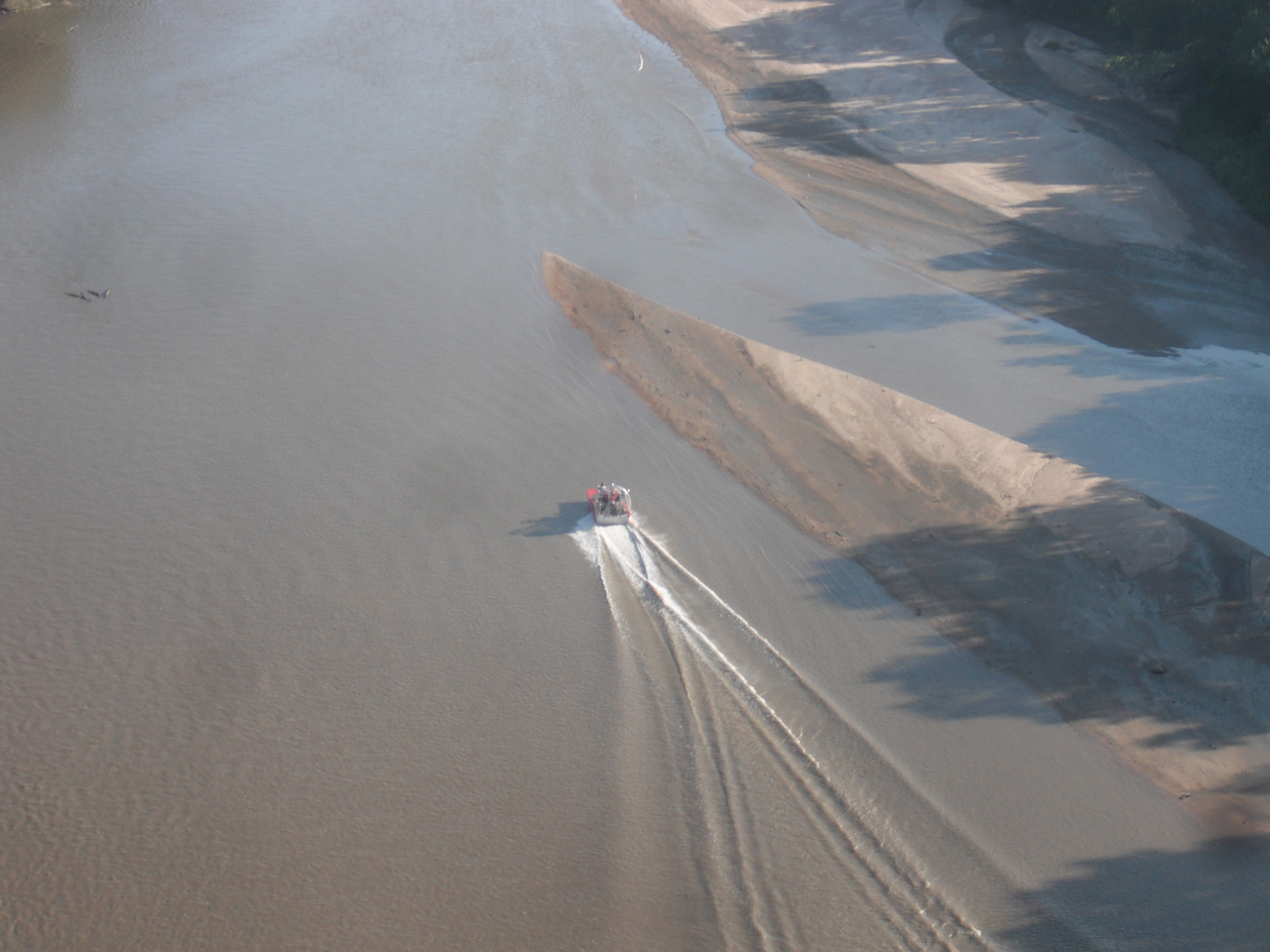 It was a Swamp Boat or Air Boat and their were three of them on the river. Because the wind was so high I did not want to get lower so I had to shoot these pictures from about 400′. The one above is a cropped part of the frame in order to bring it a little closer to you. Even shooting from 400′ with a wide angle because of the turbulent air I could not get a still moment to snap these shots so while I am not proud of the photography I think the subject matter outweighs the fuzzy shots. 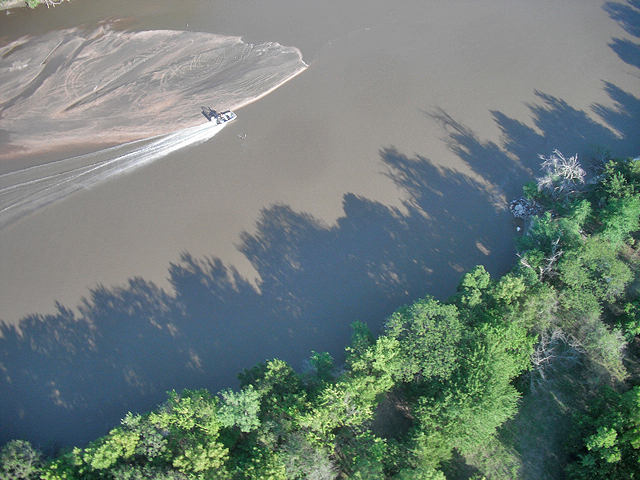 This is the first boat I saw and it just had one guy in it. Before I took this shot, because he was on an “open” bend of the river (not enclosed by trees), I swung down to about 15′ over the river and waved at him. He had noticed me and when I dropped down about 50 yards to his right he enthusiastically waved. It was pretty turbulent even without the additional mechanical inducement provided by the 40’+ trees so I did not stay down there long. 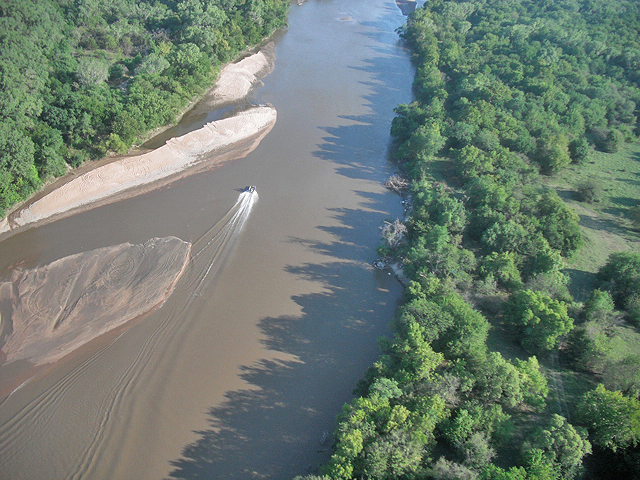 I swung around to the north a bit at the same time the “Lone Ranger” gunned it to the south. It looked neat enough I decided to follow him for a bit. Ahead of him I saw something in the river I couldn’t make out at the moment. So I powered up a little to get closer… 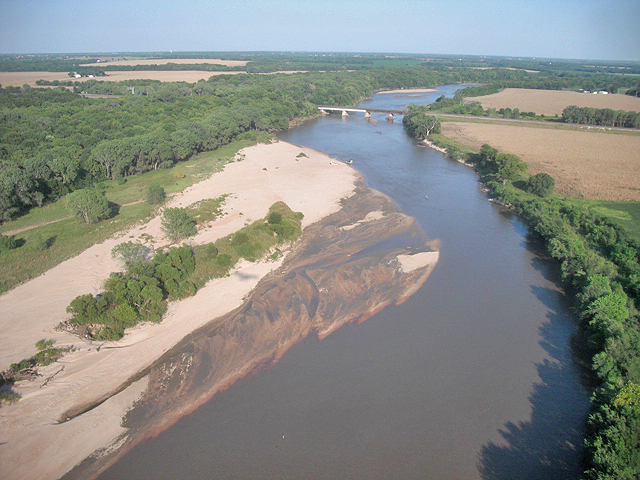 One boat slides on the sand while the folks in the other boat watch. The Mulvane RR Bridge is to their SE.

It was the other two boats in the flotilla. They had pulled to a stop next to a sandbar and then one of the boats motored right up on to the sand and was blasting around. What had caught my attention was the mini sand storm that had developed from this stunt. 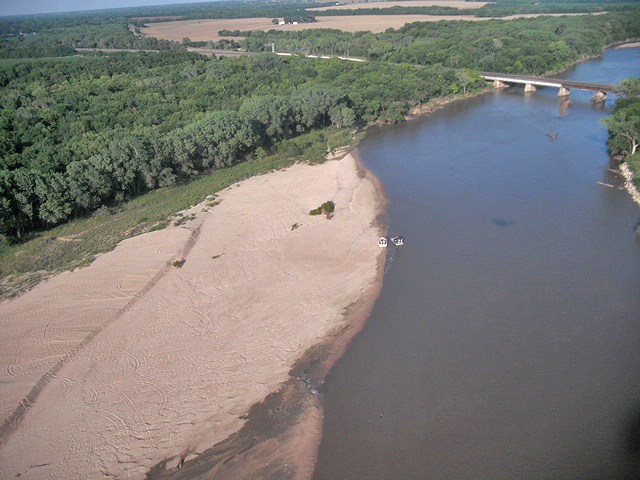 Here you see a slightly closer view. The boat on the right had completely encircled the one that is partially on the beach and was now idling next to it in the shallow water.

Here are a few more pictures of the boats. They form a sequence: 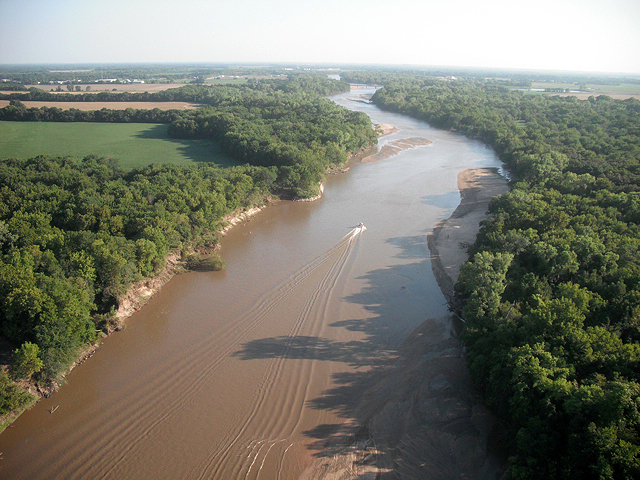 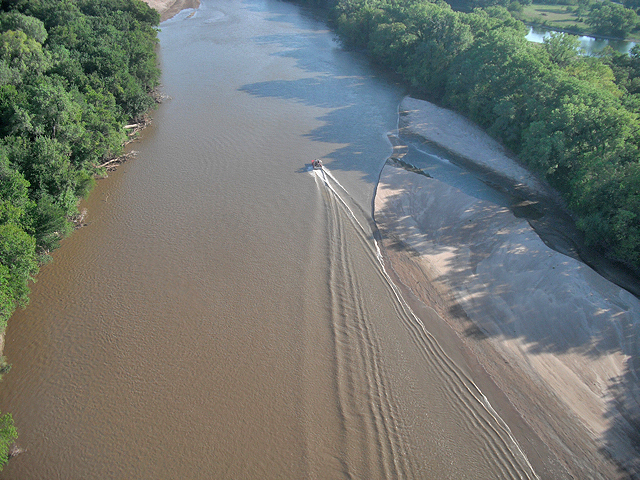 Gaining on the swamp boat 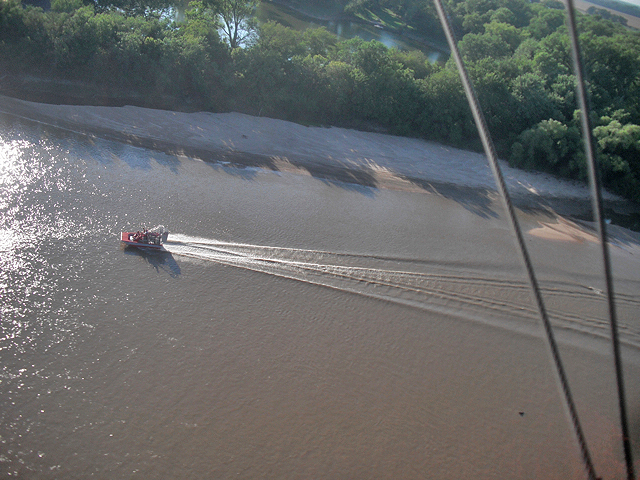 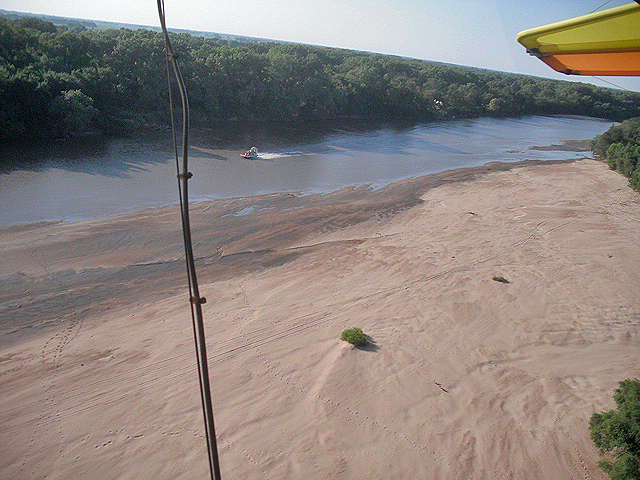 Looking back at the swamp boat completing the sequence

I decided I had flown with these guys enough and decided to encircle Mulvane, Kansas and then head back to the base. On the way to do this I saw one of those idyllic farms so prevalent in this area that I had to circle around to get my camera back out of my pocket so I could take this picture: 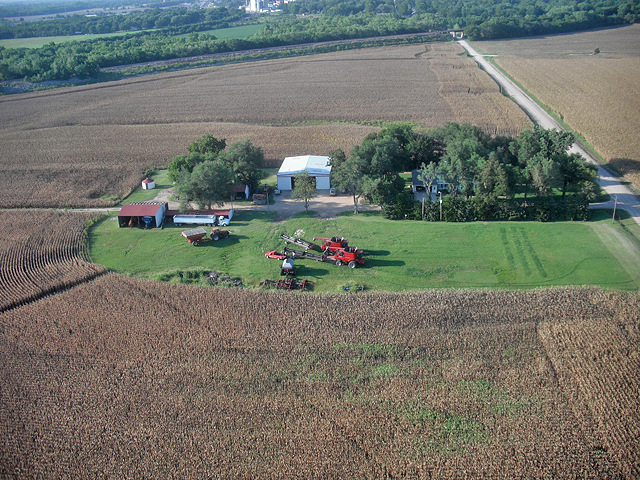 A picturesque farmstead on the fertile ground next to the river just south of Mulvane, Kansas

This picture speaks volumes to me about the American Farm. I’ll leave it at that.

Just a little south of Selby Field I saw an interesting phenomenon that I will picture below. Out of the corner of my eye I noticed what at first looked like a huge cloud of gnats. But it would appear and disappear. I grabbed my camera and circled above at about 200′ so I could document the scene. 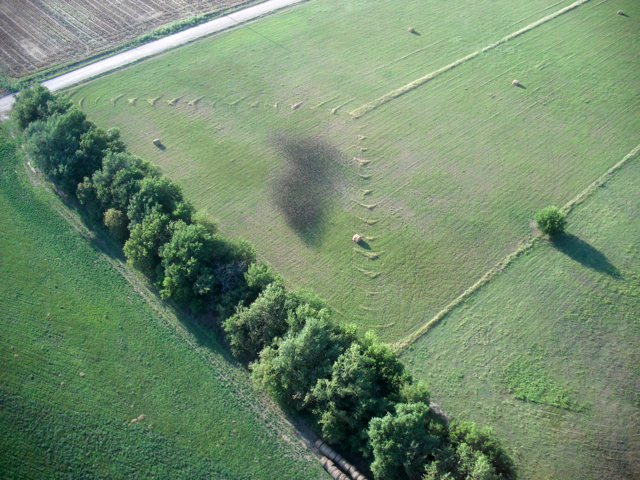 This shot oriented with the top of the screen to the northwest. You can see the birds in “swarm” mode. 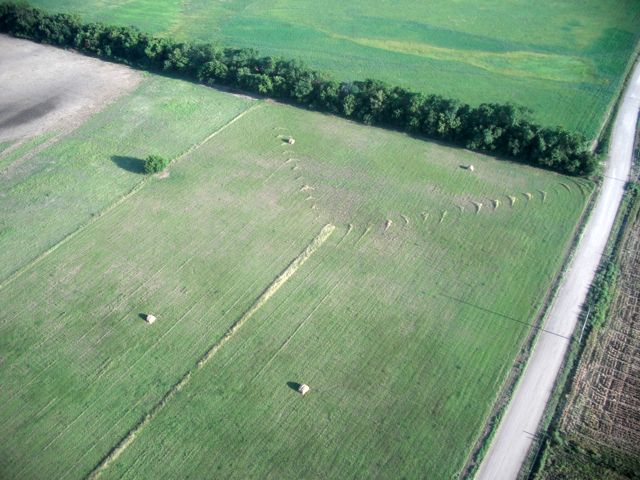 This is the same field shot moments later as I circled overhead. The birds are still in roughly the same place but they seem to have disappeared. I could barely see them down there but the coloration they displayed from this angle camouflaged them entirely. I’m thinking that because the wind was strong and from the SSE, when I shot them from that direction I was seeing the color of their outstretched wings and backs. When shot from the other direction I was seeing their tails and more “edge-on” to their wings where apparently there was not enough color to show against the green. It was very interesting. I’m not sure but they might be Starlings.

Years ago when I shot my first movie there were millions of these birds that would move through the area in long “tubular” structures that look more like the swarm of bees than other birds flocking behavior. I used a static shot of a huge flock of them flying through the scene as a backdrop to some graphics. After that year or so they just faded away. I’m thinking this is another flock of them. They are either starlings or blackbirds.