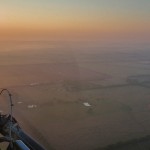 I havent had the time to fly my max much lately so friday evening when Brian asked if I wanted to join him on a flight out to Beaumont the following morning I quickly agreed. Beaumont is a small Kansas railroad town nestled in the flint hills 43 miles east-north-east of our home base. Flying to Beaumont for breakfast is slightly different than flying to most fly-in breakfast destinations. After arriving at Beaumont you land on the grass strip east of town, taxi down the road into town, and park across the street From the Beaumont Hotel. This is the third time I have atempted the Beaumont flight, I have made it all the way twice but had to turn back with mechanical difficulties last month.

At 7:00 sharp on saturday morning Brian and his quicksilver lifted off for Beaumont, having a slightly faster aircraft I put 6 minutes of spacing between Brian’s takeoff and mine, this ensured that both of us arrived in Beaumont at the same time. As I leveled off 1000ft above the ground I was greeted with one of the most awe inspiring sights I have seen to date. A land of uncomprehensable beauty lay below me like something from a dream. The low lying fog softened the normally harsh kansas sunrise and in doing so was transformed to beautifully soft shades of pink and orange, these colors were reflected off the cooling shroud on the engine and in the various small ponds dotting the countryside. All of this lasted maybe 30 seconds then the colors gave way to the typically bright kansas sun. It is times like this that I know there is a God and he has given me the privilage of witnessing something truely amazing.

This picture doesn't do the scene justice but it gives you a taste of what it was like.

As I blasted east, riding the west wind towards beaumont I spent most of the next 20 minutes wondering if I was going to go blind and wishing I hadn’t left my sunglasses at home! As I entered the pattern midfield for the grass runway I observed Brian taxiing towards the hotel and I congradulated myself for a perfectly timed departure. Beaumont’s runway is nearly half a mile long and my average taxi speed is 5mph so I turned final over the threshold and set the max down nice and smooth 100ft from the taxiway at the far end. For me, taxiing into town is the most challenging part of the flight, bordered by trees and tall grass the narrow taxiway is on a slight incline, and my minimax is a taildragger without working brakes!

The trick is to S turn on the down hill to keep the speed slow enough that you can stop at the stop sign at the top of the hill!

Stopping at the stop sign made for a perfect photo op, note Brian on the corner waiting to take his pic of my max in front of the water tower.

When I fly with Brian it is more 2 pilots flying to a common destination than a group flight and the next leg from Beaumont to Alley Field in Douglas was a good example of that. I set the throttle at 5400rpm, a good economy setting for me yielding 53mph IAS and 3.2gph fuel burn. Even though Brian took off ahead of me I was able to find more suitable wind conditions about 100ft higher than he was flying and caught him quickly. I beat Brian to Douglas by about 10 minutes and as a result I was able to get a couple great shots of Lawrence Alley landing his clipped wing cub and of Brian when he finally got there!

Brian expertly guides his quicksilver to the runway

I took this shot shortly after landing at Alley Field, It is my favorite pic of my minimax to date

One Response to “Breakfast at Beaumont”