My New Year’s Resolution for 2012 was to limit my television viewing to no more than two evenings a week. Even when I do watch TV in the evening it isn’t more than 9pm to 11pm but, I decided even that small amount was eating up a lot of time for little return. It was a bad ROI (Return On Investment). I have kept to my resolution this past 11 months and because of this have read a number of books this year. One of these, “First, Over The Front” by Stanley Walsh is the subject of this report. 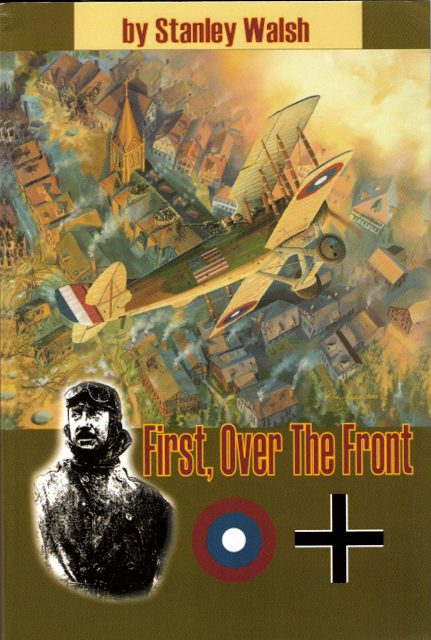 I have never read a book quite like Walsh’s piece before and found it very interesting on a number of levels. Basically, it is a collection of the letters of Lt. William G. Schauffler, Jr. who was a reconnaissance pilot for the American Expeditionary Force. Schauffler was “the right guy in the right place”. He was a man with a natural talent for observation. The U.S. Army recognized this and put him in the Aerial Observation Group where he performed admirably and was quickly promoted to Squadron Commander. For us, though, his talent as an observer serves us in the detailed letters he regularly sent to his family back home in America through his wartime stint. Because of his diligence and talent, “First” is a treasure trove of personal insights into the daily life of an Air Warrior during the first military use of The Airplane. If it were merely a collection of letters, though, it would not have its power. Due to Walsh’s skillful editing and by the imposition of his many “background” and explanatory notes, the narrative is made complete. This book is a window into a time that will never be again.

The War To End All Wars

WWI was billed at the time as “The War To End All Wars”. This in itself is a reflection of the mindset of the time. The Western World was making huge strides in science and technology and people really embraced the possibility of a coming New Age of Man. Without going into great detail, I think it is sufficient to say that in many cases the technology of the time had outpaced the imagination of the leadership. This was definitely the case when examining the overall strategy and tactics used by The Commands on both sides of the trenches. They simply were not grasping the totality of change that industrialization had brought to the battlefield. For the most part they were slow to update strategies that would best employ the new devices and massive scale of these devices created by modern industrialization.

While growing up I read all the stories I could find about The Fighter Pilots. At one time I could recite lists of the Famous Aces with their “kill” records. My Dad was a Fighter Pilot and to me there was no greater calling on earth than to be counted a member of this hallowed profession. “First” does not denigrate that belief but it does enlarge my recognition of the valuable contributions made by other aviation missions performed during The Great War and, by extension, the wars since. Even though “The Big Stars” of WWI were The Fighter Pilots, a good case can be made that their contribution to the overall war effort was minimal. Also, after reading “First” and discovering how the Aerial Observation Corps was utilized in conjunction with artillery, I now understand why the Fighter Aces worked so hard to shoot down observation planes. Notwithstanding the general “backwardness in tactics” of the French and German High Commands, the U.S. and French did quickly embrace the airplane when they found how useful it could be to increase the effectiveness of their artillery. I won’t give away too much from the book but in reading it I learned that they even developed “real time” reconnaissance methods for improving the aim of their weapons. This use of the airplane became decisive in ending the war with Victory for The Allies.

A Different Era In Many Ways

“First” does give a good account of battles and some very vivid recollections of the intensity of war but it is not primarily a “War Book”. The real thrust of Schauffler’s reports is his coverage of the human side of the conflict. By doing this he takes us into the world of the early 20th Century through the eyes of a contemporary – and, better yet – Through The Eyes Of A Pilot Of That Time. I think the most important thing he left me with was the overriding sense of Duty, Honor and Country he and his fellows had. They were also in search of Adventure. These were Virtues Men Were To Possess and Things Men Were Expected To Do. Not once in the book does he go into the type of lame “soul searching” commentary we are so accustomed to these days in books and films about war. He never burdens us with the faintest hint that he or any of his comrades would cry or whine regardless of the issue. He talks with great relish about besting the Germans. A few times when the Germans got the upper hand Billy is ready to turn back the next time and make them pay for it. He and his friends went to France to Win The War. Then, our nation had no silly ideas about “nation building” or “infrastructure development”. These guys went there to beat the Germans (sometimes called “The Hun”) and then come home. They were focused and intense. They were too busy embracing life to fear death. Their Christian upbringing taught them that if they did die in combat, they were still safe in Heaven. Therefore, their biggest concern was not to embarrass Themselves, Their Unit or Their Families with cowardice or failure.

There is much to learn from pilots like Lt. William Schauffler, Jr. He was a Pilot’s Pilot and went on to become an important player in World War II.

I can tell you I learned many new things about Warfare, America and Victorious Living by reading this book. I think you will, too.

ps: To order it, email Stanley Walsh at: stanlogs@dslextreme.com or send him a check for $23 (shipping is included) to his address at 4215 Miraleste Drive, Rancho Palos Verdes, CA 90275

2 Responses to ““First, Over The Front” – a review of Stanley Walsh’s book by Brian FitzGerald”