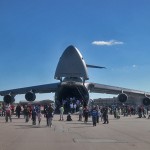 As part of my next movie I will be incorporating a series of music video segment featuring airplanes. It has been a number of years since McConnell Air Force Base had an open house so I thought it would be a great opportunity to get some air show pix. It was. Highlighted by the USAF Thunderbirds, each day was filled with excellent aerial (and some ground) spectaculars. Sunday was the complete show due to an absolute last minute cancellation of the T-Bird show due to a rapidly approaching thunderstorm. The Birds made up for the Saturday loss completely on the following day.

I was shooting video both days and never had a down moment. Sunday, my Daughter Bevin came with me and brought a still camera to record some of the displays for you to see here. Because of the limitations of the little pocket camera I asked her to concentrate on the static displays rather than the aerial demonstrations. It has a telephoto lens on it that is really poor. She got some great stuff and did shoot one shot of the Thunderbirds in a vertical climb that has joined my pantheon of all -time great shots. 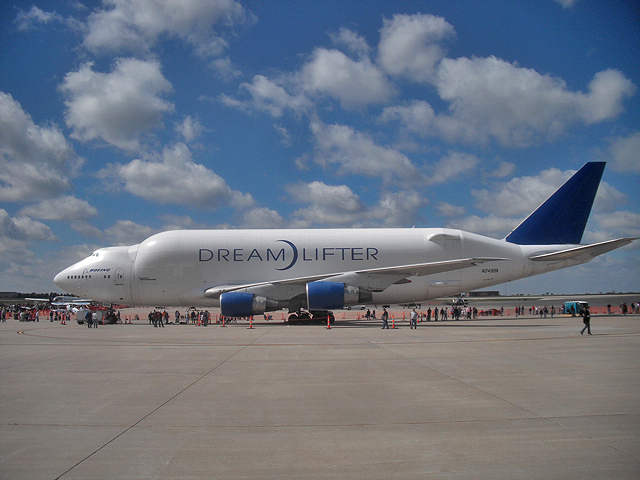 I have seen one of these in the skies a few times over Wichita. It is a highly modified 747 used to ferry 787 fuselages around the country for assembly. I was told there are 4 of them in existence. I was too busy to get much time with it but it looks to me like the tail section hinges over to allow insertion of the cargo from behind. 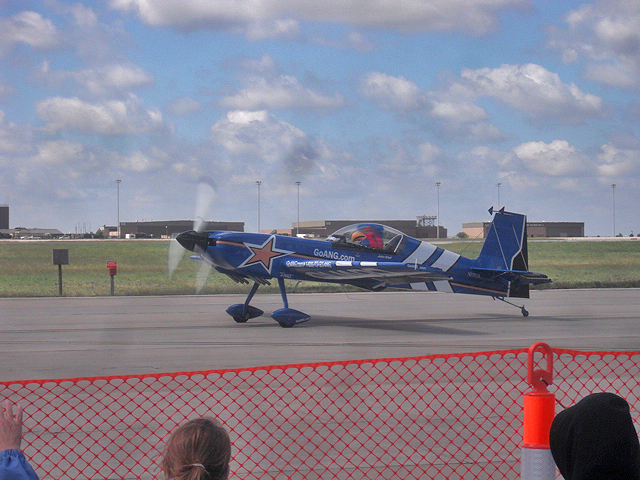 John Klatt taxis out to do his show 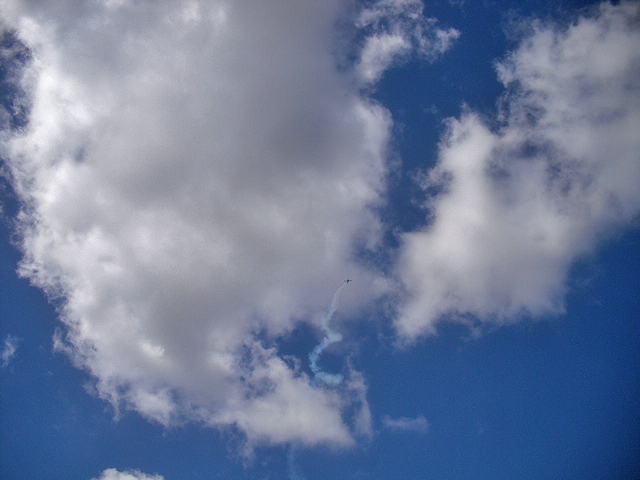 I had never seen John Klatt perform before but he is one of the best around. His routine is extremely athletic pulling a lot of G’s and in constant movement and stress. His Staudacher S-300D is a real monster. 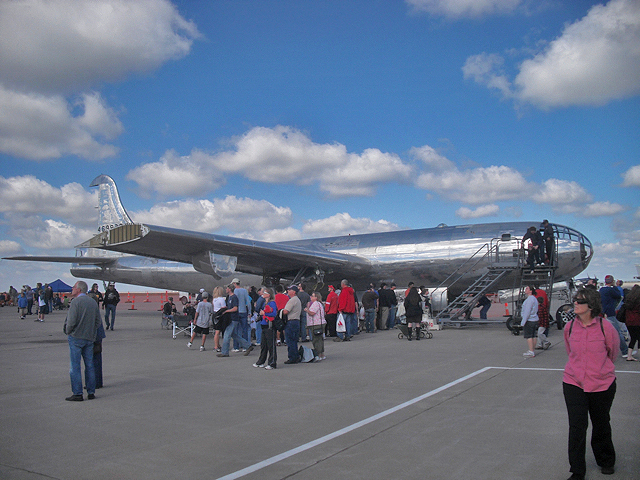 “Doc” was there. This B-29 is to be part of the Kansas Air Museum and is nearing completion of its restoration. The B-29 is the only airplane to have delivered a nuclear weapon in time of war – twice. 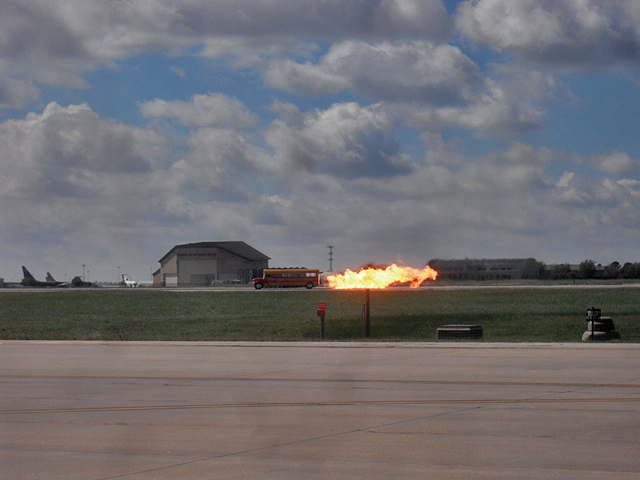 I alluded earlier to some “ground spectaculars”. This was one. This school bus is powered by one of the jet engines that moved the F-4 Phantom through the air. After doing the fire and smoke run for the crowd as seen above he took it up to just shy of 300 miles per hour!

The other “ground spectacular” that we weren’t able to get a still photo of was the US Marine Silent Drill Platoon. You have probably seen these guys on TV in the Marine recruitment commercials standing on mountains or on picturesque beaches. They are flawless – art in motion. 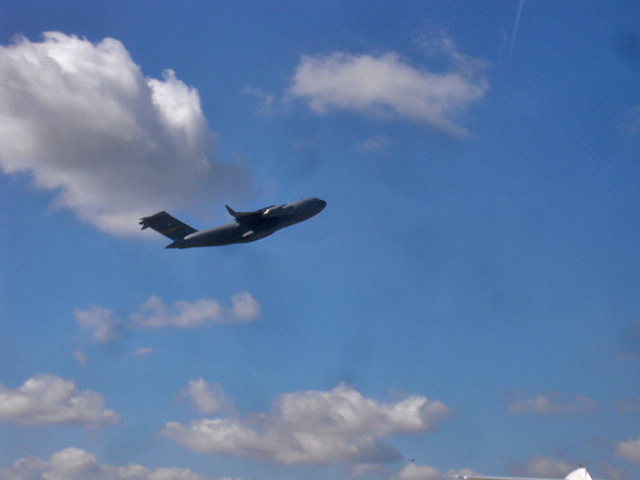 This was taken on Sunday. On Saturday they did a max performance take off that looked to me like a 45º angle off the deck. This plane is very impressive. On another occasion I saw one land in very short distance and then back up. 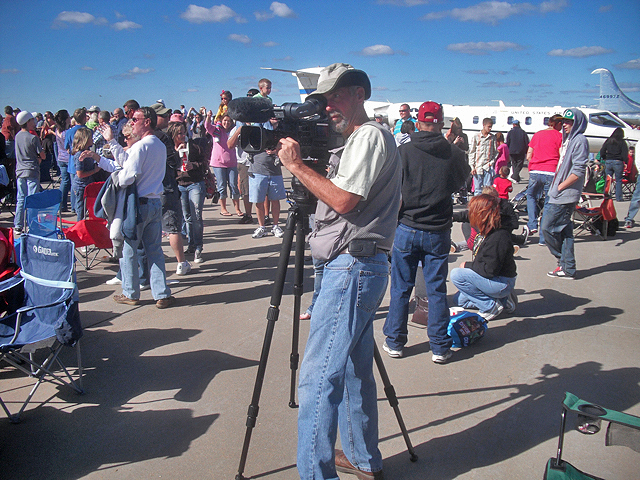 Bevin’s Dad at the office • Photo by Bevin FitzGerald 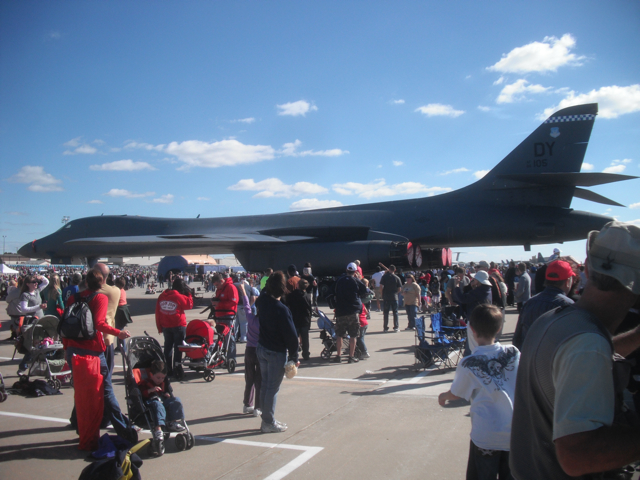 The crowd surrounds a B-1B Bomber • Photo by Bevin FitzGerald 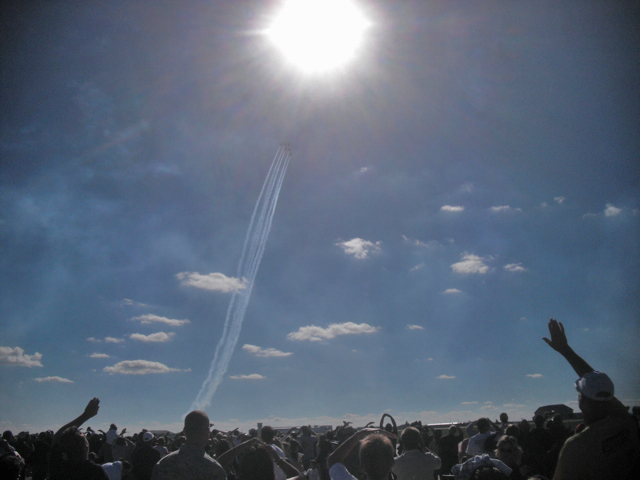 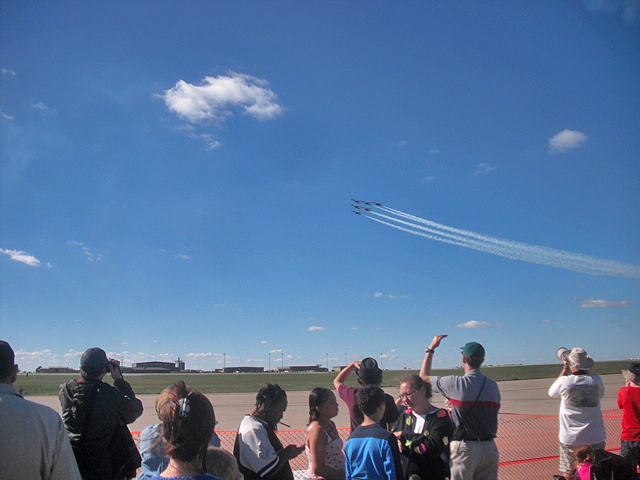 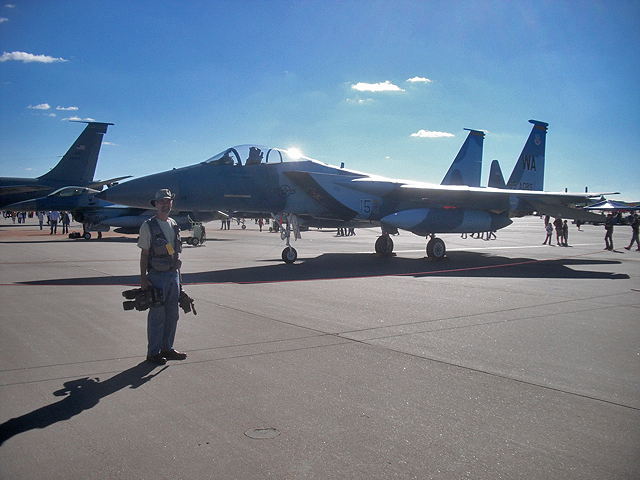 The F-15 has the best fighter record in history. It has never been shot down by an enemy aircraft. 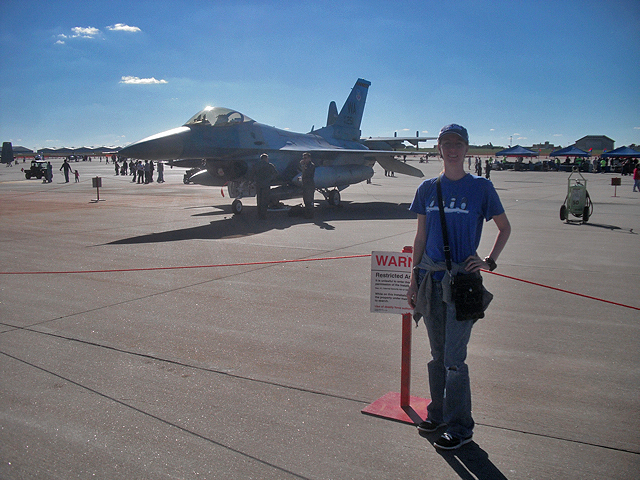 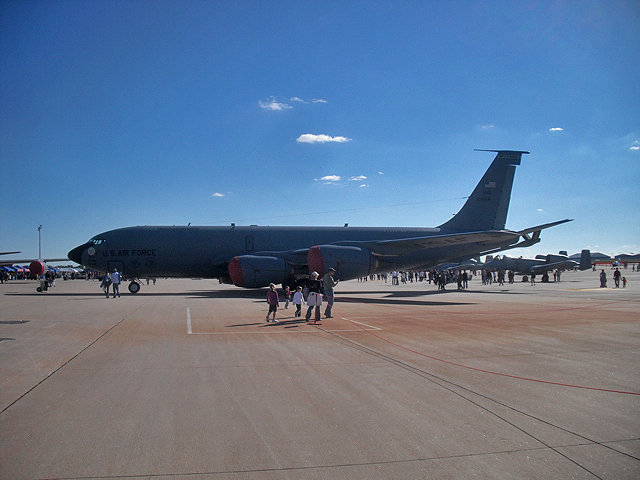 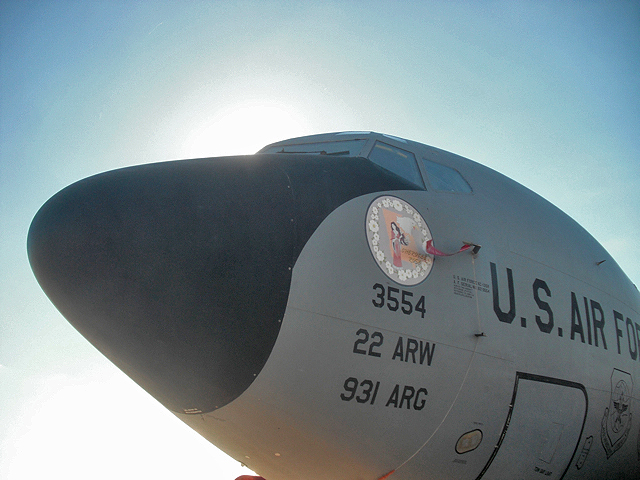 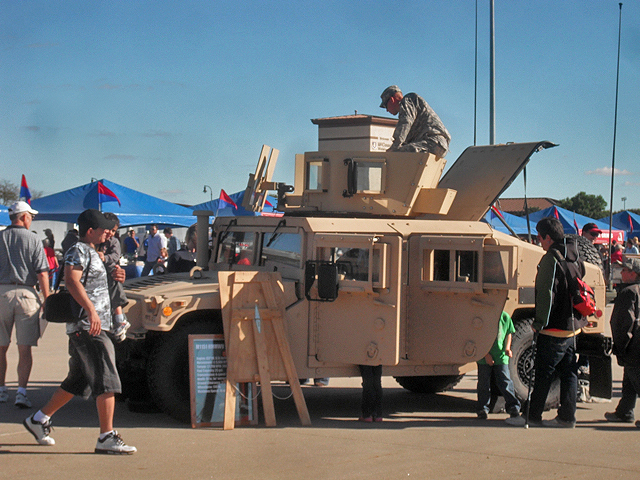 We took this after the show was over. The troops are breaking camp but people still want to see… 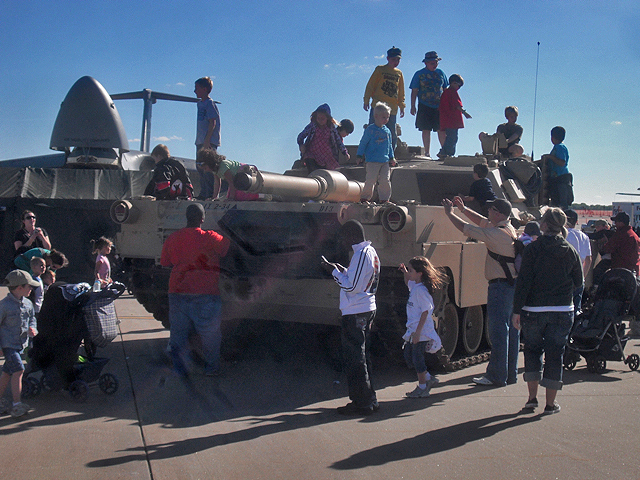 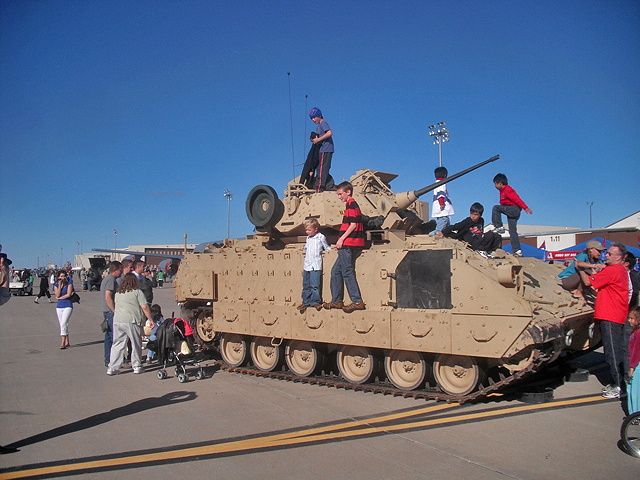 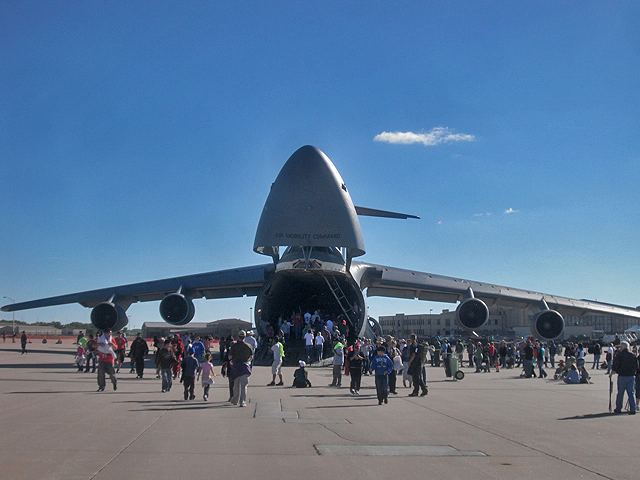 My Dad was a career officer of the United States Air Force so I grew up around all of the above. At one point my Dad was stationed in Bangkok, Thailand and the rest of my family was there but I was going to college at The University of California Sacramento. The military’s policy was to give the “away” dependent one ride on the government per year to see his family. So, once time I was able to travel to Thailand in one of the behemoths you see above. If you look inside the bay you will see a ladder/stairwell on the right. That actually leads up to an airline-like room with reclining chair seats and such (at least in the configuration I traveled in). What I remember is the incredible smoothness of the takeoff and landing. You could barely tell when the transition from ground to air – air to ground was made. We stopped at Wake Island in the middle of the night and I walked a moonlit beach featuring a large beached ship from WWII. It was surreal.