It is Saturday, 14 Jan 2012 and today the temperature in our area topped out at about 45 degrees. When I saw the forecast this morning I set my sites on some afternoon flying. This would have to wait until I put in about 5 hours of editing my next installment of “That They Might Fly Again”. I’ll be updating my website soon to preview the subjects in this new video. Today I was in my third edit session on a music video showing “The Gathering of Eagles” event that is held at Gardner, Kansas every year. After finishing this I will have one more interview to finish, shooting and editing my stand-ups and then building the support graphics for the discs. Once that is completed I will release it. I’m thinking it will be in March.

Anyway, after I finished editing I grabbed all my flying gear and headed out to Selby Aerodrome where I keep my plane. As I pulled up I saw Bill Bailey’s truck. This could only mean he was out flying or was in the hangar working on his Taylorcraft. I walked inside and here is what I saw. 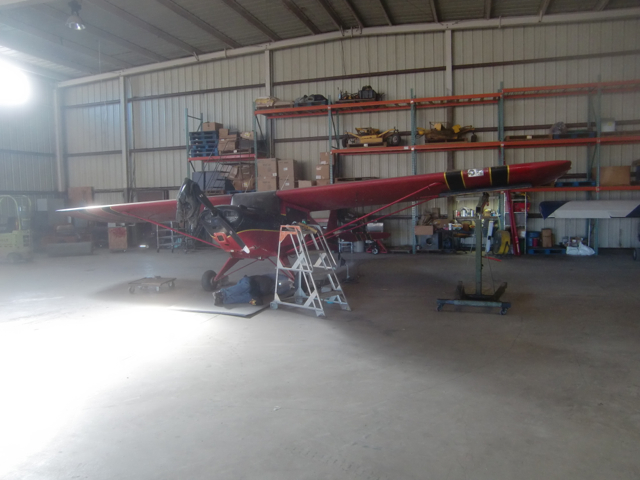 Bill Bailey underneath the fuselage working on his T-Craft brakes. 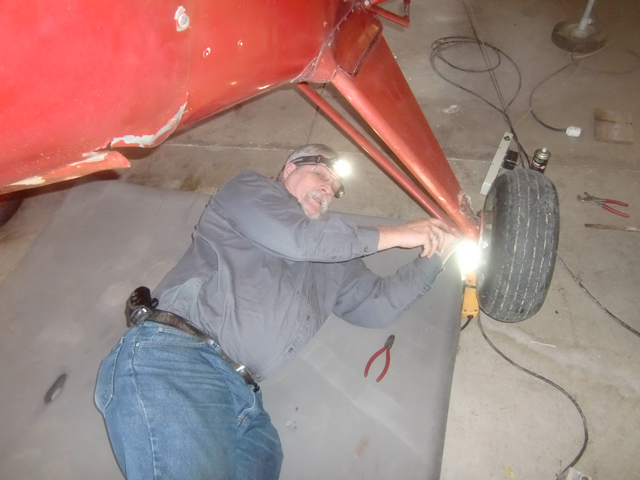 Everyone around me is conscripted into being an actor in my on-going movie. Bill is playing the part of the guy hard at work while I go play.

After I got my Quicksilver fueled up and pre-flighted I pulled it out front of the hangar and donned my snowsuit and new heated gloves. As you can see below, by this time Bill had completed the brake job and had wheeled the plane out to test taxi it around. 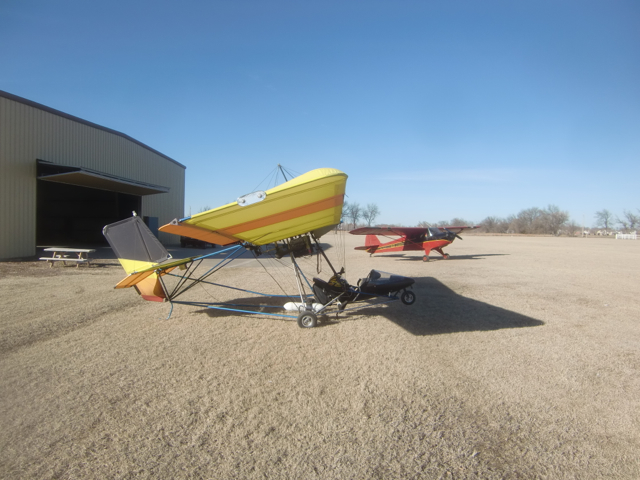 MXL+ and Taylorcraft perched under a clear, Kansas sky.

I titled this Flight Blog entry “One Leg of the Southern Triangle”. I suppose now is a good time to explain my meaning.

Even though I like to fly to a number of different venues around the area I do have some favorites that I frequent more than others. Two of these landing spots are Alley Field on the East side of Douglass, Kansas and Cherokee Strip on the Southeast side of Udall, Kansas. When I stop at both of them my flight path makes a Southerly Triangle on the map so I have taken to calling it The Southern Triangle Route. Today I will head to Douglass first. My thinking is that the NNW wind will subside significantly by late afternoon when I will be making my trip back from Udall. It will not slow me down too much.

They came from all over the region to herald my landing

Well, not exactly… But Father & Son Alley and Larry Hastings and some other guys were at Alley Field when I dropped in. Lawrence has put in a really nice hangar so it provided a great backdrop for this shot. “The Home of the Bulldogs” inscription on the water tower just makes it that much better.

Terry Alley had something special to show me. Their new Champ! 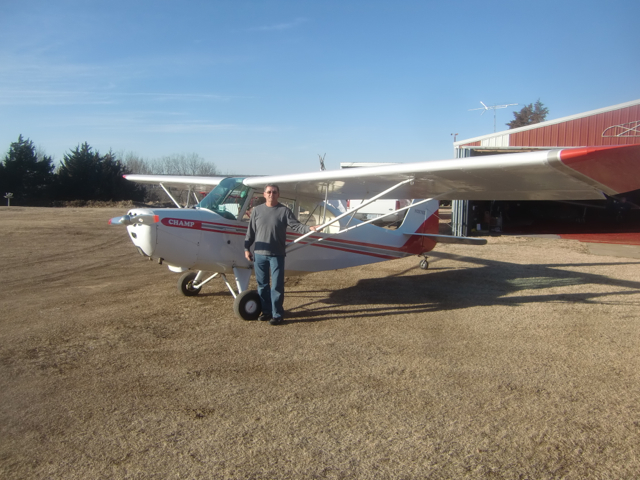 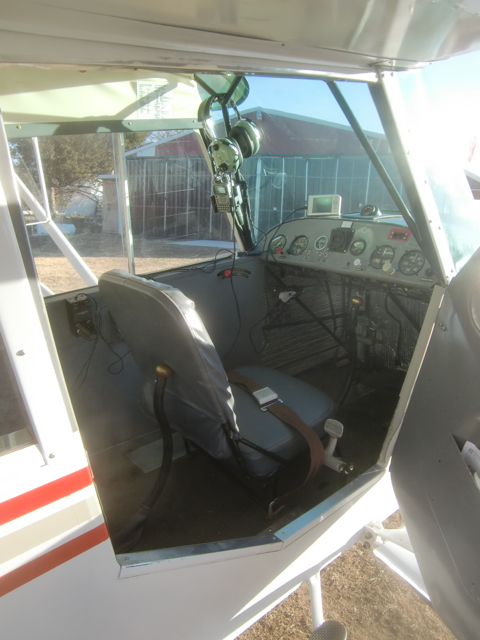 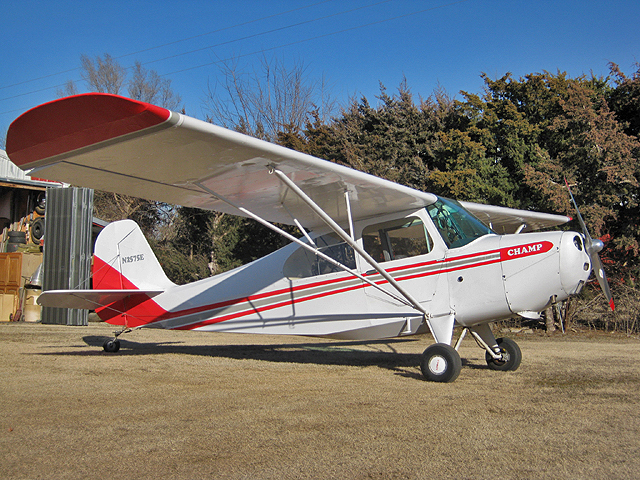 I remember last Summer that Lawrence and Terry were wanting to sell the J-3 that had served them so well for many a year. Lawrence was getting tired of propping the Cub and they decided to move up to a Champ with an electric start and other amenities. From my walk-around, I think they came out ahead by a mile. Everything about this Champ looks great. Terry said it floats more on landing so he has to come in a little slower to Alley Field than he did with The Cub. The reason is that it has about 10 more feet of wing! Be looking for it. I’m sure you will agree with me it is a sweet ride. 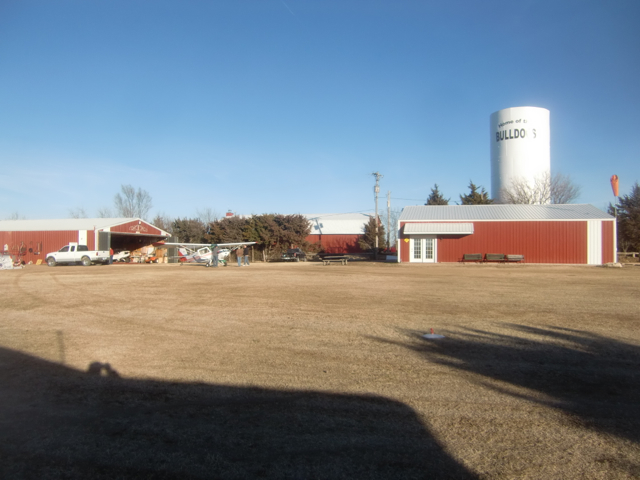 The shadows lengthen signalling it is time to leave

After taking a look at the Champ I bid adieu and started my motor. As I turned around I saw Larry Hastings heading toward his BeLite. Larry bought it from Terry at the end of the summer. I already had my earplugs in and helmet on but I heard him say that with the new Hirth engine the plane is “quite sporty”. I think he said he can do about 80. (Let me know if that is right, Larry…) I had to document this new Plane/Pilot Duo. At this stage that meant digging through my three layers of flight clothing to fish out my trusty pocket cam. I told Larry I would be looking forward to flying together this coming season. 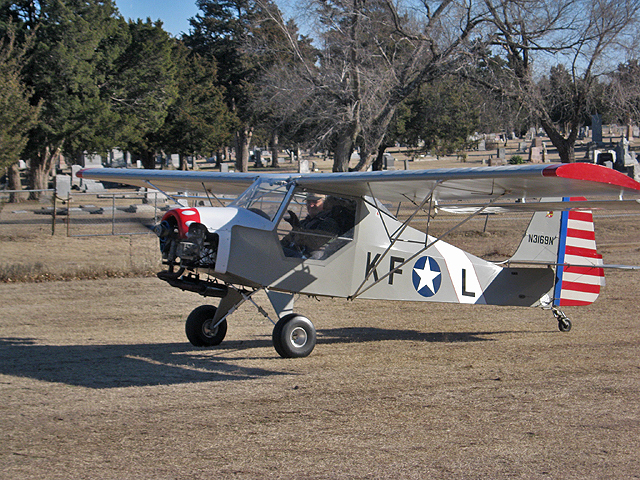 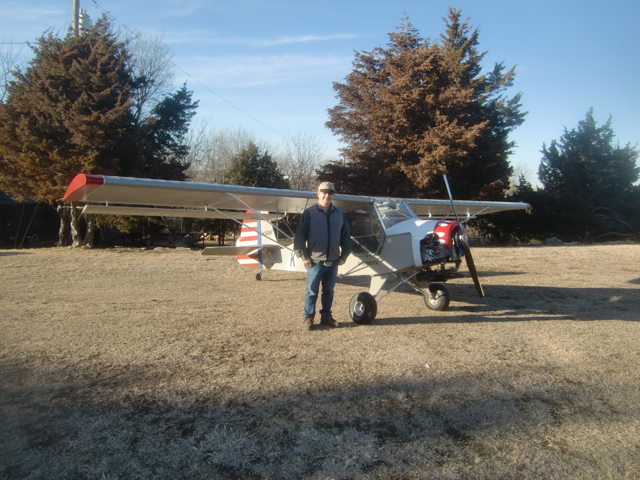 Larry Hastings and his new ride

I rolled onto the active first. By this time the wind had subsided significantly but was still out of the NNW. Regardless, I elected to takeoff downhill and downwind. If you ever drop into Alley Field you will be aware that it is on a significant hill. Sometimes it makes more sense to just take off down the hill rather than taxi down it when the wind is of minor velocity. Today was such a day. Larry elected to do likewise. After putting a few feet under us we made some passes at the field and then headed out. Here are a couple of shots Terry Alley took as we took off and left the area: 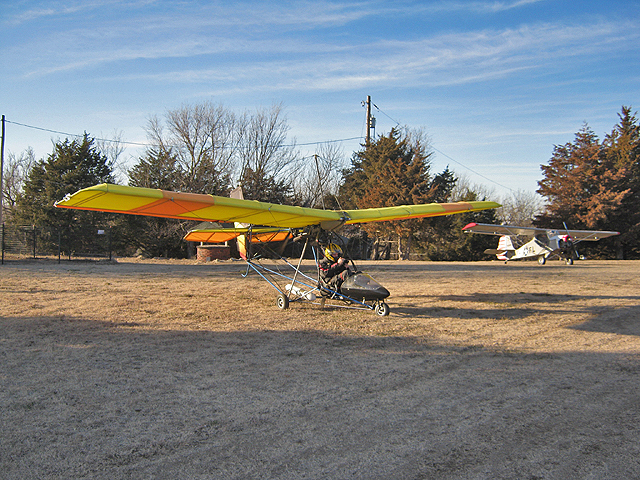 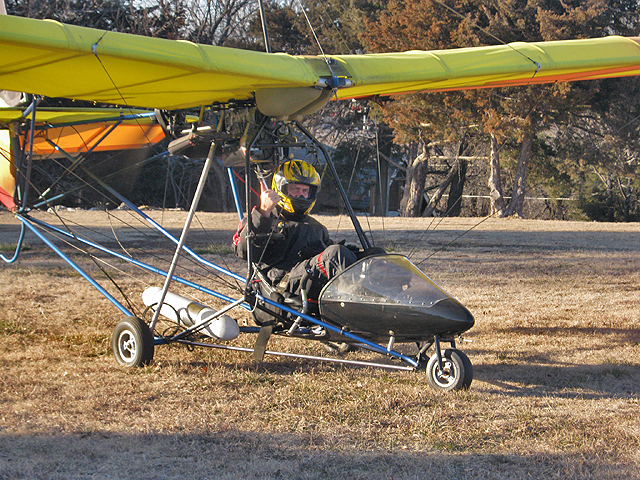 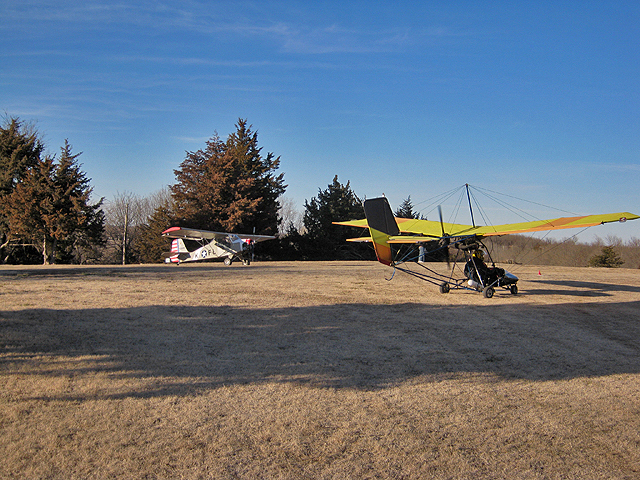 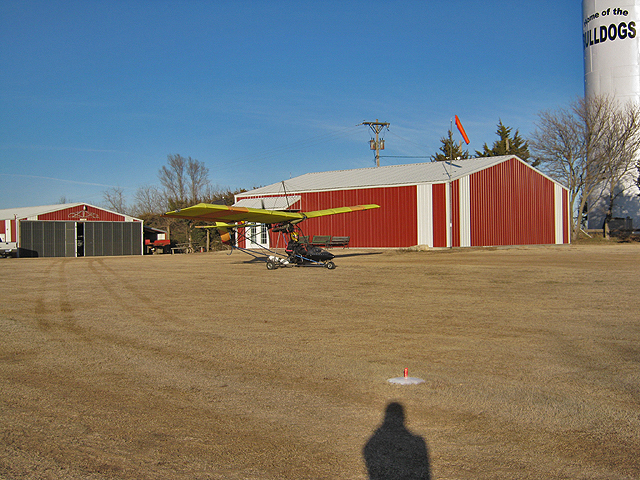 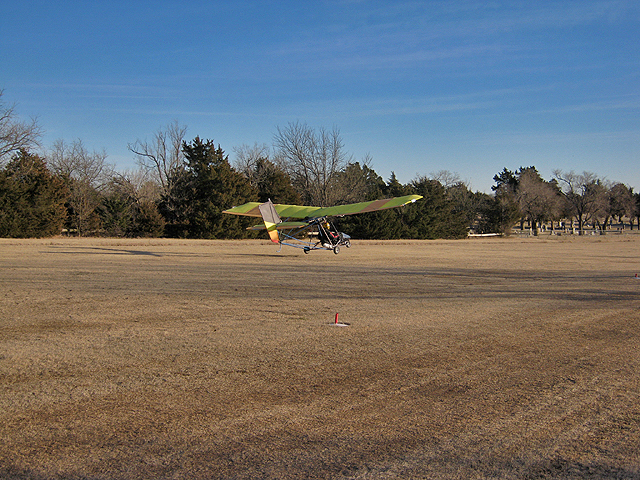 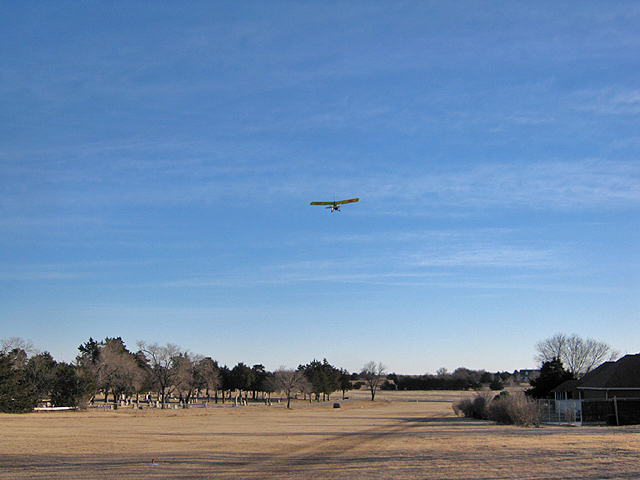 Now to close the loop on the title of this piece.

As I soared into the crisp air above Douglass I could see the sun was fairly low in the Western Sky. I decided I could drop into Cherokee Strip another day. This change of flight plane meant that I would only complete one leg of The Southern Triangle. I did make a slight detour, though, to swing through The Butler County Airpark. A guy I didn’t recognize was excitedly showing a toddler my approach. I waved as I passed by and then performed one of my “max pull-ups” for them. Also, Chuck Gantzer was standing outside his huge Hangarhouse with some other guys. I waved at them, too. Normally I would have stopped but since it was getting late I passed on through. If you do a search of this Flight Blog (Keyword:Chuck) you can see a number of write-ups regarding Chuck’s Hangarhouse. 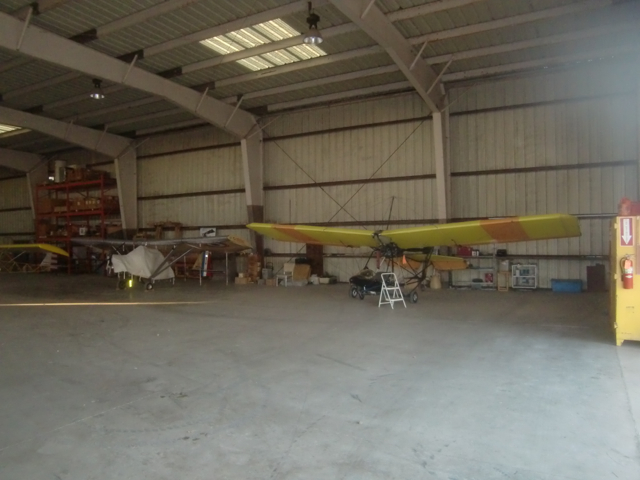 I couldn’t think of a more creative closing shot so I grabbed this as the hangar door was going down.