One of the most distracting comments that a photographer faces today is: “Are those photos real”?

Last year I was selling aviation photos/prints in an area where traditional artists were also selling their wares, i.e. hand painted canvases.  My photographs were also printed on canvas because that’s what I sold the most.  It got to a point whereby nobody was interested in my double mounted/framed pictures, but as soon I transferred them to canvas, they literally took off!  (Excuse the pun).

Initially I had to deal with some fairly aggressive and disparaging comments – this simply is not art!   “You cheat!” They would say. “Photographic software like Photoshop does it all for you and you just print them off”.  Out of some 25 fellow artists, there were two other photographers, but they had been there longer and although subject to one or two snide comments they seemed to be accepted.

I wondered how the hell I could combat this prejudiced view, tinged with an element of jealousy?   “Well Keith, (I said to myself) I’m not giving up, surrendering meekly or arguing”. So, I decided to play it cool and bide my time.  Gradually, my aviation pictures began to sell and my displays were attracting the most attention from the passing public.   Before long, my success attracted the formerly disparaging artists’ attention. They began to sidle up to me to ask how I was producing these canvases.

I explained that my study was my studio, my desk was an easel and that my computer monitors were my canvases.   I also explained that it took as much hand/eye co-ordination and the understanding of colours and use of shade/light to produce such pictures – exactly the same skills they utilized producing an oil painting or watercolour.  In addition, one had to be more than conversant with all the technical aspects of photography and printing. 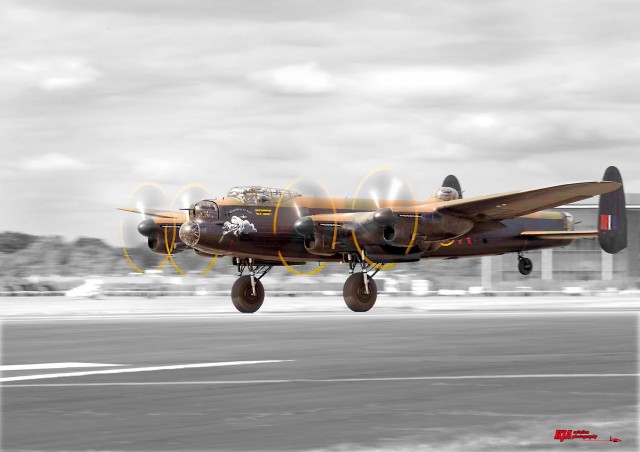 Firstly, you have to know what will make a good picture. Generally it is very difficult to impart such knowledge; it is instinctive.  The aircraft shown above is an Avro Lancaster of the Battle of Britain Flight taking off from FarnboroughUK which is one of the oldest airfields in England.  The challenge was to decide how I could enhance this picture that contained so much greenery and activity in the background.   Most aviation enthusiasts like airborne shots, so I knew that this picture of the lift off would capture the eye, but the aircraft needed to be separated from the background artistically.

Firstly, I duplicated the shot and changed it to black and white.  Then using a graphics tablet, I proceeded to cut/erase out the black & white layer copy with the graphics pen.  As I pointed out to my artist friends, this took me nearly two days to get it right using the same skill of hand that they possessed.   I even pointed out to them that “old fashioned” photographic techniques were brought to bear in order to achieve the image seen above; i.e. cropping, burning, dodging and enlarging.  It slowly began to sink in. Especially when they learned how much a roll of canvas cost, the type of printer and special inks I used and that I made up my own wooden canvas frames.  It began to sink in!

Having an engineering and technical background and thus being familiar with such drawings, I utilized these skills to produce pictures which I felt were unique…..

Slowly but surely, over a 3 month period, I won these skeptics over.   Now I am asked for all sorts of advice about cameras, lenses and printers. I was even asked to copy an original oil painting by one of these artists.  My canvas copy was actually better than the original.  One of them now takes photos of their subject matter before painting.

I am not unique. I am totally self taught but honored to be in the company of fellow photographers, graphic designers and Photoshop artists who do fabulous works of art.   Leonardo Da Vinci would be proud!