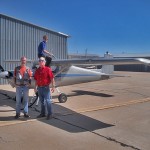 On the 21st of September I drove up to Great Bend, Kansas interview Bill Koelling about his 1938 Cessna Airmaster. We had a lot of challenges with the wind that day and even though we made a valiant effort were not able to complete the interview. Because I like to wrap up these interviews in a reasonable amount of time I kept in touch with Bill by phone and email and after a few interchanges we picked Thursday the following week. I was telling my buddy Doug Moler how interesting the Airmaster was and also about the Great Bend airport to see if he wanted to accompany me on the drive up there. He responded by suggesting we fly up there in his Cessna (C-150) which is a 1959 model with the straight tail. That sounded like a much better deal to me except I wasn’t convinced we could get all the video gear in the plane that I needed to take along for the interview.

Gear stowed behind the seats

After I pared it down to what I absolutely had to have, we were able to fit all my video gear behind the seats of the 150. What you see are an assortment of lights, light stands, microphones and cables. Underneath this pile is my camera in its case case and my tripod.

From inside the Moler Aviation Cathedral

As Doug was opening the hangar doors I took the shot above to give you a glimpse of some of his airplanes. He has an excellent combination filling the spectrum from strictly fun to fairly practical. I would call the Bonanza “fairly practical” because while it can get you places in a good amount of speed and at a pretty “far piece”, it is also fun to fly (not many planes are “un-fun”).

On the strictly fun side of his air stable is the TEAM Airbike shown above. It is an ultralight style, single seat, open air airplane powered by a 447 Rotax engine. He has a PowerFin on his like I have on my Quicksilver.

Here’s a candid shot of one of the more important aspects of the pre-flight – cleaning the windscreen.

Brian gets ready to take the left seat

Although I received my Private Pilot License in a C-150 back in the late ’60’s, I had not flown one since then. All of my pilot time since has been in ultralights – Quicksilvers to be exact. I found the Cessna easy to transition back to but would like to have done a few more landings and general air maneuvering. But, as it was, we were on a mission and needed to get to Great Bend and return in the minimum amount of time. Our path was near “arrow straight” with 3,000′ altitude held.

When we got there Bill had pulled the yellow bird out of the cage. I was introducing him to Doug and decided to snap this picture. Both of them recognized each other from various fly-ins past.

Before we could get started I had to respond to Bill’s excitement regarding a new arrival at the Great Bend field. He wouldn’t tell us much about it but just bid us to jump in his pickup and take a short ride down the field. Since this is a former WWII B-29 training base you don’t mind getting a ride to the other end of the field.

We pulled up to what was obviously a commercial hangar although since we came in from the flightline side no sign was immediately available. After Bill called out for a minute, Tony Martinez, the owner of Tony’s Aerial Spraying, appeared. He opened his hangar door to reveal the object of Bill’s excitement and a marvelous site it was: a beautifully restored 1949 PA-18 Piper SuperCub.

More of the SuperCub

Apparently Tony had just finalized his deal with the Cub’s previous owner and had just brought it back to his shop the evening before. I generally would have taken the shot above from a little bit further to my left but this is a working hangar. There was a workbench and some tool cabinets in the way to my left. Also, “in the way” was the impressive machine you will see next:

While the new PA-18 is the “big boy’s toy” of the hangar, it’s hangar partner is this monster: a 1998 AT402A Air Tractor. Every once in a while when I have been traveling across Western Kansas on the highway I have had the great fortune to see one of these in action. This is technology’s state-of-the-art method for getting agricultural chemicals to the crops efficiently. Just looking at it tells me it must be a blast to fly also.

Like myself, I found out Tony grew up as an Air Force kid. His Dad piloted the U-2 as well as other aircraft during his career. Tony got the “air genes” from his Dad and went into the agri-spray business 32 years ago. That fact (32 years) will tell you he must be a good pilot because spray-plane-ing is not an occupation for casual fliers. The speeds, load changes, low level turbulence, power lines and a host of constantly changing factors interplay to make piloting a turbine-powered spray plane a challenge not many dare to conquer.

I missed an excellent opportunity when I forgot to ask Doug Moler to get a picture of me interviewing Bill in the hanger. So, after the interview was over I tried to make up for it by getting a shot of Bill & I in front of his bird before Doug & I lit out of town.

I got one of the line guys to take this picture of the three of us partaking in what I would call the stark reality of flying since the beginning of powered flight. What is that reality? Aviation only exists as an appendage to the oil business. No Gas – No Fly.

Some of us are looking forward to Electric Aviation. I suppose some of you might retort that we will just be exchanging fuel hoses for extension cords. That may be but don’t discount solar cells…

Another buddy of mine out in Las Vegas has made steps in the direction of electric flight. He has built a machine that will aviate him electrically for significant periods of time. Maybe I can get him to put up an article about it here on the Flight Blog soon.