I knew it must be my Birthday when I found myself in the Driver’s License Office getting my license renewed. There’s no reason to rush anything like that.

I had been pushing some deadlines at my business for about a month and really was looking forward to a nice weather day so I could grab some air. 27 May 2011 turned out to be that day and I shot the picture below to give you some idea of the nil wind conditions right before I started the engine. (Note: Some of you may think the slight angle of the wind sock indicates wind. Maybe where you live but not here. When we have a really windy day around here the pole is flexing, the sock end is fraying, and the sock itself is thrashing from left to right in a 45º arc. Today was what I call “nil” wind conditions. 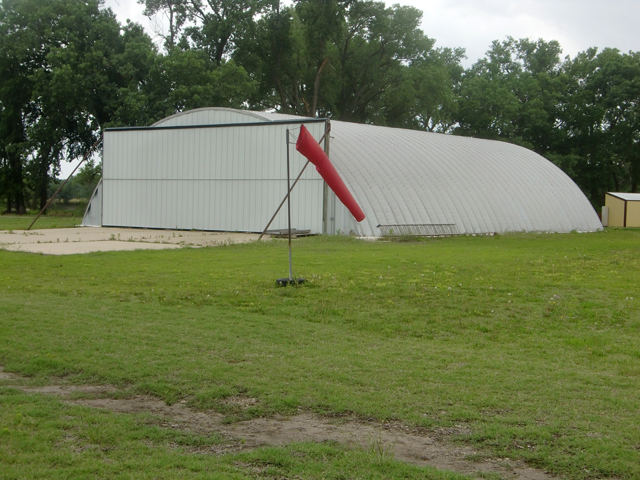 The Windsok shows all of 3 mph from the South

Aloft it was more like 8 mph but that was no big deal. 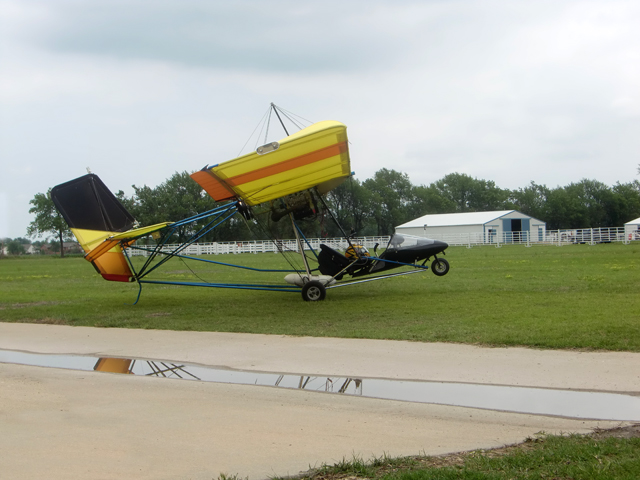 The MXL+ partially reflected in some standing water

We had been having some extremely rainy weather but interestingly enough, the field was dry. Nonetheless there was water standing in the shallow gutter at the entrance/exit of the Selby Hangar and I liked the way it reflected the airplane. 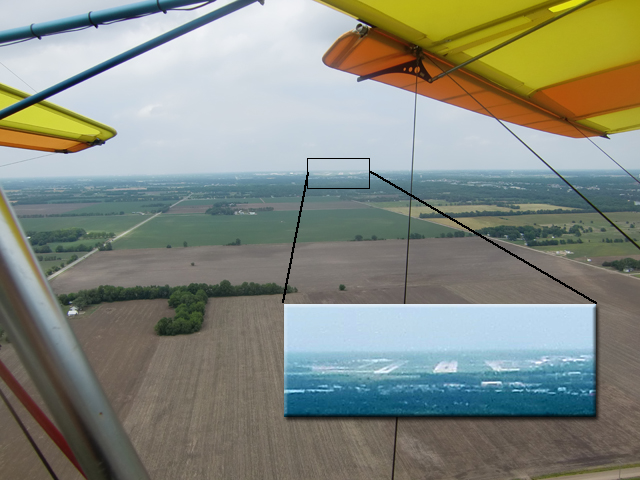 Looking down both barrels

My home field, Selby Aerodrome, is just outside the control zone of McConnell AFB. As soon as you take off and go less than a mile to the east you see what I call “looking down both barrels”. I’ve never been able to get a good shot of it because these pocket cameras have an overly wide lens that does not effectively replicate what the human eye is seeing from the same point of view. Zooming in is problematical because the shutter speed is not fast enough and you increase the potential for a smear. This time I decided to go to PhotoShop and grab an insert of the scene so you could see what I mean. 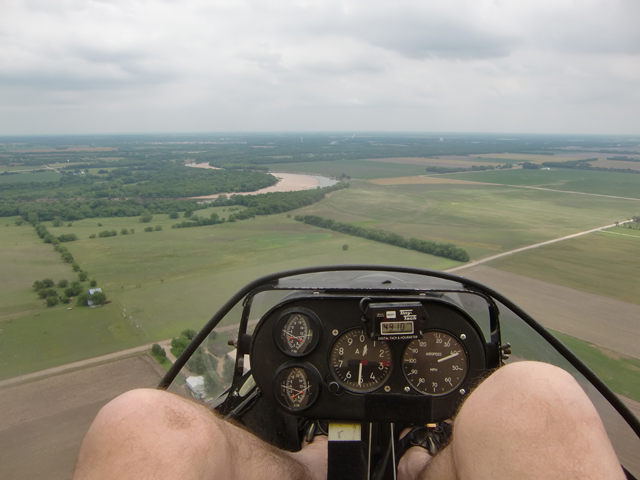 Warm weather has arrived at last!

As I turn to the South East, you see in the distance the Ark River meandering around Mulvane. I decided I would head up to one of my favorite stops – Cherokee Strip – in the town of Udall, Kansas. 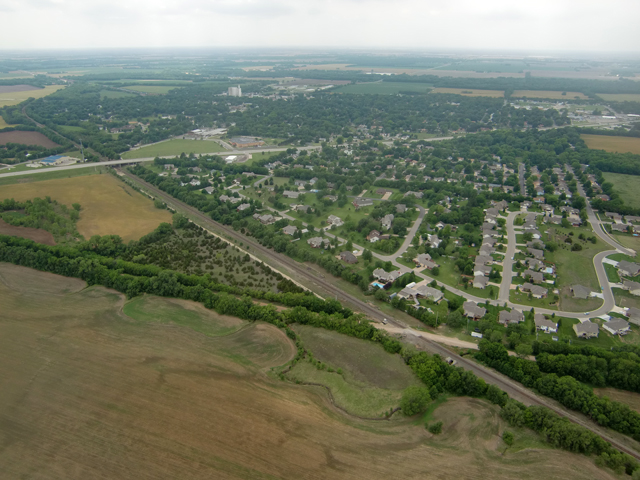 Usually when I head to Cherokee I go around the South side of Mulvane but today I decided to take the Northern route. Mulvane is a nice little town South of Wichita. My family really likes Luciano’s, the Italian restaurant there. I suddenly realize that describing a restaurant named “Luciano’s” as Italian is redundant… 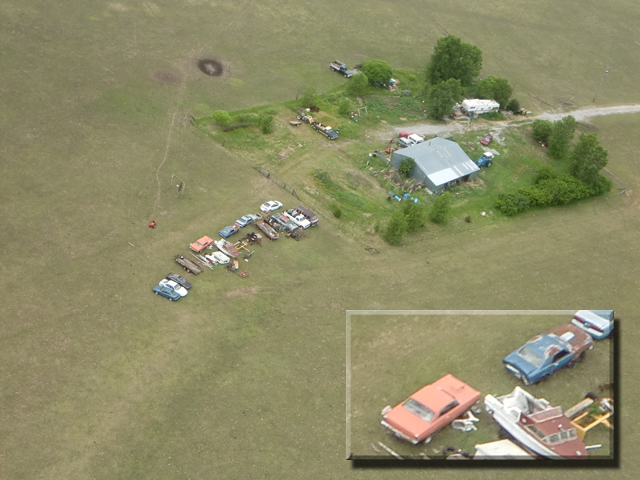 A Roadrunner or two?

On the way to Udall I saw that somebody was storing a bunch of vehicles out in a field. My eye was drawn to a couple of them that look like 60’s Roadrunners. I was at about 1,000′ and didn’t feel compelled to swoop down for a better look. 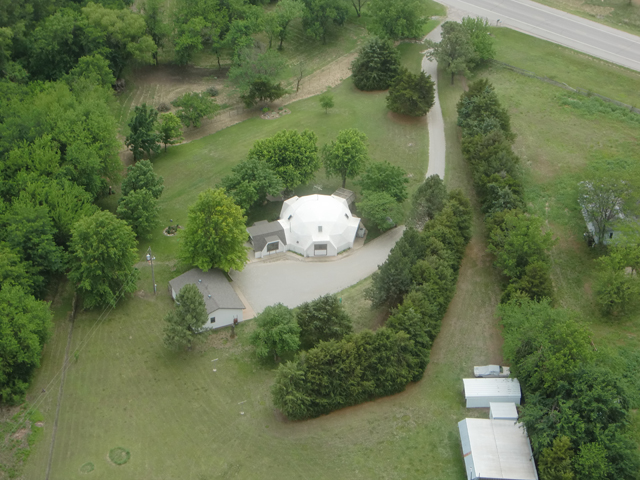 I have always been intrigued by dome and geodesic houses. They are interesting to look at but for me are not practical. The strength of the design is impressive but there is too much space near the walls that is hard to use because of “head clearance” issues. That is why you see them raised up on vertical walls now. 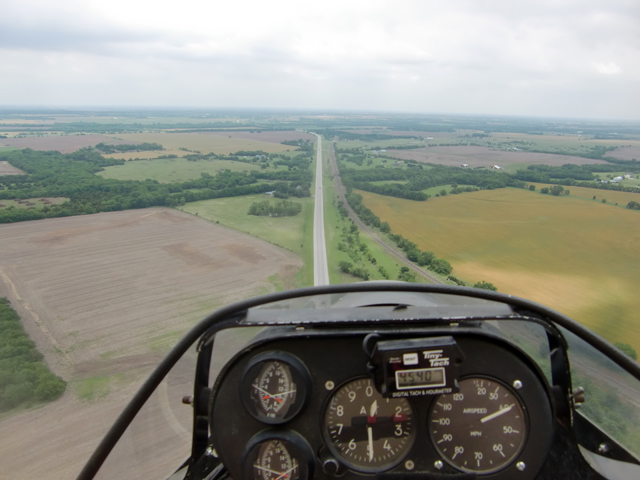 The Road to Udall

That is K-15 right off the nose. It heads to Udall, Kansas. I wanted to center it perfectly off my nose but it was rather turbulent and I didn’t try that hard. Three shots was my limit today and this was the best of the three.

One thing I would like to note from the shot above is the low RPM I am showing (4540). 4-Stroke guys might not be impressed but for a 2-stroke motor 4540 is a pretty slow speed to be running and maintaining altitude in a Quicksilver. I have a 65″ two blade PowerFin out back that I really like. PowerFins are ground adjustable pitch props made out of composites. They are very efficient. This spring I bought a new gauge from PowerFin Propellers to better set my prop pitch. It is a neat little digital device and (assuming it is accurate) I was able to get the two blades within .05º of each other. Prior to that apparently they had been 1º apart. Between doing this and increasing the overall pitch of both blades I seem to be getting much more power to the air at lower RPMs. Last fall I needed 4750 on the tach to maintain altitude. 4540 is significantly less to maintain altitude. The whole point of this is to conserve fuel and thus increase my range. 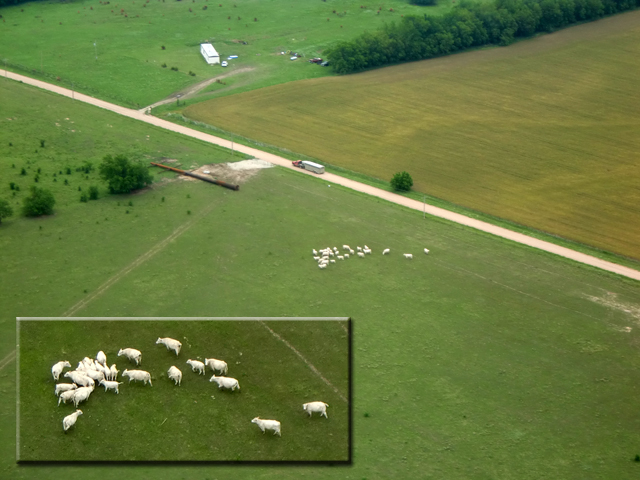 Most all the cattle you see here in Kansas are brown. At first from a distance, I thought these were sheep which you don’t see much of but when I got closer I saw they were cattle. I was at about 1,000′ when I took this. I make sure not to get too close to cattle or horses as you can spook them and they might break a leg or run through a fence. 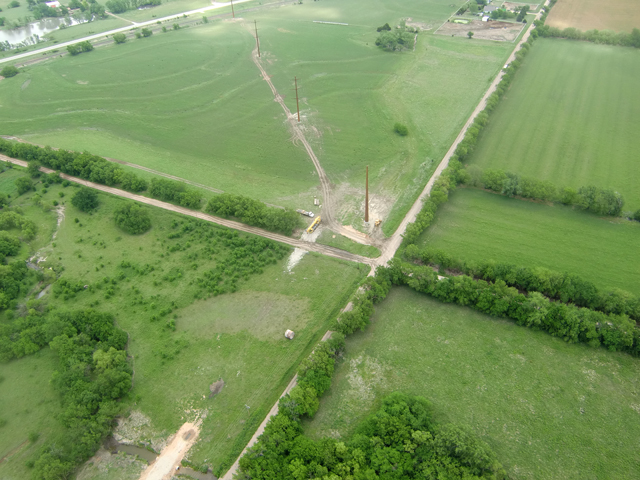 A new powerline goes up 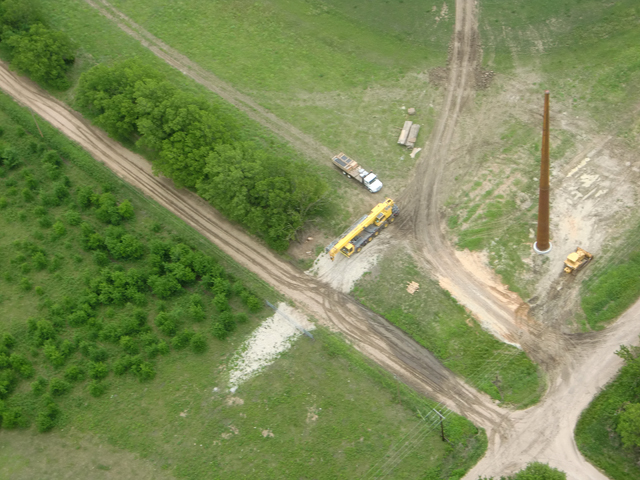 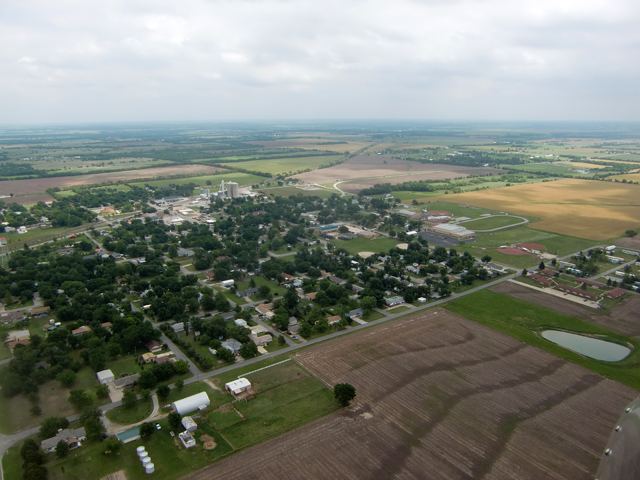 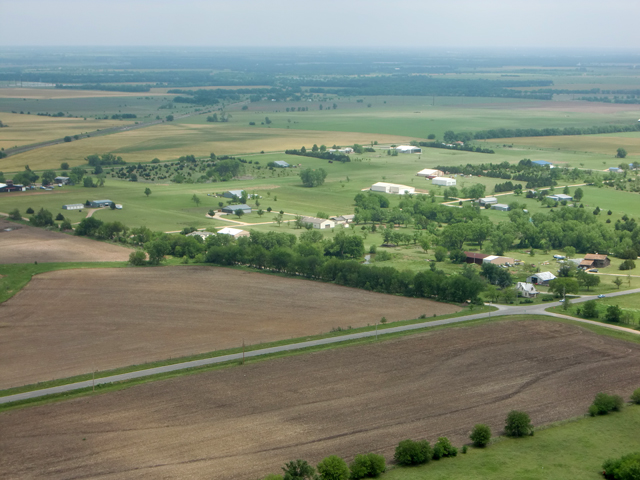 Just South of Udall, Kansas is Cherokee Strip. I have some friends who live here. It is a nice grass strip and a great place to drop into. 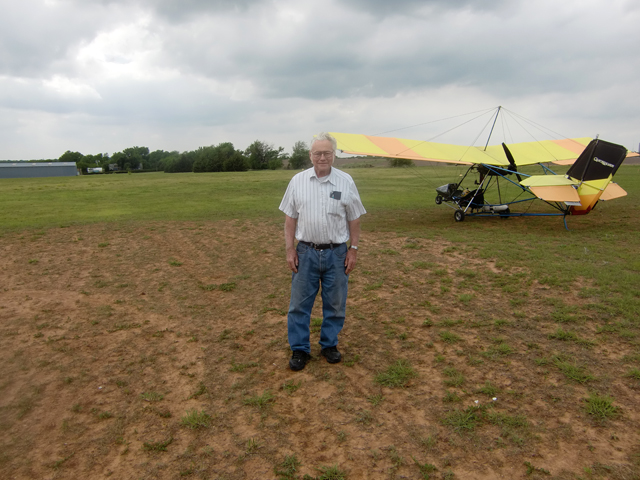 As I pulled up to Tommy Randall’s place, Neil Shaffer came out to meet me. We had not met before so I introduced myself. Neil has property to the north and owns a Cub. He has a grass strip on his land. 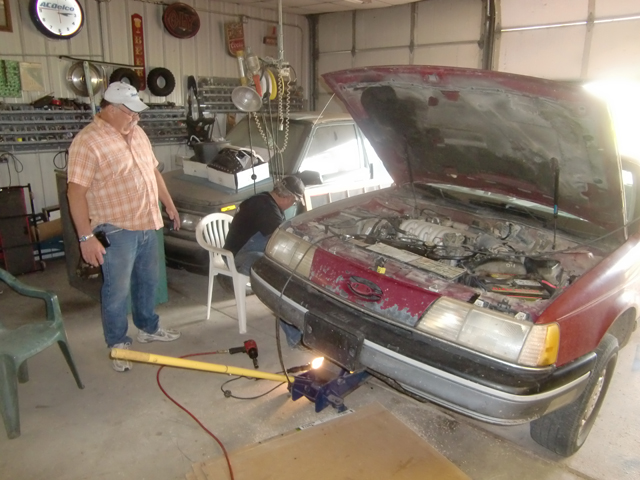 Here we see Jim helping Tom work on Neil’s car. It is always good to see these guys. Apparently Tom had suffered an accident in the shop some months previous and had fractured his upper arm. It was healing up pretty good but his buddy Jim joined in today to help Tom if he had any heavy lifting. 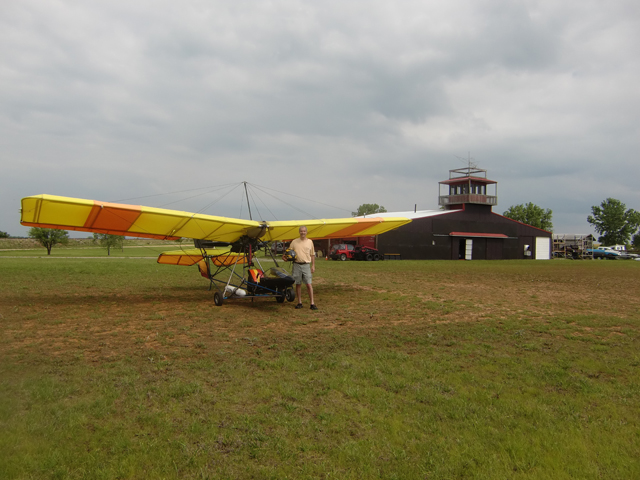 After hanging out with the guys for about 20 minutes I bid them adieu and headed to another favorite stop – Alley Field in Douglass, Kansas. I asked Neil to take the shot of me above and he did a good job. 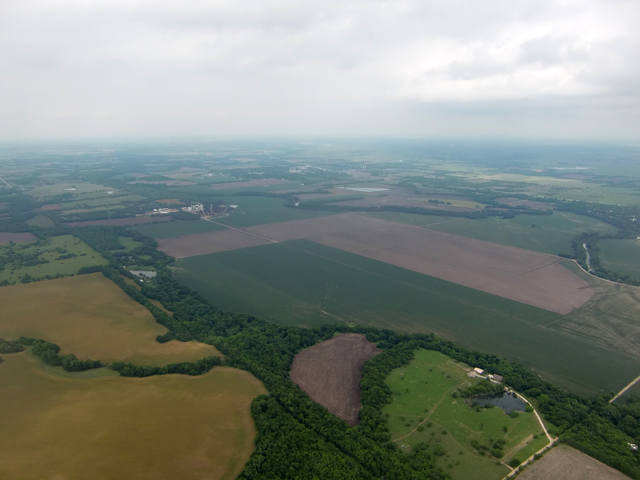 This is just after departing the Cherokee Strip control zone heading Northeast to Alley Strip. Sometimes we have visibility issues around here related to field burning but today it was strictly from high humidity. 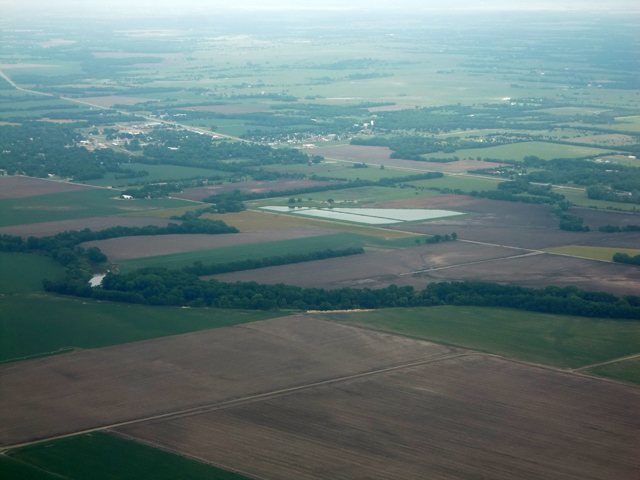 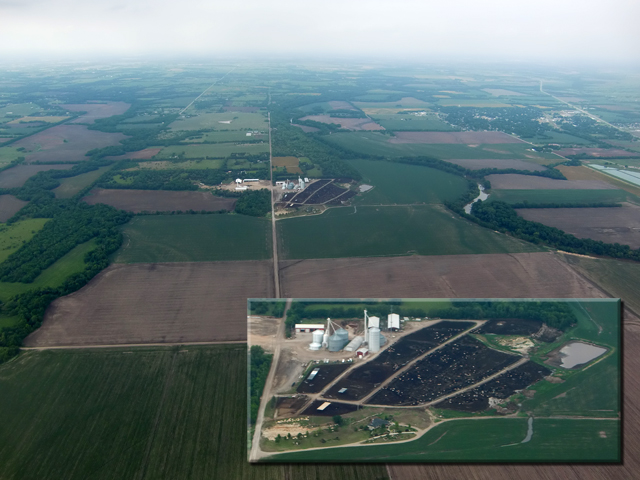 As I approached Alley Field from the Southwest I passed by this feeder business. I have seen it many times before but never took a picture of it. I am at about 1,800′ AGL. There are much bigger cattle feed businesses out west but this is a pretty good sized one for our area. 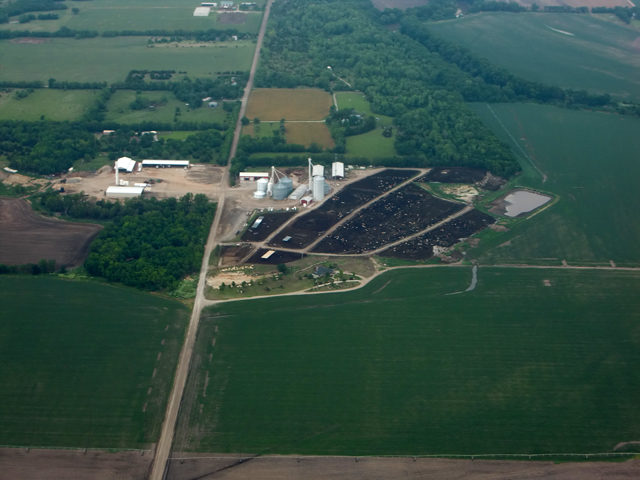 Another shot of the feed lot using the telephoto lens 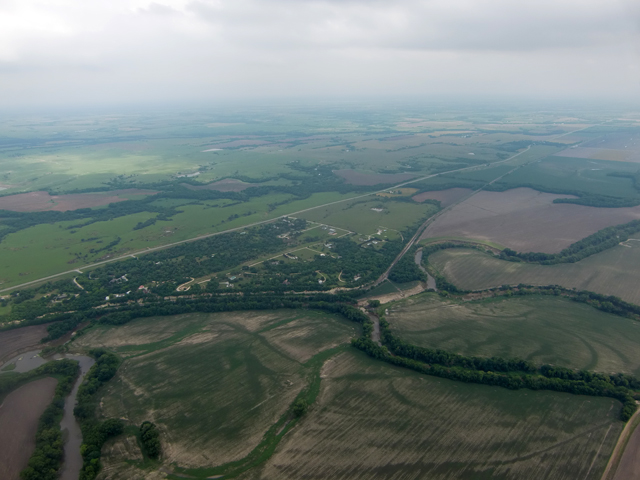 This is Pilot Pointe which is another residential airstrip community. My wife and checked it out as a possible place to move but there wasn’t anything available at the time. Also, I only saw one house with a hangar! Years ago I attended a Fly-In there that was a lot of fun. I have some video from it in my first Ultralight Movie called “A Beginner’s Guide to Ultralight Flying”. At this Fly-In I won two events: Spot landing and the Bomb Drop. 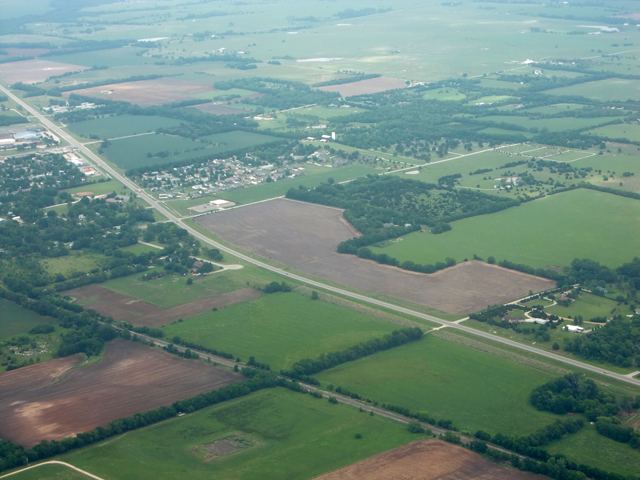 Here you see Alley Field. It is on the East side of Douglass, Kansas and is on a hill. The marker is that white, cylindrical water tower you see in the middle of the shot. 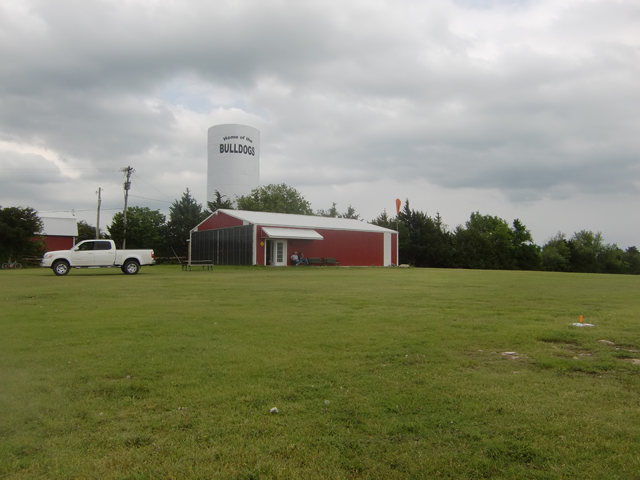 I was still sitting in my airplane when I snapped this shot. In it you can better now see the water tower and new hangar. 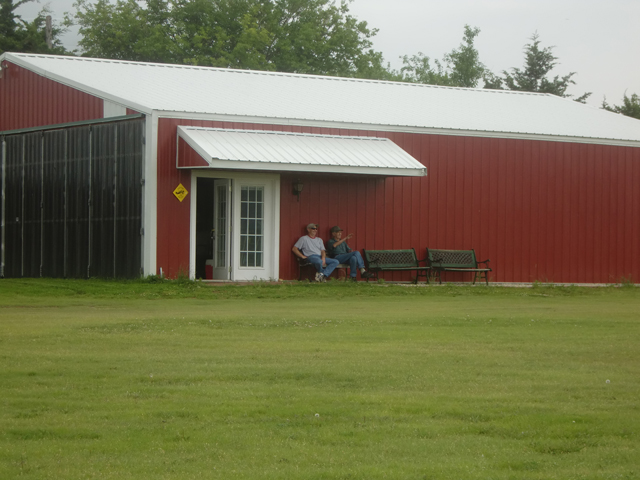 Lawrence Alley points out something to a visitor

I can’t remember this other guy’s name but he was visiting Lawrence from Udall. I told them I had just come from there. 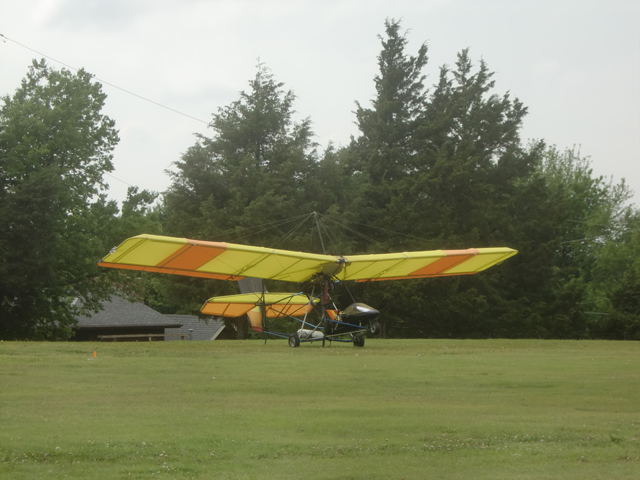 The sun peeks through the clouds

I was sitting on the bench next to the hangar listening to them talk when I saw a shaft of sunlight break through the clouds onto my airplane. I really like the way the MXL looks so I snapped a shot. 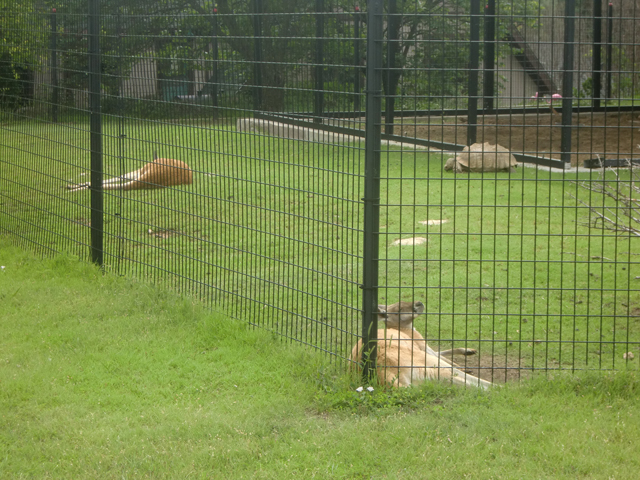 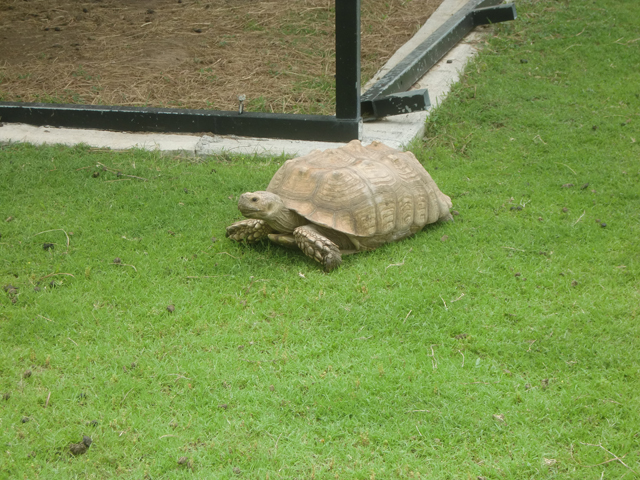 Right across the runway lives a guy named George (his last name escapes me at the moment…) and he has his own zoo. He raises kangaroos and tortoises. George produces incubator devices for wild game and sells them to zoos around the country (world?). I have been to his shop and they are very clever devices. I think they have been very useful in raising some rare animals in confinement. 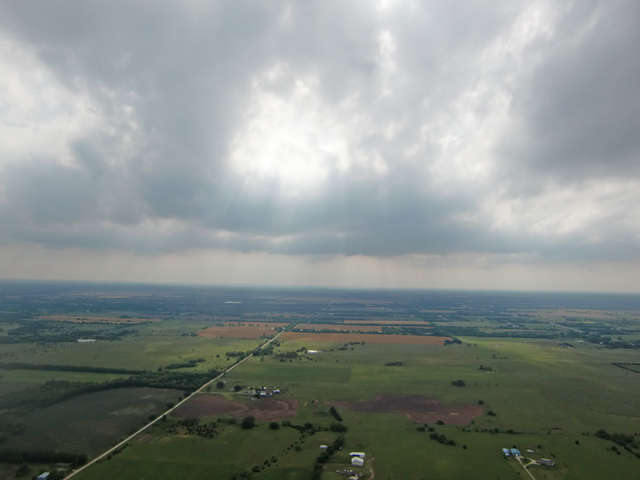 Virga to the West

I left Alley Field and headed back to my home base. There is nothing special about the shot above other than to show the humidity again. I will say that God blessed my flight with a sudden 20+mph tailwind at this point. It was smooth and right behind me. I was getting 65mph ground speed while still using my minimal power setting. Excellent! 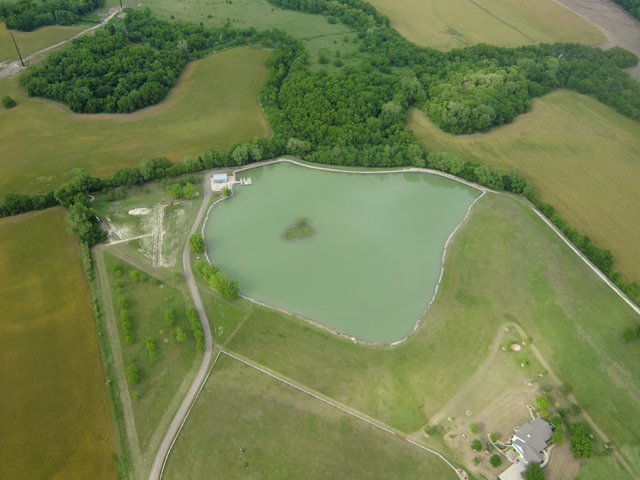 A small island in the middle of this pond

I grabbed this shot as I rocketed by on my home stretch. I have been over this area many times but had never seen the island in the pond.

Well, that was my Birthday Flight. I hope you enjoyed it because I really did!