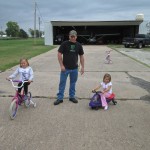 Weather Has The Final Say

My intent on Saturday the 15th of September was to fly to Cottonwood Falls, Kansas. This would be a new destination for me and the start of my exploration of the “Northeast Quadrant” of my flying area. The weather that morning prevented the journey. It was drizzling, overcast and the ceiling was low. I went to my airfield anyway to make a few adjustments to my Quicksilver but then headed back home.

Sunday still featured an overcast sky but the cloud base was higher and it was not raining. When I left Church that morning I decided I needed to take a short flight around the area. I headed out to Selby Aerodrome and rolled the plane out of the hangar. 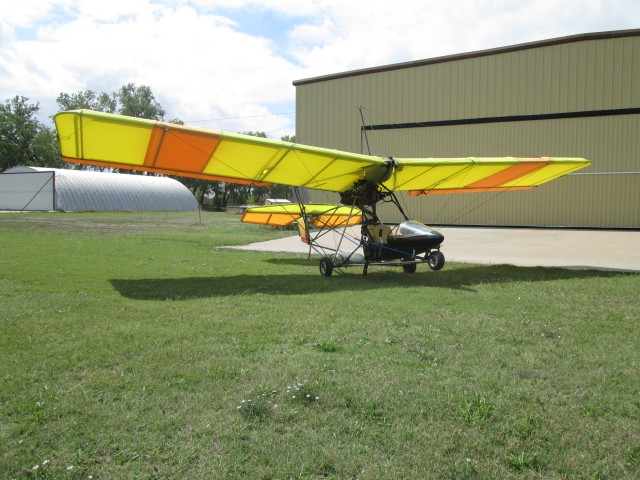 A Moment of Sunshine Brightens the Bird

The wind was light and from the South so I decided to go to the first place that entered my mind: Strother Field. I have written about Strother Field before. It is midway between Arkansas City, Kansas and Winfield, Kansas and began life as a B-29 training base in WWII. 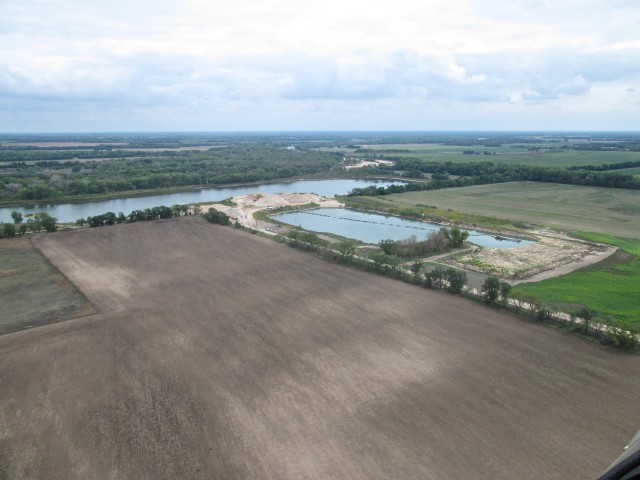 My heading to  Strother Field took me past the large sandpit shown above. It is directly East of Mulvane, Kansas. I assume the lake “above” it in the photo also had been a sandpit at one time. Now it is a recreational lake. I maintained a 500′ AGL altitude for most of my flight to Strother. The farm below caught my attention because they had two big semi-trucks parked on the grass side-by-side. It seems like about every 20th farm I pass over has some big trucks like that. I get the impression they use them for their own hauling and then, as a side business, make extra money hauling other people’s crops. It wouldn’t seem an effective use of capital to own them just for your self. 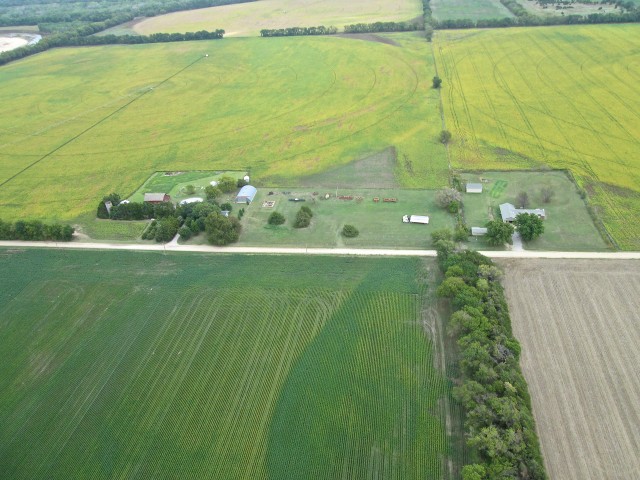 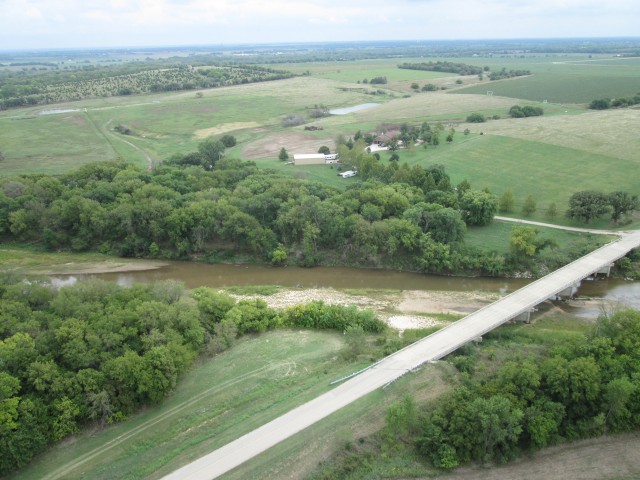 A Nice Ranch Next to the Ninnescah River

Next I saw Oxford, Kansas in the distance. My path to Strother takes me right over the top of it but I skirt it to the East. I have never had the pleasure of visiting this town but it looks like a fine community from the air. They have an airfield about 3 miles East of town I have landed at frequently. 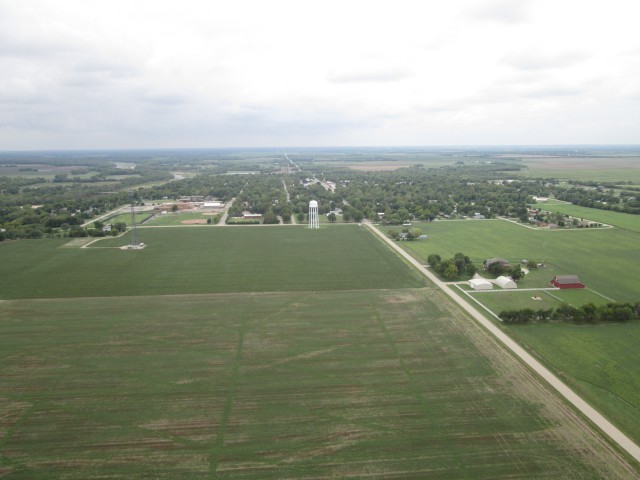 Most towns put their sports money into Football and Basketball. The Oxford school system emphasizes Track and Field. This is one of the nicest tracks I have seen in my flights out in the country. 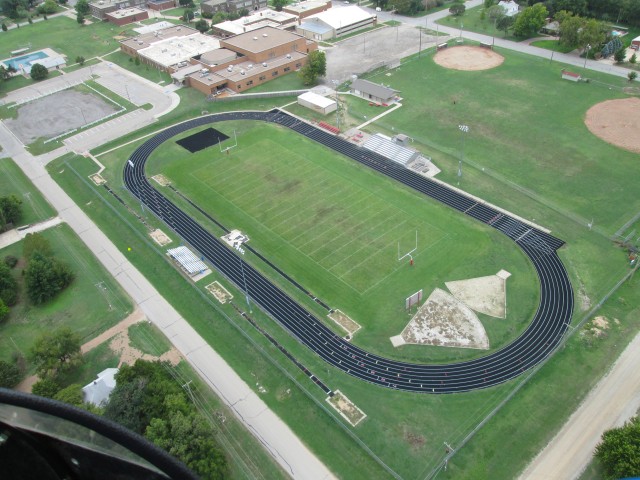 This photo doesn’t do the scene justice but I think you can tell it contains an oil field. I counted 9 working pump jacks in the area. Somebody is making some money. 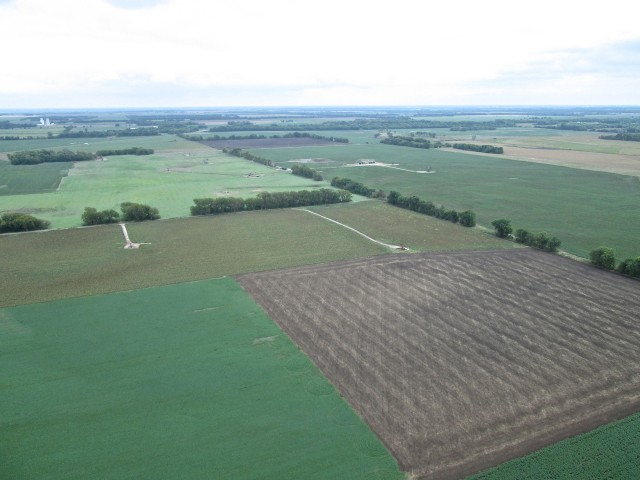 After about 40 minutes I arrived at Strother Field. There was no one in the pattern but I always make a “standard entry” at pattern altitude anyway. Because it is a left pattern I had to cross over midfield to enter the downwind leg. I saw the shot below and grabbed it before turning North for Downwind. In the distance you see Arkansas City, Kansas. Strother Field is between Ark City and Winfield. They both maintain it. 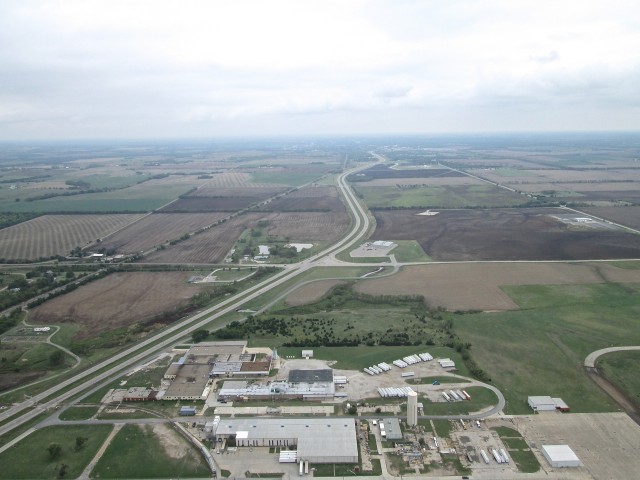 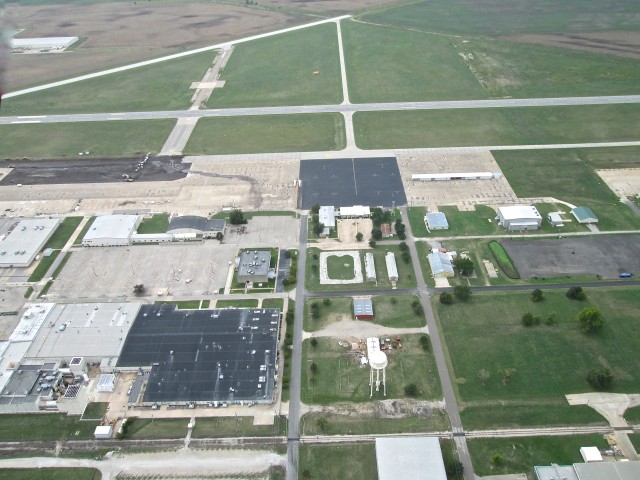 On the Downwind Leg Looking at Center Field Strother

I’m rather proud of this shot. I was set up on Final and figured I would give it a try. The air was a bit turbulent so I wasn’t sure if it would be sharp. My little pocket cam does not allow for a fast shutter speed. 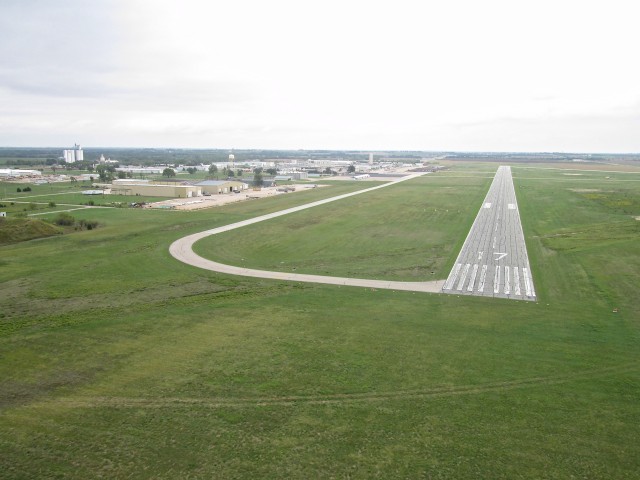 On Final for Runway 17 at Strother Field

As I pulled up I saw some action at one of the hangars. Usually on a Sunday no one is around. One of the guys waved as I approached. I shot the picture below just after pulling to a stop. I have been in this hangar on many occasions. It has been used as the “breakfast nook” for the fly-ins that are held at Strother Field. Because of that I had never seen any airplanes inside of it.

The two bikes with training wheels reminded me of a bike we had bought for our Daughter Bevin when she was young. It had the same color scheme. I can see here in my mind’s eye driving it around our cul-de-sac. Hers had white tassels on the ends of the handlebars. 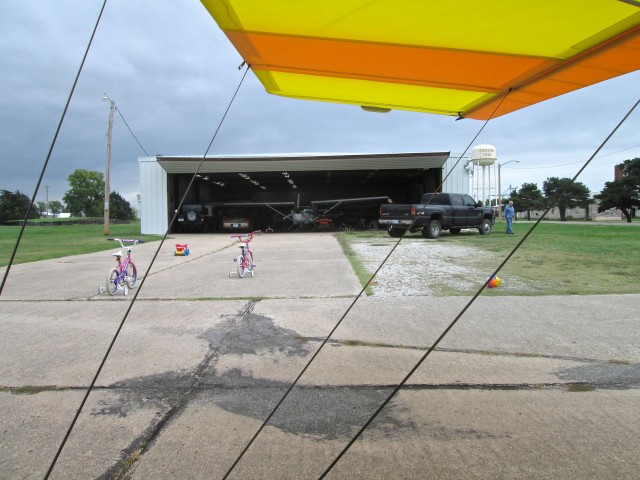 A Popular Place on a Sunday Afternoon

After getting out of my seat I was welcomed by Ashleigh McGinnis who had waved to me earlier. He shares this hangar with his Father-in-law. I spent about 20 minutes talking with Ashleigh about his business and his airplanes. This is my kind of guy. He told me he starts pretty much every day by rolling his Luscombe out of the hangar and flying the area before work. He was getting some engine work done for the Luscombe’s annual. 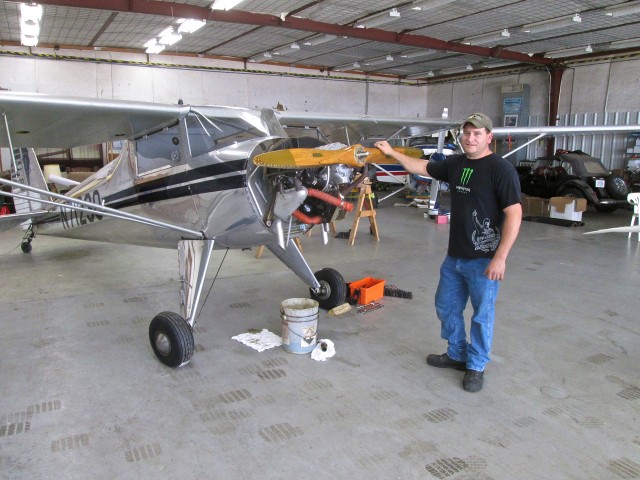 I spied some other interesting machines around the hangar. Ashleigh showed them to me. The bike below is a Ridley. It features an automatic transmission. I had never heard of them before. Ridley’s go way back, though. You can read about them here. 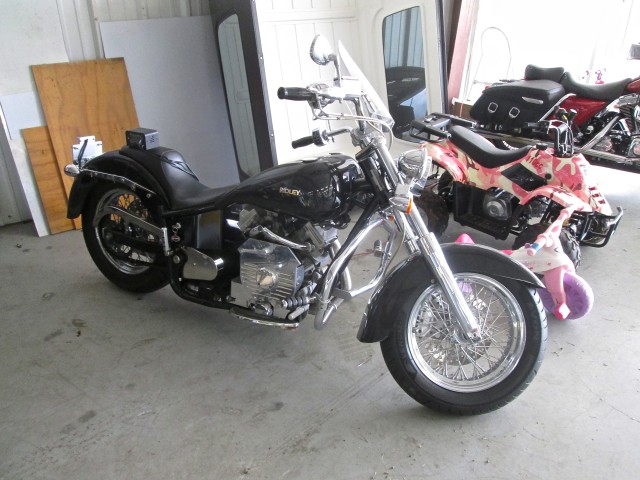 He also has the Indian shown below. The sweep of the front fender is a nice touch. 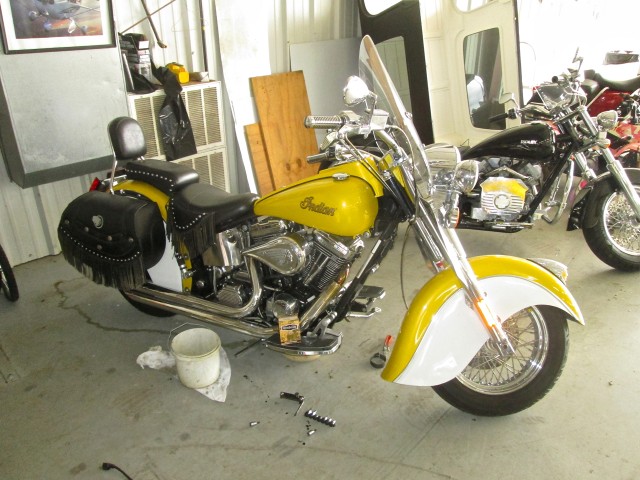 A Dressed Out Indian

Right before leaving I took the shot below of the three. The scene brought memories of my two children playing around me while I was working. It was a great time in my life. 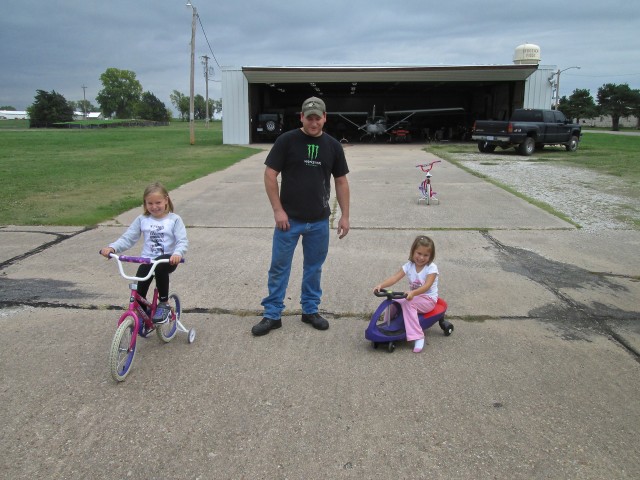 My egress from the field was not in the heroic tradition. It took me a while to get my motor started. After a while I was gasping for air having pulled the motor through innumerable times. I think it was flooded. I need to reset the carburetor for the cooler weather. I finally got it to start and it settled down into a nice idle quickly. On takeoff I demonstrated to Ashleigh the short field capability of this Ultralight. The MXL doesn’t fly very fast but with its big wing it gets off the ground in an amazingly short distance. As I was struggling to get the Rotax motor to fire, Mrs. McGinnis showed up. You can see the 4 of them waving below as I pass over the tiedown area in front of their hangar. They are just to the left of the tower. 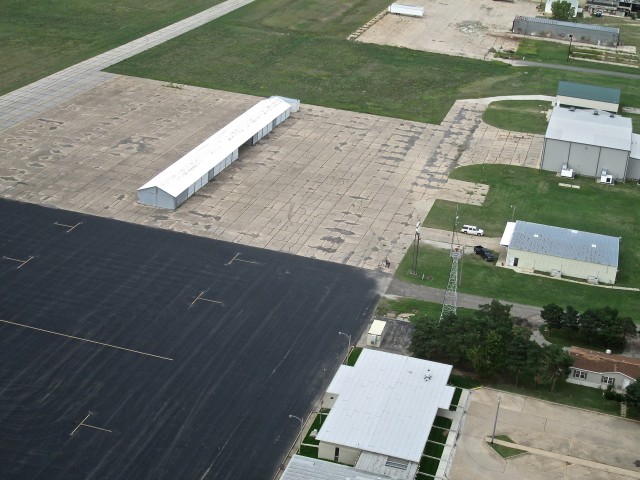 It was the last day of the Winfield Bluegrass Festival – properly known as The Walnut Valley Festival. I had attended it a few years ago and was very glad to have gone. Among many noteworthy performers, I saw Tommy Emanuel play and was so impressed I have since bought about 4 of his albums. I will go again when I can.

On the way home I cut over to the Winfield Fairgrounds to take a few pictures. I keep thinking I need to ask someone around there if I can land my plane and walk over to The Festival. There are a couple of fields close by that would be easy for me to do this. The field in the foreground of the photo below would be perfect. I just need to do some “detective work” to see if I can make this happen. Next year.

Keep in mind that pretty much everyone has left by the time I took these shots. During the festival it is packed with tents, campers, 5th Wheels and Motorhomes. 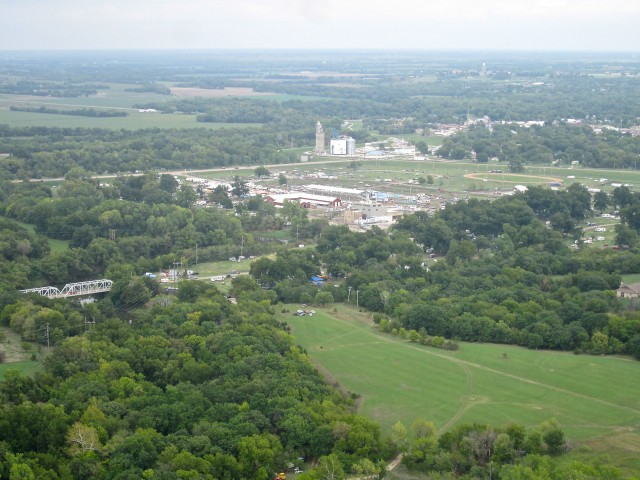 The Winfield Fairgrounds from about 500′ AGL Looking Northeast 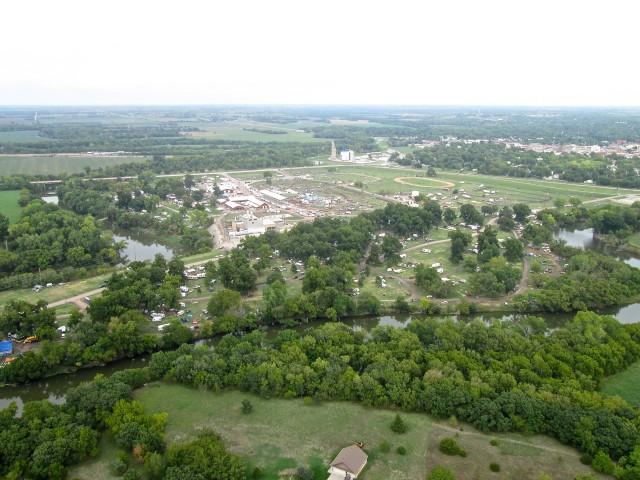 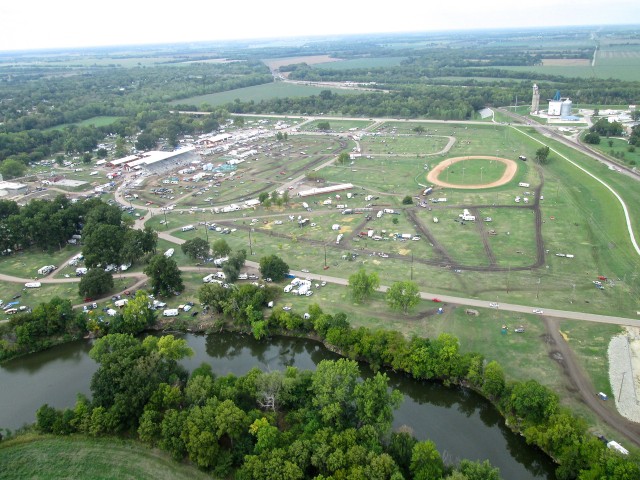 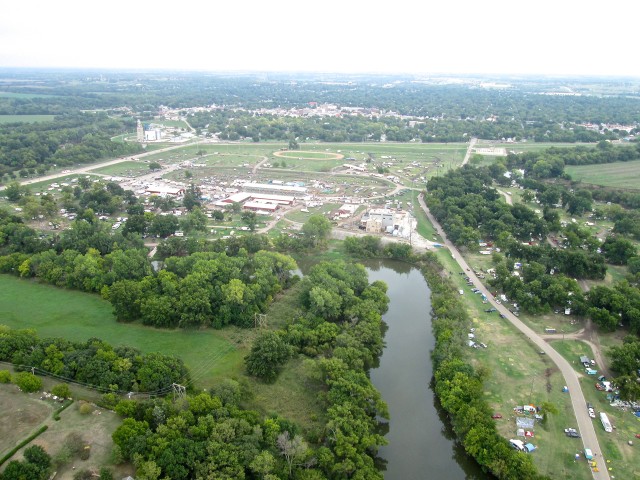 After leaving the Winfield vicinity I made a bead for Selby Airpark. On the way I saw this farm with all the red roofed barns and buildings. 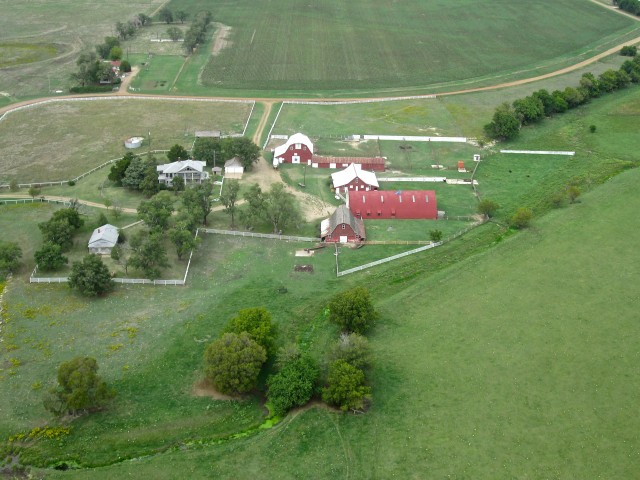 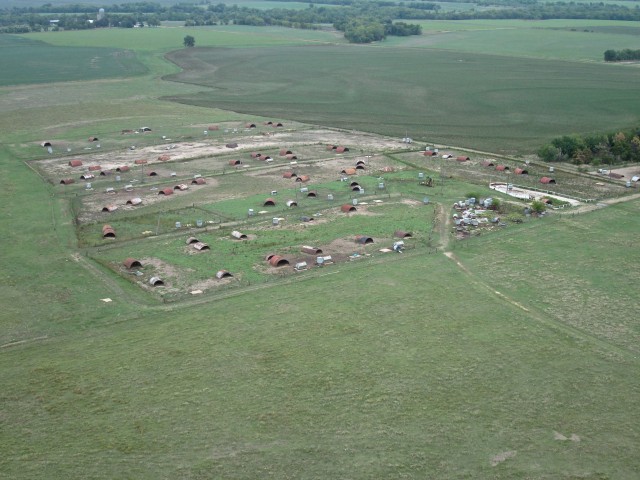 Udall, Kansas was on my path. Cherokee Strip is just South of Udall and I stop there frequently. Today, though, I was going to keep heading past it when some welding sparks caught my eye. If you look carefully to the right of the new water tower you can see a tower with a crane next to it. I circled the edge of town to see what they were doing. 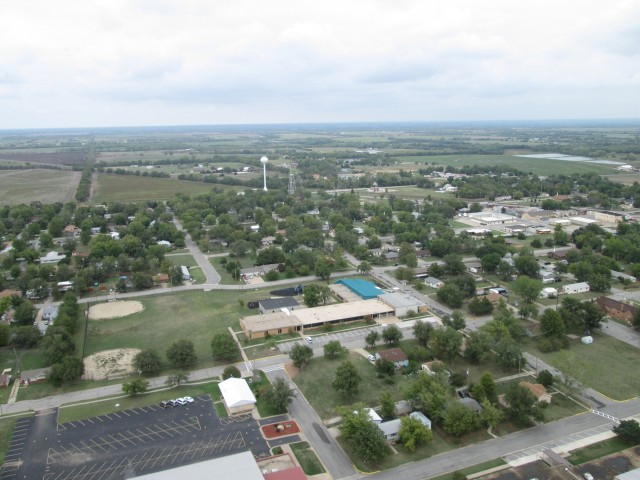 As I approached, I could see the sparks were emanating from the top of the legacy water tower. They were cutting it up with torches. I had hoped I would grab some of the spark trails in a shot but it didn’t happen. 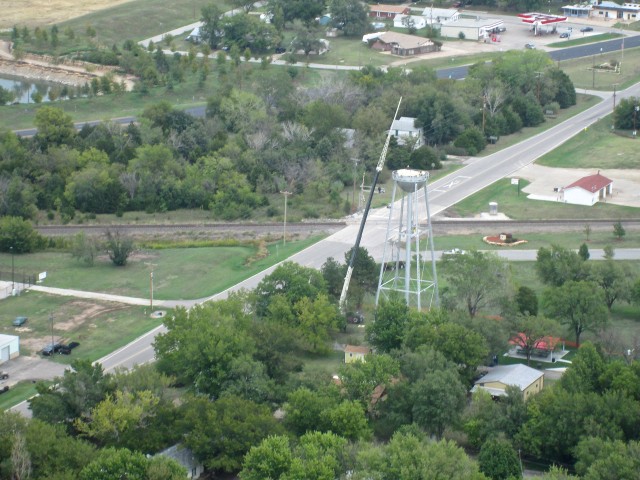 A Crew Dismantling the Old Water Tower with Cutting Torches

I got a little closer to take the shot below but the air was pretty turbulent. There is a little “smear” in the image. I left the picture in this report so you could see the crane and metal on the ground, though. 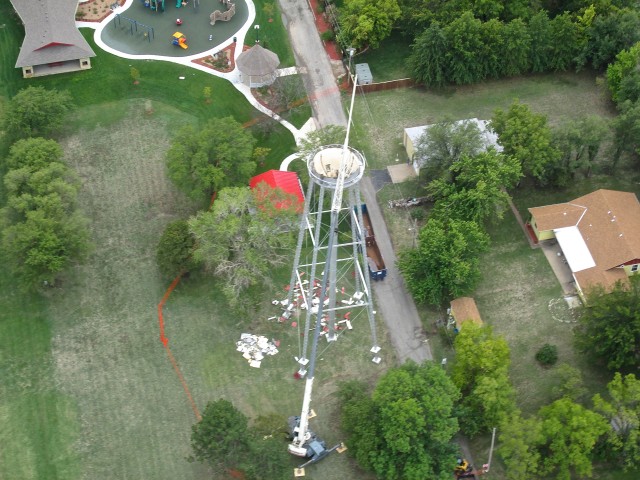 After turning North away from the water towers, I headed for home. I took this last picture because the green of the algae was so pronounced. I haven’t seen a pond overtaken to that extent that since I can remember. 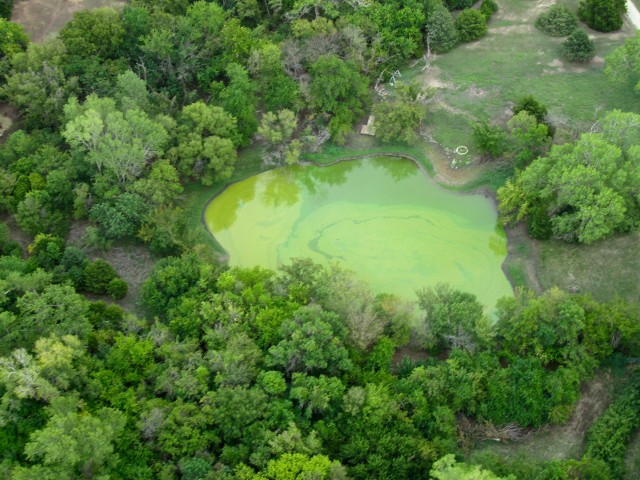 It was nice to get up in the air for an hour and a half and to meet Ashleigh McGinnis and his family. Tomorrow is the 6th Annual Ultralight Fly-In at Doug and Sabrina Moler’s Hangar at High Point, Kansas. You can expect a report from that event.