In Kansas, it gets cold in the winter. Now, I’m not talking Minnesota Cold or Alaska Cold, but it does get into the freezing range. And, that thing called “wind chill” really takes on meaning when you are out in a 40 to 60 mph wind blast while flying an ultralight in the winter. At first, back in the 80’s, it just meant short flights interspersed with warm-ups around the pot belly stove at The Gliderport. I would use the “layering” method of keeping warm which works for about 5 minutes until the wind works it’s way through the three layers. After that I would be freezing. I could tolerate it to some degree but I found that the thumb of my right hand (the “stick hand” on a Quicksilver) would start going numb pretty fast. Before long it would lose feeling. This would require me to land. Eventually, around 2005 or so, I came to the conclusion that if I could find a jumpsuit that was wind-proof things would be better. I went into research mode and, sure enough, there are such things. I bought one and it works great. It is absolutely fine. If the OAT is freezing or below, I don’t stay up for hours on end but it makes the proposition of a 45 minute to an hour flight much more tolerable. Even with that improvement, though, I still had trouble with the right thumb. I tried different types of ski gloves and mittens to no avail. I even fashioned some “elephant hands” (look on the motorcycle websites to find what they are…) but decided I didn’t want to risk getting my hands tied up in the controls and decided not to use them.

So, after flying ultralights about 25 years I finally figured out a way to keep my hands warm in the winter. It only took me about 20 years to get a decent, wind-resistant jumpsuit so I guess another 5 years to complete the ensemble is my par.

Now it’s not like this is rocket science or anything but about two weeks ago I seized on the idea of trying out battery-powered, heated gloves. Even though the concept is not new, the ones I found are fairly advanced. They use lithium batteries and have three settings controlled by a button at the base of each thumb. Tiny LEDs indicate what heat setting you are on. They arrived a couple of days ago and today, being a Saturday, I decided to test fly them. It wasn’t super cold – about 47 degrees – but cold enough I was able to ascertain their effectiveness.

I figured a good test run would be to drop in on Captain Doug Moler of High Point Estates – a Flying Community now part of Valley Center, Kansas. I knew he would be there because I talked to him on the phone earlier in the day and he said he would be working on his new walking path. It will be made of natural stone and will link his house and hangar.

(NOTE: Although it will be obvious when I say it, I must make mention that the reason there are no aerial photos in this minor missive is because I can’t work the camera when I am wearing electric gloves… or any gloves for that matter…) 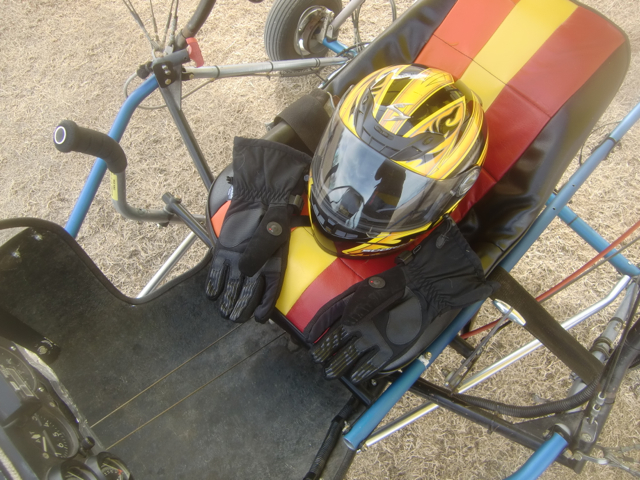 This is supposed to be a Product Shot but I should have been closer. If you look closely, though, you will be able to see the red LEDs glowing on each glove.

After an uneventful half hour flight… 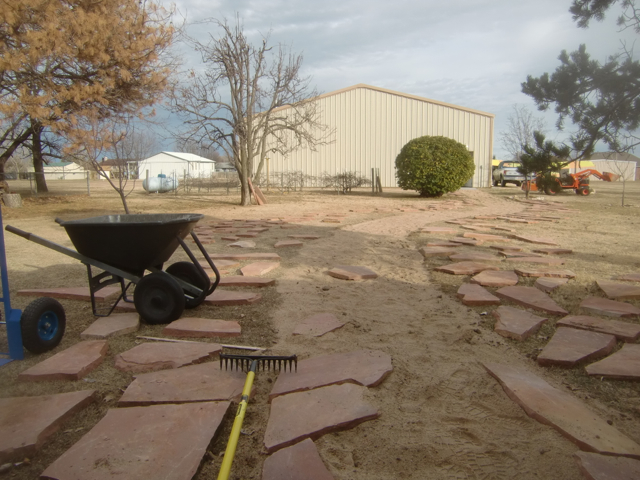 Here is the scene at Moler's looking from the back of the house toward the hangar. You can see the yellow of my MXL wings to the right of the hangar behind the small tree. Doug's walk is in it's post conceptual stage. The surveying is completed. The sand is down. But, only a few stones have been set thus far.

Here is the other angle. From this shot we learn that Doug's son Randy (who came into town hoping to fly the Cessna with Doug) had been dragooned into serving as master mason for the project. Pharaoh Doug stands in the foreground making big plans as Slave Randy ruins his hands breaking rocks in the service of this mighty endeavor. At this point, Randy was being forced to use a "chisel" with the dimensions of a No#2 pencil. Skinned knuckles... Smashed fingers... It was pretty tough going...

Before I might be pressed into service, I made my escape. 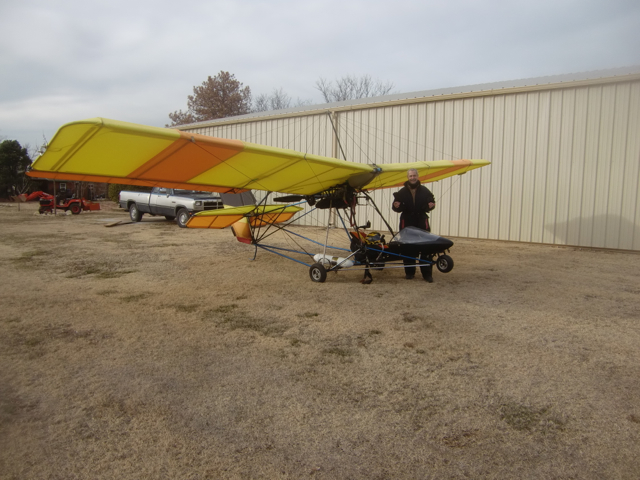 Having completed my "electric hands" test flight, I decided to leave the area. Since Doug had things under control and his presence wasn't required at the work site, I asked if he would take a picture of me next to my ride. As we say in the TV business, "If there aren't any pictures, it never happened". So, now you know that it did. (Again, I have orchestrated a rather weak "Product Shot". You will just have to trust me that I am holding the new heated gloves in my hands)

The heated gloves were a success and are now part of my cold weather flying ensemble. My right thumb is is now warm and functioning.

My first Joyride of 2012 complete with Electric Hands!