This was another one of those days that most guys don’t seem to like to fly in. I had a gusty 20 mph wind out of the south and it was pretty hot. PERFECT!

I decided to fly directly into the wind so that the first leg of my flight would be the slowest and thus allow a tailwind return. As it turned out I didn’t come directly back from Udall so I didn’t get a direct payoff on the return to Selby Aerodrome but it’s not like I am transporting freight or anything. The idea is to FLY. Going places is just an added benefit of Fun Flying.

As I started my adventure I was showing about 19 mph ground speed on my GPS. My lightning fast mind calculated that in regard to my airspeed as a 25 mph headwind. Since the spring I have been watching these guys build this big powerline so I took some pictures. 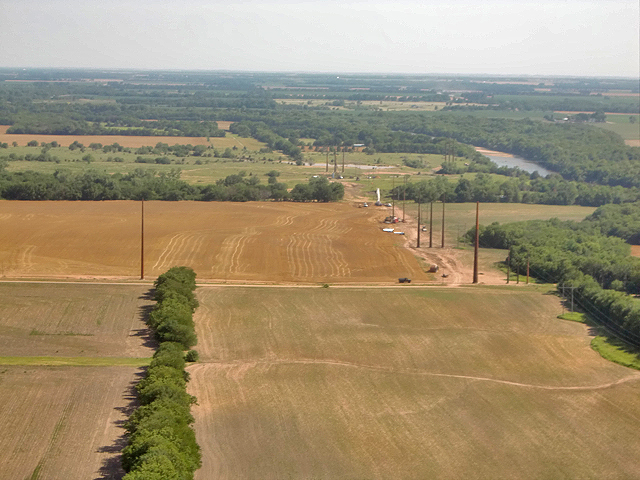 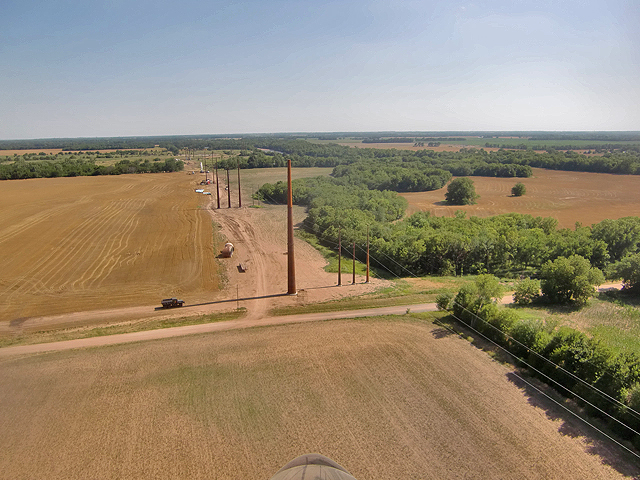 Getting a little closer. You can see a bit of my airplane's nose in the shot.

As a cameraman and photographer it is a big deal to me to have a level horizon. But, try as I might the turbulence was preventing me from getting perfectly level shots. That notwithstanding you can see the size of these steel poles by referencing the trucks and cranes around them. It looks to me like the new plan for these high tension lines is to use flexible poles that sway rather than the older style Eiffel Tower gantry type towers you mostly see.

I flew on and arrived at Cherokee Strip on the outskirts of Udall, Kansas. It was so windy I pulled right up to Tommy Randall’s shop. Tommy has Ranco Custom Products and this is his shop. Usually I park about 30 yards to the West but today I thought if I did that I would find my plane in the next field when I came back out. 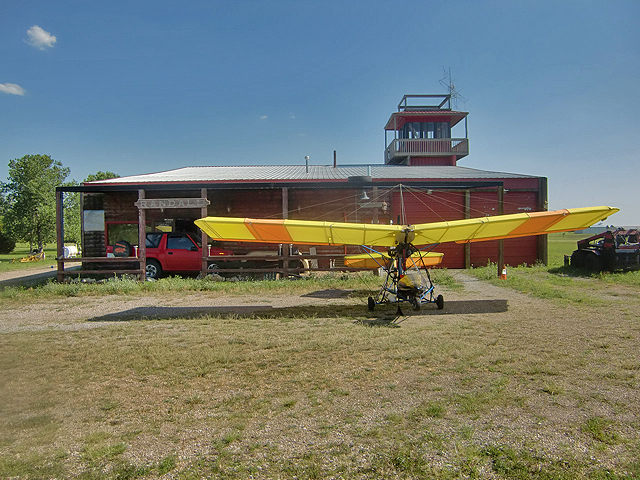 The office door was open so I walked in. I called out but nobody answered. I like the way Tommy’s office looks so I snapped off a couple of shots. 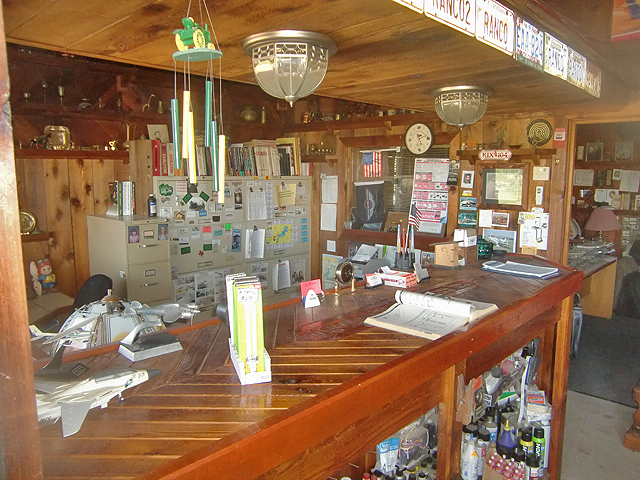 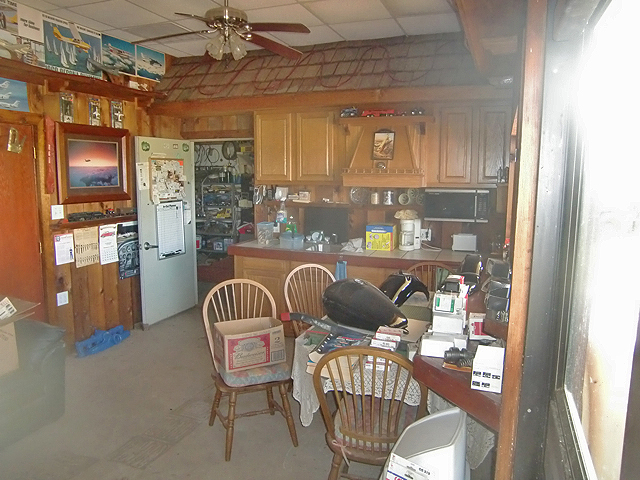 A kitchen area with lots of airplane pix

Since I knew Tommy would not leave the place open if he was not here I decided to walk into the shop. Then it became obvious why nobody heard my plane land. Tommy and his friend Maggie were working on her tractor tire right next to a giant floor fan. The noise of the fan kept them from hearing my engine. In fact, I walked up right next to them before they even knew I was there. 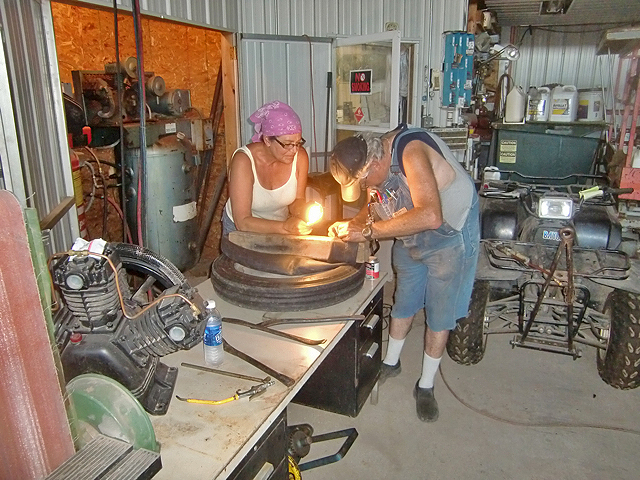 We talked for a bit and I showed them the shots I had taken of the power line project. Maggie was very intrigued by this and mentioned that she had paid a guy a while back to do aerials of her farm but the pix didn’t turn out the way she wanted or they were too expensive or something. I told her I could snap off a few and they gave me directions. 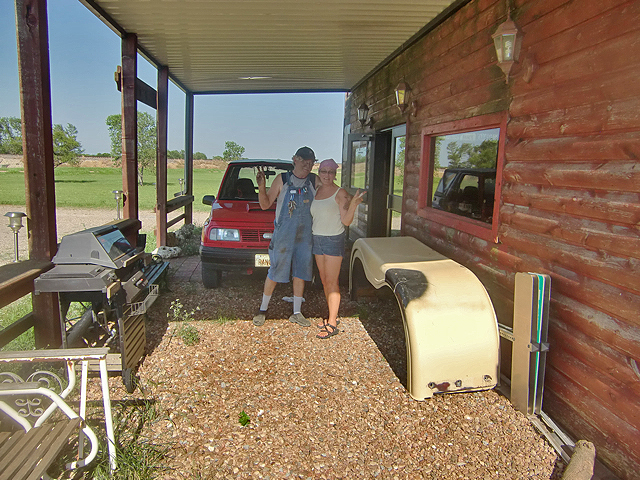 Tommy and Maggie in front of the shop

I told them it was time for me to head out and in order to document the event grabbed this shot out in front of the shop. Maggie was not thrilled with all of this picture taking because she was in “manual labor” mode but I think she looks fine. 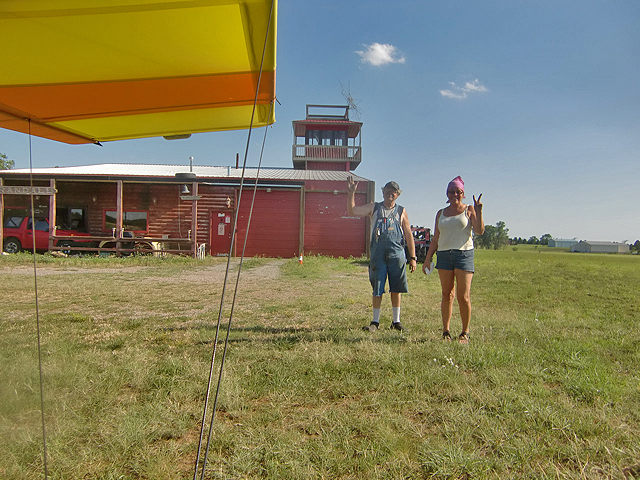 Regardless of the location I would have tried anyhow but when I heard where the farm was I was relieved. My last trip up to Cherokee the guys did their best to tell me how to find _____’s house and strip and I never did see it. Maggie’s house was easy to find when they told me it was on the NorthWest corner of where the Ninescah River crosses K-15. That is the kind of thing I can find.

I did the best I could but the air was so turbulent it was like shooting from the back of a bucking bronco. Quite a challenge but then I enjoy challenges of this sort. 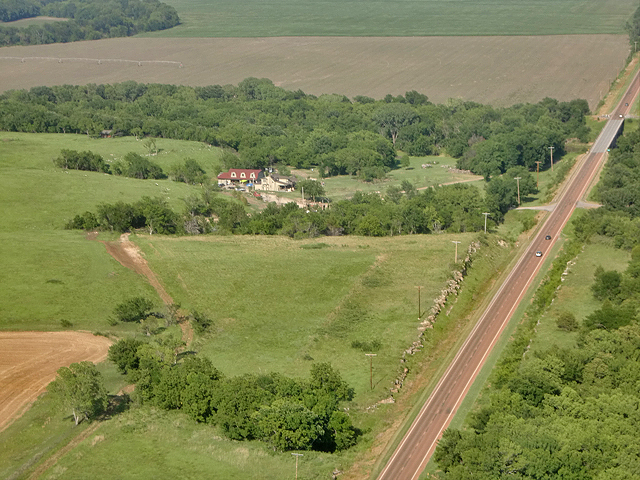 From about 300' looking East 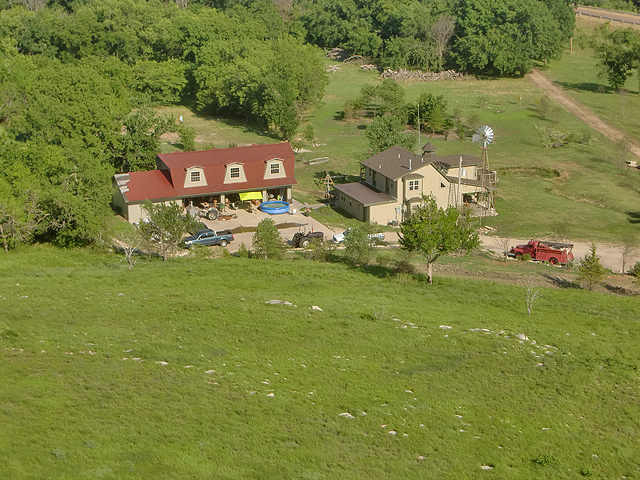 About 75' into the wind looking East 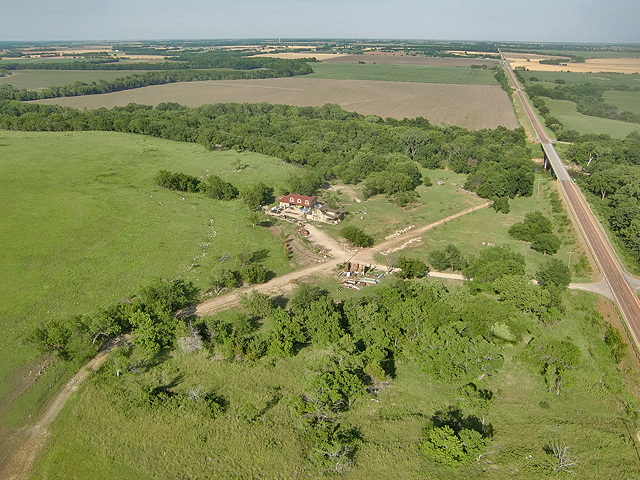 I snapped off about 20 shots and then left the area. I decided rather than going back to my home field to head over to Alley Field next to Douglass, Kansas. The air was ragged and I made a pass down the field (which is down hill). I didn’t see anyone around so I pulled up and left the area. Suddenly I thought, “Check out Chuck’s Place at Butler County Airpark” and that’s what I did. Butler is just a few miles North West of Douglass. Chuck Gantzer has been building a huge Hangar/House on the field. I have written about it in earlier posts on this Flight Blog. 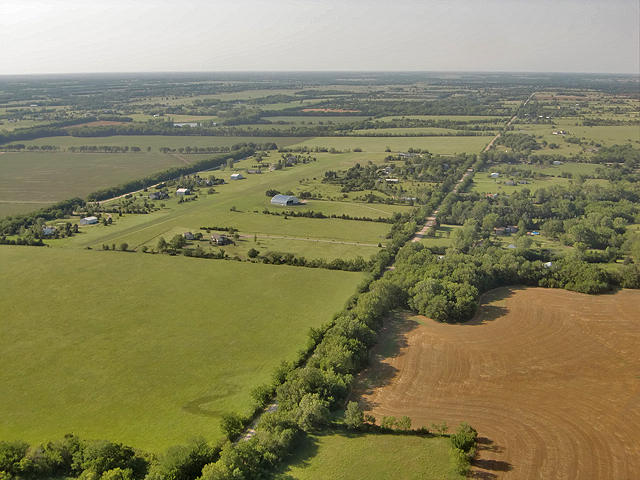 Center screen you can see Chuck's place with the airfield to the left. This was shot from 600' looking NNW. 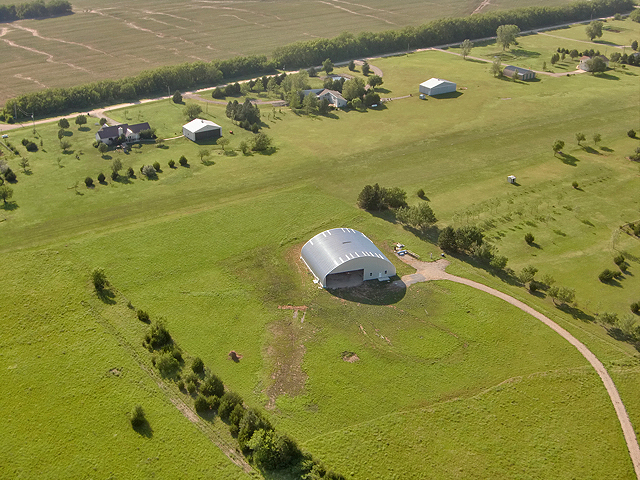 I checked around the pattern and no one was there so I grabbed this shot from about 200'. 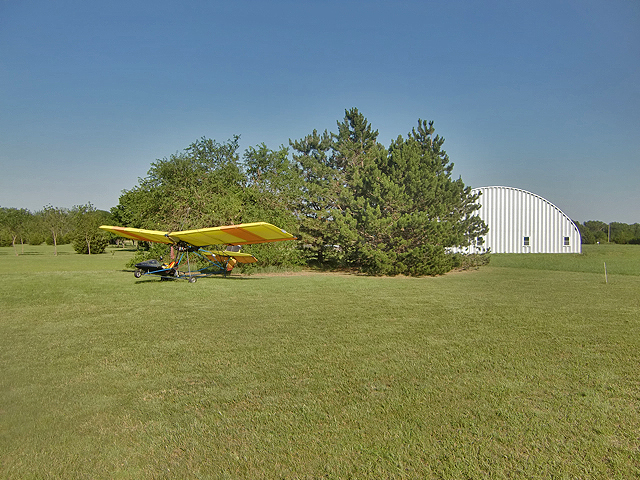 Not to belabor the point but it was windy enough that I tied my steed down behind the trees so it wouldn't wander off. 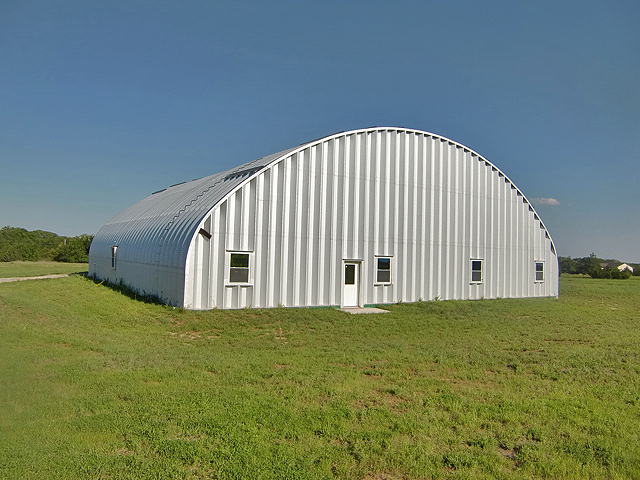 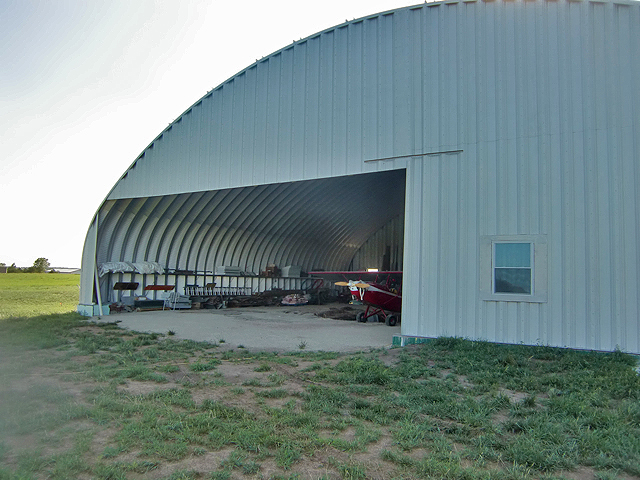 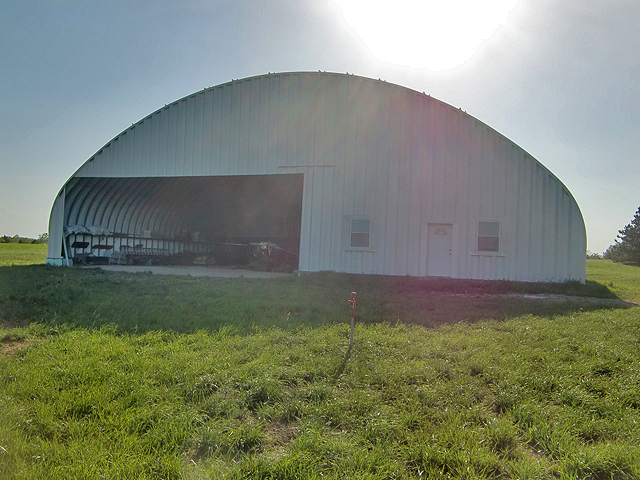 Shooting West showing the hangar entrance and where the living partition will be. 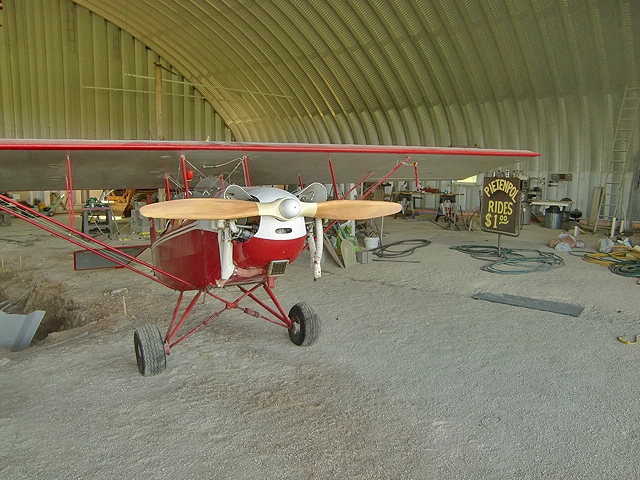 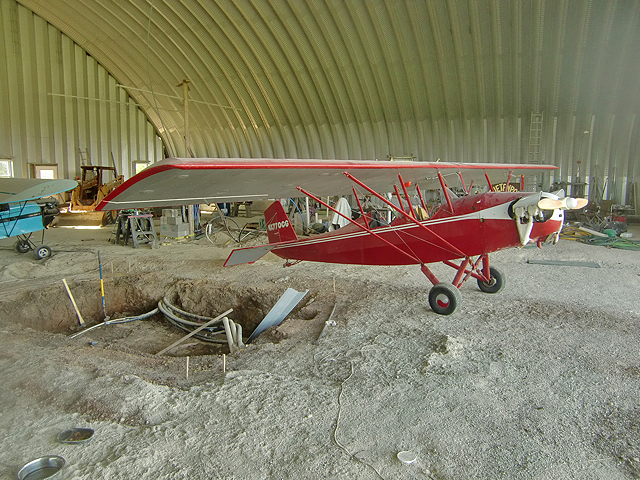 The plane and the water tank.

Chuck is making this place to be “off the grid” and is utilizing various technology to do that. He will be employing this water tank as a heat sink in conjunction with solar collectors for heating and cooling the structure. 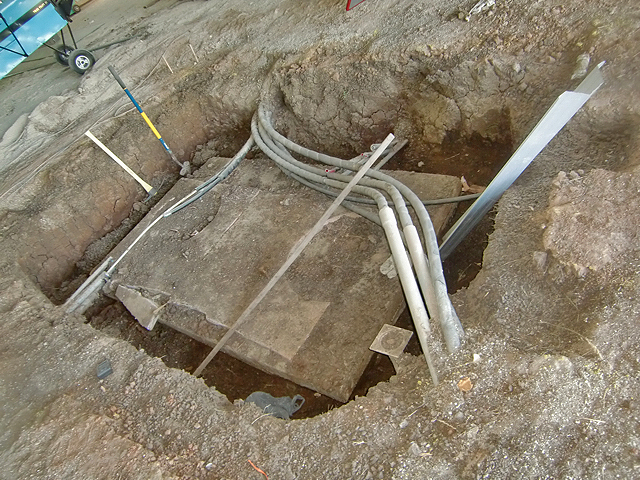 The water tank is partially complete. 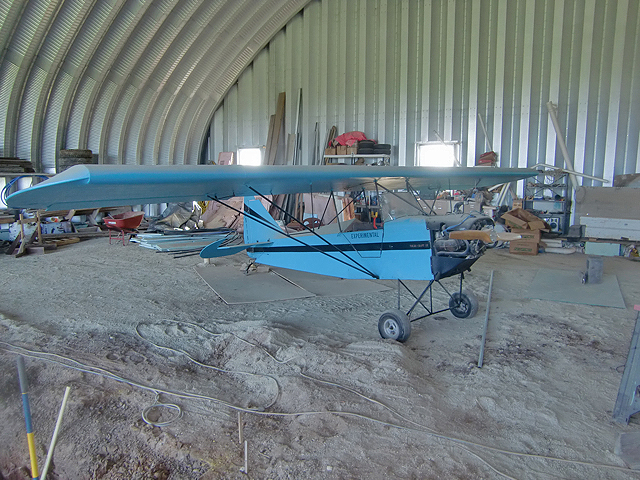 Some type of Volksplane. I don't know if it is Chuck's or not.

Since Chuck wasn’t around I left my card and headed out. I figured my next stop would be Cook Airfield. 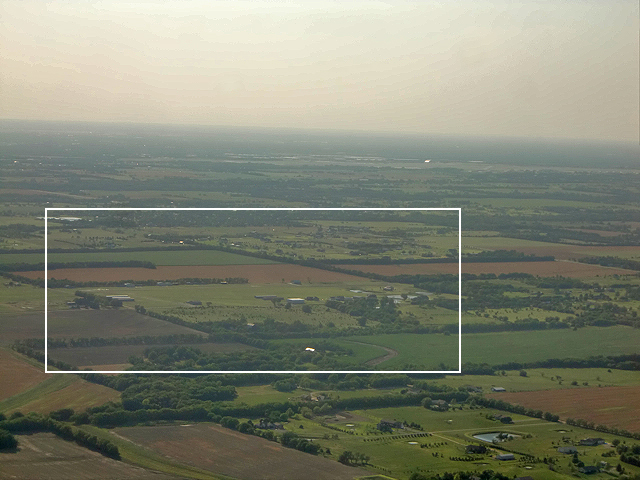 Cook Field is in the box.

As I approached Cook I decided to try some shots. The sun was in my face and my little pocket cam’s screen was completely useless. So I did about three “blind” shots and decided this one was tolerable just to put in the story. I made a pass at the grass field at Cook but saw no one around and headed toward Selby Aerodrome. 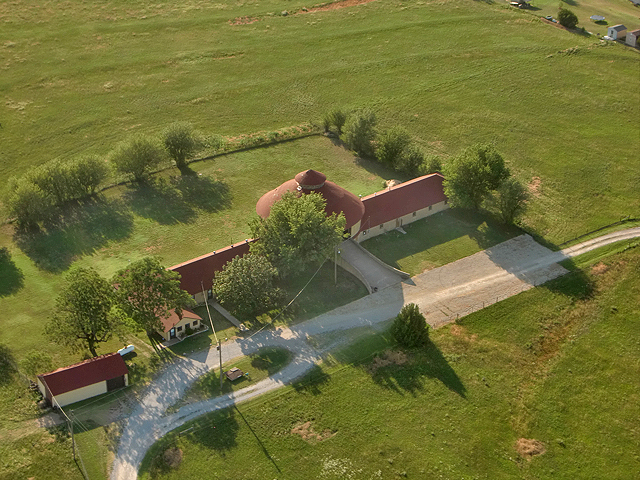 The antique milk house on the South side of Derby, Kansas.

I always like to look at the Old Milk House. It is in the corridor I fly through south of Derby. The better angle is from the West but I was getting low on fuel and decided to head back and land. 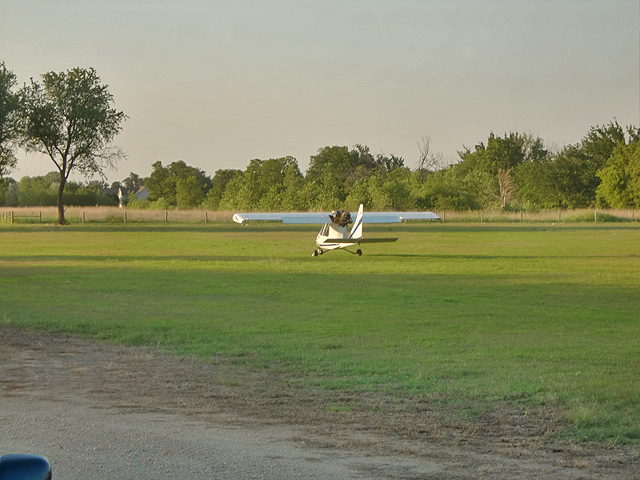 When I got back in the hangar, Don Forse showed up. We hung out for a while and then he pulled his Titan Tornado out and headed to Wellington, Kansas to get some gas. 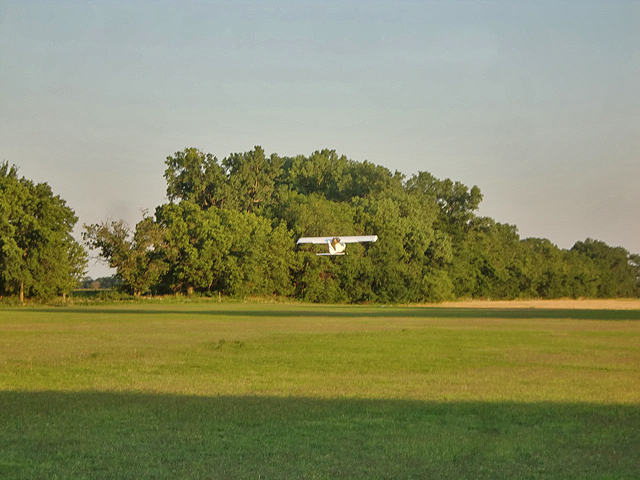 Forse climbs to the South.

All in all it was a great flight. I particularly like flying in the Summer when I can wear a t-shirt and shorts out in the warm breeze.

The EAA Fly-In is coming up the weekend of 4th of July. I will head up there and report on it.