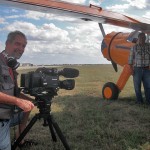 Yesterday I drove up to Great Bend, Kansas to meet with Bill Koelling to talk to him about his ’38 Cessna Airmaster. It was a very windy day. We almost had to cancel because of this on account of the difficulty of miking his voice. But, after I did some testing with the placement of the wireless mike on Bill, I was able to get consistent recording without wind noise and we did the interview. Still, it was mighty hot and windy out there…

Bill pulls some rotations before starting the Warner Radial

Bill’s plane is hangared out at Great Bend’s historic airfield. During WWII it served as a training base for B-29 pilots and crews. Here is a link to the airfield’s official website.

We set up on the grass next to the concrete runway. Later Bill would use this long strip to take off and land. Like a lot of older taildraggers, the Airmaster is more pleasant to land on grass.

The interior of the C-145 is clean and workman-like. Many of the instruments are original. During the interview Bill showed his upholstery color matching method which is very interesting.

Bill at the empennage

Above you can see the famous Cessna logo of olden times.

The control method for the tailwheel is unlike any I had seen before. It made for interesting ground handling.

While they are more amenable for tailwheel operations, grass fields sometimes conceal the hidden surprise of gopher and/or prairie dog holes. While they wouldn’t damage the gear they can make for a rough takeoff or landing. They can also trap your tailwheel during taxi. Mostly what I saw while we were shooting was the web evidence of some type of underground spider peculiar to that area of Kansas. I saw quite a few of those holes but they are only 1.5″ wide – Thank God!

Brian takes a break for a promo shot w/ Bill

I put the two shots above in here so you could see why I am glad there were only small spiders living in the ground on this field and no 4″ to 6″ tarantulas like I saw when shooting down in Texas. I do not relish the idea of one of them strolling across my leg while I am in deep concentration.

Airmaster at take off

With the wind we had (20-25mph) I was impressed at how quickly the Airmaster took to the air.

Just talking with Bill for a couple hours convinced me Cessna should hire him as their historian. He is an absolute master of the history of this airplane and of early Cessna History in general. We will be incorporating many of these interesting facts in the movie.