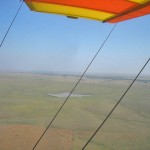 Chris Duncan, who went along with me on this journey, has also penned an entry of this memorable day. So, this will be my version of the events. (If you want to get the facts, check his account. My stuff is all dreamland…)

Whenever I fly out to the Famous Beaumont Airfield & Restaurant, I pretty much always leave at sunrise. This day started as no exception. Bill Bailey (seen below) almost flew with us but at the last moment realized he needed to go to Benton Airport instead to meet up with Terry Alley. So, it was a flight of two. Sort of…

Shot from my cockpit back past the MXL empennage. Bailey bids us adieu.

Chris has decided his best economy airspeed is about 10mph faster than what I fly for economy. Therefore today he decided to take off about 6 minutes after I took off. Basically that meant I didn’t seem him again until I landed at Beaumont.

What follows are a few representative shots of what it is like to fly directly into the rising sun for 38 minutes. It’s not horrible but it is something you must adapt to when getting up this early for Beaumont. The way you find the field is to fly directly into the sun. No need for a map, compass or GPS. Just put the fiery bead right in your path.

The sun breaks ground. This is at 800' AGL just east of Derby, Kansas - obviously pointing east

Fog was unusually thick this morning east of the Wichita metro area. I had to get a picture of the first train of the day.

This shot also reminded me of something I will elaborate later. The clue is the crab angle to the sun….

The thing that was exceptional for this flight was that, unbeknownst to the “weather forecasters”, it was readily apparent shortly after takeoff that we had a favorable tailwind in the order of 25 mph. When you fly a plane like mine that cruises at only 44 mph a 25 mph tailwind is a 50% boost to your groundspeed. Not a small thing. There are potential repercussions if you intend to go back later in the same direction but I wasn’t worried. The reason was that the wind picked up dramatically at 900 – 1,100 ft AGL. Down around 3oo to 600 ft it was only about 10mph. So, I planned to fly our “into the wind” phase later in the morning at those lower flight levels. As it turned out the weather cooperated and we ended the day with what I call a 15 mph positive gain. This is the sort of thing we live for…

Just outside of Beaumont are 100 Windmills off my starboard wing

Through those little strings that hold my wing on you can see the field of propellers they tell us are the future of power generation. I’m not convinced but since this is a “flight blog” not a “complain about politics blog”,  I won’t get into all that. Beaumont Field is 180º opposite this angle. There was no other traffic in the air, no planes on the ground, so I eased into the pattern and put it down.

"Ramp Dog" comes out to see if I need fuel

As soon as I pulled into my parking spot a dog approached. Although this boy has a fierce look in the photo, he and his smaller buddy (not shown) were a couple of happy Chamber of Commerce greeters welcoming me to the field. I killed the engine and they were right up next to me demanding attention. I love the canines.

I liked the way the rising sun was playing off the wings of my plane so I shot it next to the Beaumont Hotel Sign.

I was just getting my earplugs out when I heard the familiar whine of a two-stroke motor spinning a two-blade prop. It was Chris taxiing his Max from the runway toward the Hotel/Restaurant parking lot.

Duncan lines the Max up next to my Quicksilver

The shot above was more for documentary purposes than artistic but by chance it also features the Beaumont Mountain just behind Chris’ aircraft.

Seeing this shot I realize I have too many pictures of the pilots and planes in my blog. I must not miss the opportunity next time at Beaumont to get a shot of the waitresses and the interior of this cafe. They do a great job and make some good grub.

POV of the taxi strip out to the active

Another documentary shot lacking in any redeeming artistic value. It puts you on the taxiway, though.

Once we got airborne Chris went into high speed mode and blasted past me. Perhaps you can see him in the distance off my wing. One good thing about Chris is that you never have to worry about him bumping into you. He’s not into that “formation flying thing”.

A graveyard graces the Flint Hills

Every time I fly this trip I see different things. I was taken by this lone Christian Graveyard all by itself in the beauty of the Kansas Flint Hills. No better place to be put to rest.

Here is another new sight I saw on this path I have taken numerous times before. The picture doesn’t do it justice but if you look above the tree line above the brilliant green field in the center of the shot you will see an interesting paramecium shaped mound. I had never seen it before. It is directly east of Alley Field of Douglas, Kansas. I flew right over it to try to discern if human intervention was involved in forming its shape but it looks to be natural.

We landed at Alley Field. I’ve shown pictures of the field elsewhere in this Flight Blog so I didn’t shoot any this time but this Chevy is a new arrival. I’m pretty sure Lawrence said it was a 1953 model. It is in VERY good shape and looks to be original. He is storing it in the hangar for one of his sons I think.

At Alley Field we thought we might rendezvous with the guys who went to Benton earlier this morning but after hanging around for about a half hour it looked like they weren’t coming any time soon. I checked my fuel and asked Chris if he wanted to wing over to Udall’s Cherokee Strip with me. He said he had some gas and that it was a great day for more flying so we were off again.

This shot was taken en route to Udall and is a double bonus: an airfield AND a train. Pilot Pointe is the airfield and it is only a few miles SSW of Alley Field. It is a residential airport development similar to our destination Cherokee Strip.

We had dropped into Cherokee Strip about 1 in the afternoon. It was getting pretty hot on the ground even though it was a pleasant 67º at 800 to 1,100 ft AGL. Nobody was around so we started to saddle up when…

Since most of my pictures of trains are from above, this shot seemed like a necessity for balance if nothing else.

We started our motors and headed back to Selby surfing a 10 to 25 mph tailwind. It was a great ride with some excellent scenery contained pictorially in the following photographic images.

Cumulus Clouds over the Prairie

More Cumulus above with a lazy "S" river below

The "Homestead of the Day" Award

This house I have seen before and it gets the “Unique Homestead Award” for the day if not the year. It is a completely earth-sheltered home (except for the entry wall facing west not visible here). It is surrounded by a perfectly square yard embedded in another perfectly square crop zone. I have never seen anything else like it.

One more scene of God's Precious Creation Gift to us

The flight ended with my favorite sky: sparse cumulus clouds against a blue background. Another relaxing day in the skies above Kansas ends with a moving portrait of transfixing beauty.

One Response to “Fun Flight to Beaumont, Douglas & Udall • 18Sept10”