I am working on Part 3 of my series on Antique and Vintage Airplanes called “That They Might Fly Again“. I like to add segments to these movies featuring what I call “The Romance of Aviation”. To do this I visit a lot of different flying venues to capture the action. My first trip of the Fly-in/Airshow season was to Fort Worth, Texas. Greatest Generation Aircraft was having their “Spring Fling”. I decided this called for a maximum effort. I didn’t want to spend two days and stay in a motel room so I left Wichita at 2 am in order to be at the show for the 7:30am door opening. Dana Wood, the lady in charge of the event was kind enough to provide me a special parking place but I would have to get there at opening time. The parking place was good. After shooting all day I got back in my Mini Cooper and drove back to Wichita arriving home about 10pm.

The following are some still frames grabbed from some of the video I took that day. 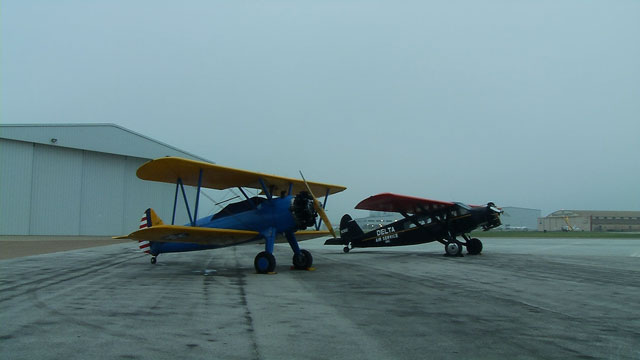 A Stearman and a Travel Air

It was quite warm that day and upon arrival the field was socked in. It made for some interesting pictures but unfortunately prevented a good number of pilots from arriving that morning. 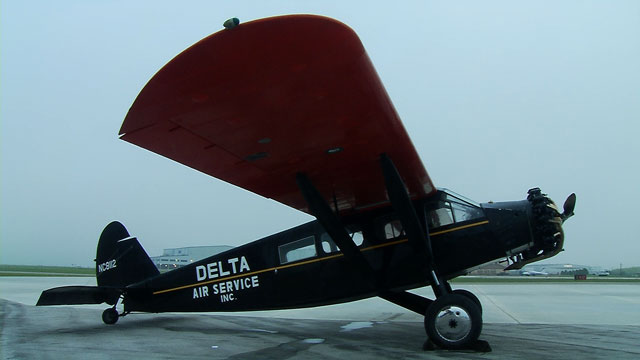 This Travel Air is a wonder to behold. It is owned by Scott Glover of Mt. Pleasant, Texas. He gave a few rides that day. The motor sounds great! 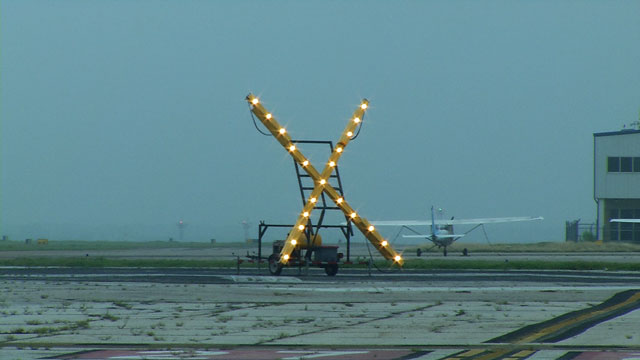 For quite a while that morning it stayed locked in. There was no wind and the temperatures and humidity conspired to maintain fog. While I was waiting for things to happen I shot this “runway closed” marker they put on one of the runways close to the show.

They have some really nice WWII planes in their club. The C-47 gave rides continually once the fog let up. Here are some shots of it: 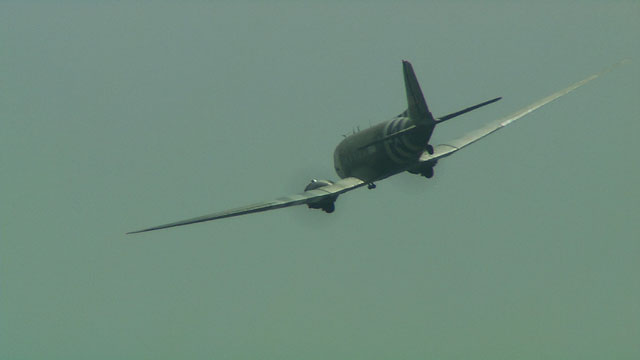 C-47 with the first glint of sun on its wings 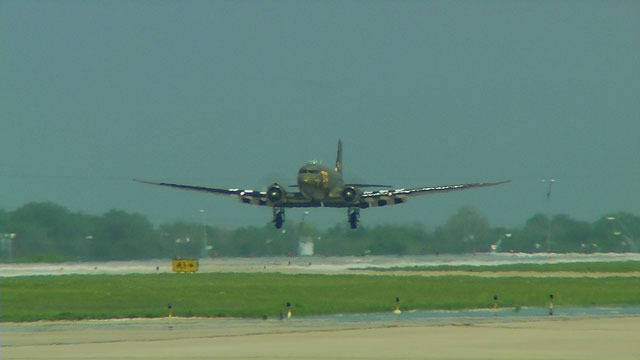 On the threshold. This was later in the day. You can see the heat waves. 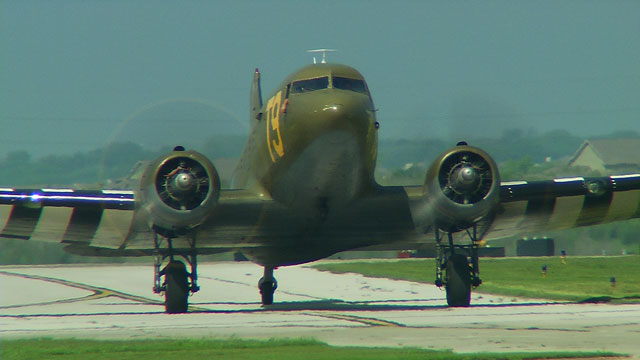 The C-47 has a very imposing look to it. 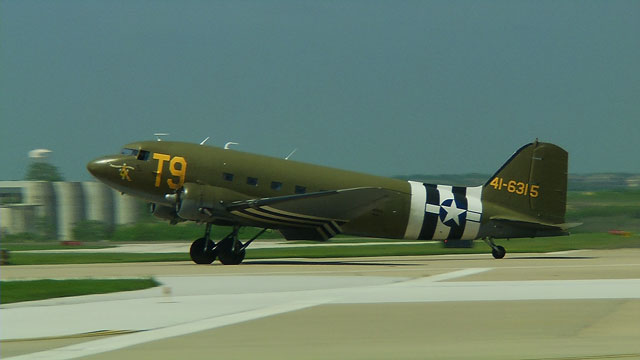 There was no place to park at the Club’s side of the field so they arranged for a satellite parking place. A really special innovation in keeping with the “antique” theme was the classic service trucks they used to transport folks back and forth. 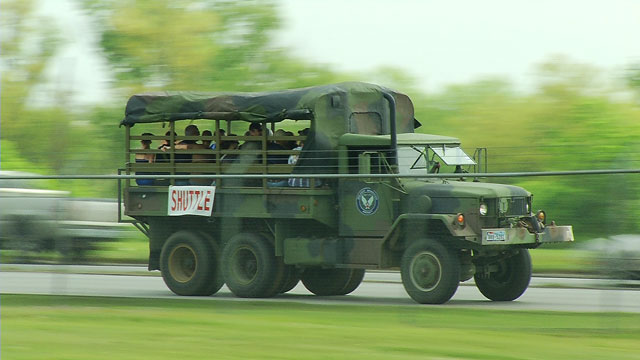 These trucks were manned by some dedicated volunteers and were constantly moving back and forth with folks. 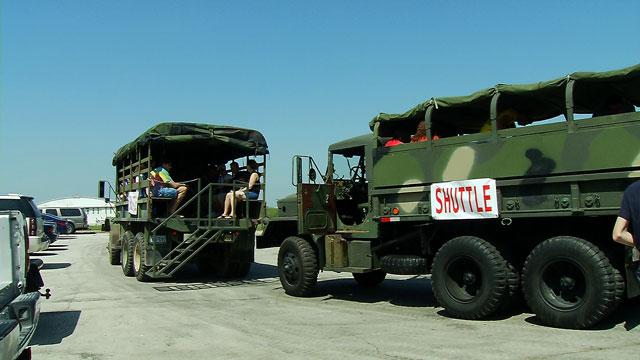 The Travel Air, the Stearman and a nice Great Lakes took a lot of people up for rides in the cool air. 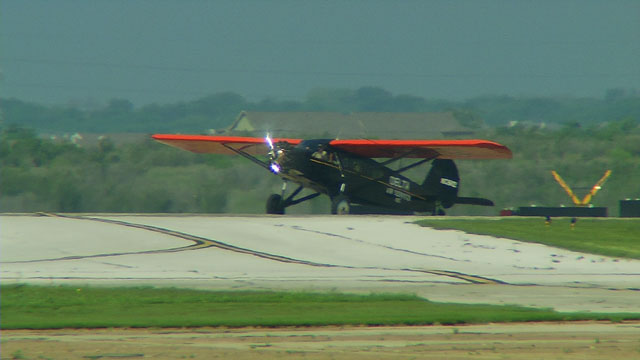 The Travel Air just after roll out turning off the active 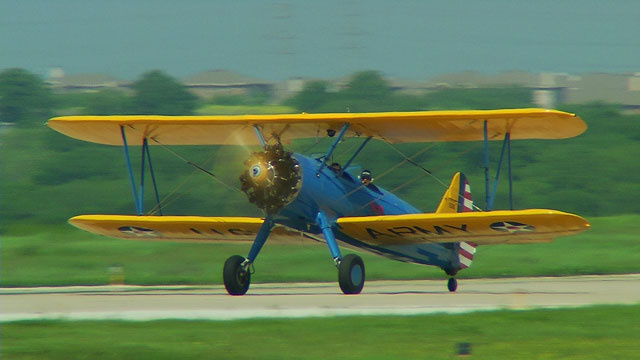 After landing, still on the active 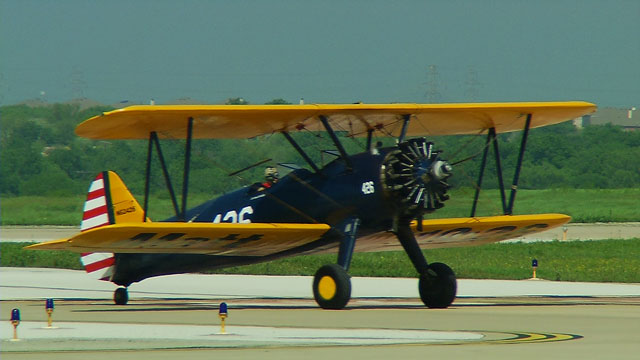 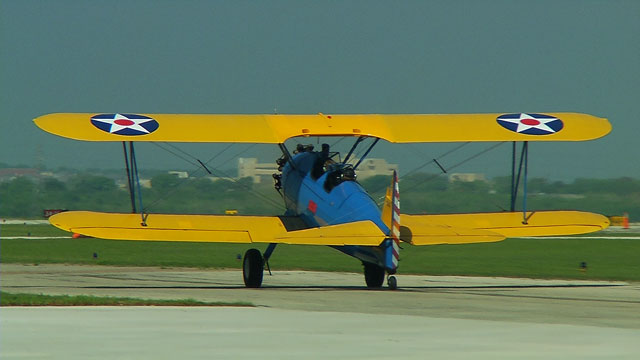 Taking out another passenger 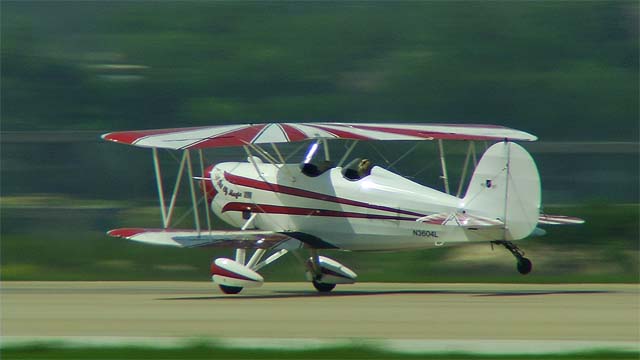 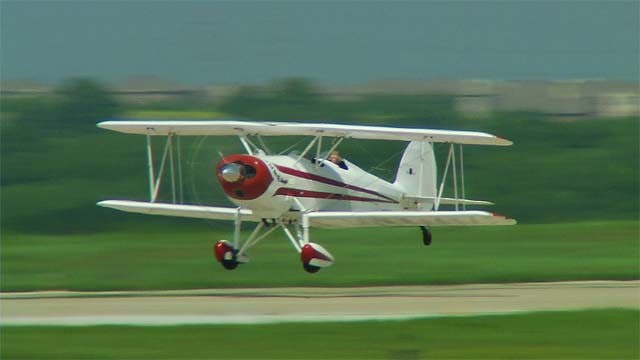 The Great Lakes about to touch down 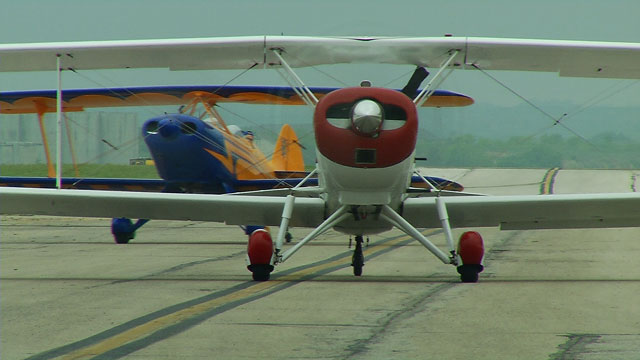 This still was early. You can see the fog in the background. They were parked around the bend and were taxiing over to the show.

The club or one of their members has a really nice P-51. It didn’t fly that day. 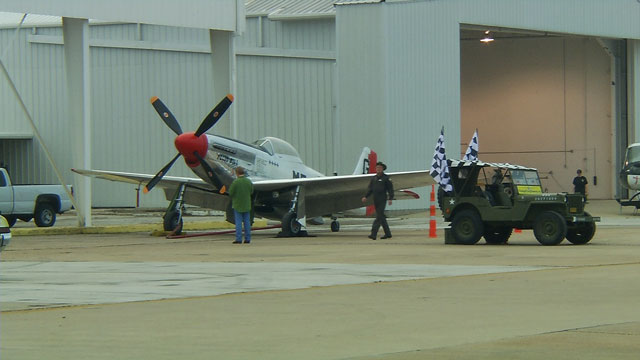 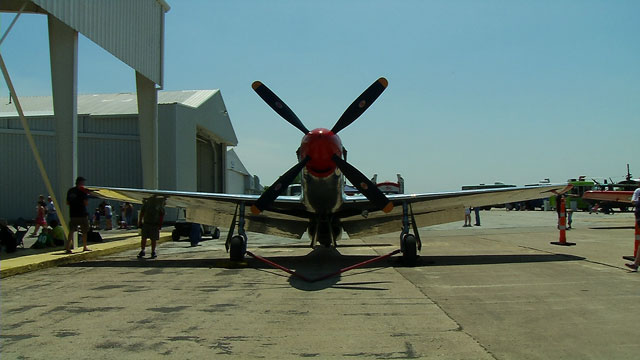 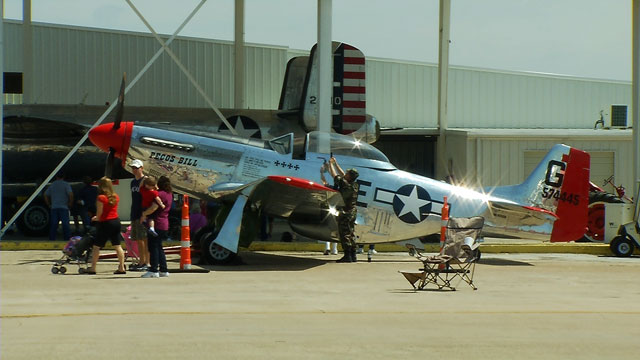 They also have a B-25 but it did not fly that day. They kept it under an awning which did not provide potential for good pictures. Maybe there was a possibility of hail. It looked to be kept in great shape but the cowl was off the left engine so probably it was in need of maintenance. I noticed this B-25 has a machine gun mounted in the nose. I had never seen that before and wonder if it was ever done in WWII or Korea. It also had guns mounted on the side of the fuselage which I know was done in wartime. 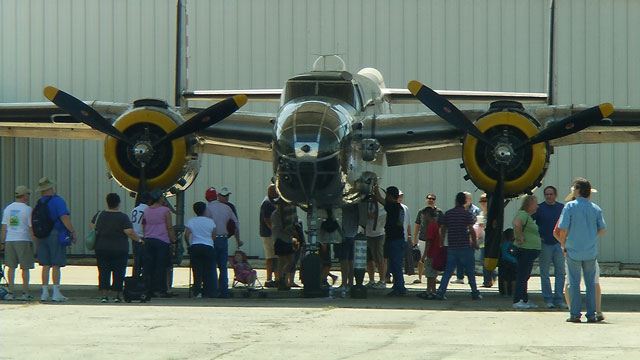 The B-25 drew a lot of attention all day. My Father had some time in the B-25 but mostly flew fighters. His comment on the B-25 was that it was incredibly loud in the cockpit.

Here is a great restoration of an SNJ trainer. One of my Dad’s jobs in the Air Force was training pilots in the Army Air Corps version of the SNJ called the T-6 Texan. 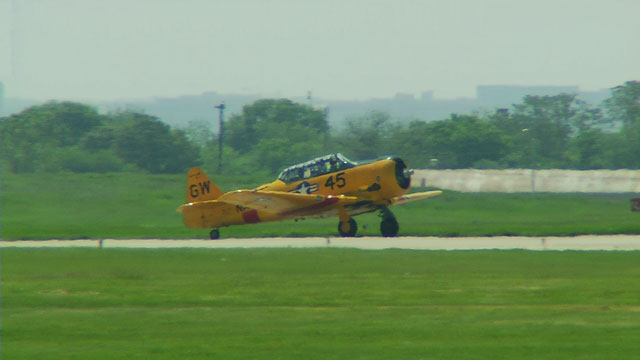 This was from quite a distance. You can see heat waves. 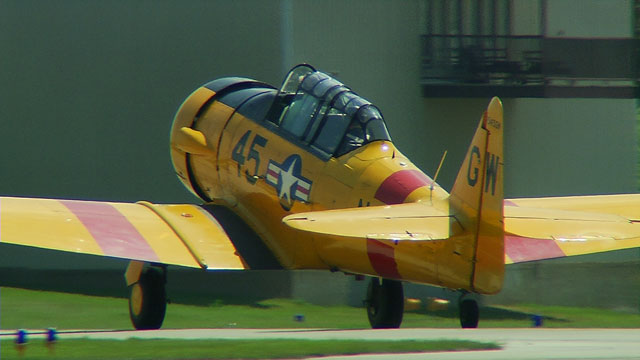 The shiny skin attests to the care paid to this plane

In addition to all the airplanes, classic and hot rod cars were invited to add to the show. 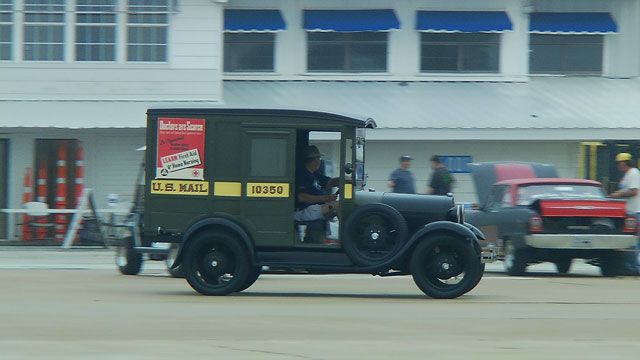 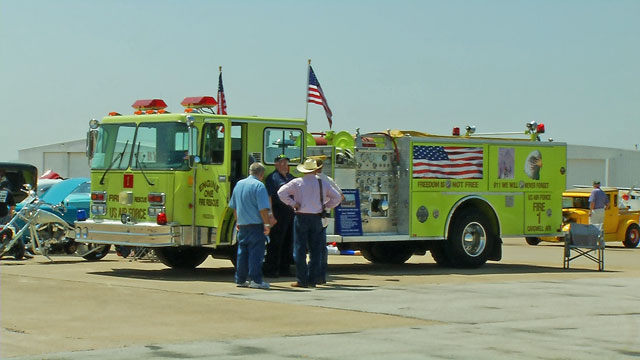 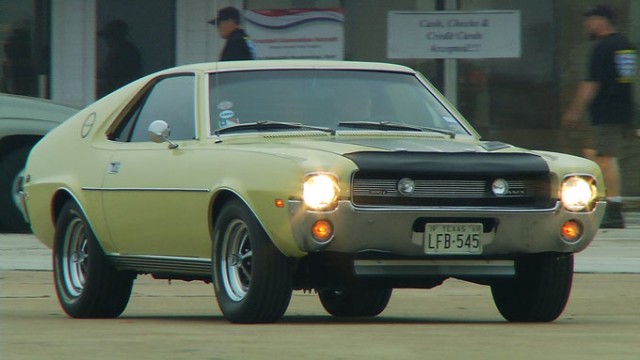 It was a great day regardless of the early fog and long round trip drive. I have a few more lined up. I will keep you up to date with them as I shoot ’em.