I checked my logbook and it indicated I had not been airborne for 21 days. Seeings how the forecast was heading in the “poor” direction I decided to make use of the 2 day window of clement weather we were having. Saturday might have been the better of the two days but I was bound and determined to get some video editing and web work done so I stayed in the office all day. When I arose for Church Sunday it looked like it would be the day although it was a bit windier than Saturday.

As I entered Church the temperature was above 60º and the wind was around 10 – 15 mph out of the South bringing that warm Texas air up here to melt the snow. Unfortunately when Church was over and I got outside again things had deteriorated. Gusts were suddenly hitting 37 mph! That’s a little too much for the MXL, so if figured I would wait it out for a while. I went down to the office and put in a couple of hours taking occasional micro-breaks to stick my head out the back door to check the weather conditions. My guess was that it would trend down around 3pm. About 2:30pm I decided I had enough of the indoors (I have been editing video and web sites for a week solid) so I packed up my gear and headed out to Selby Aerodrome. I figured I could get some air if the wind died down or at least get out of the office for an hour or so and see what was happening around the hangar.

As it turned out I was able to accomplish both things. Don Forse was there and was working out the stowage method for his new porto-bike. It is made by Dahon and is a really nice fold-up design perfect for fitting in an airplane. 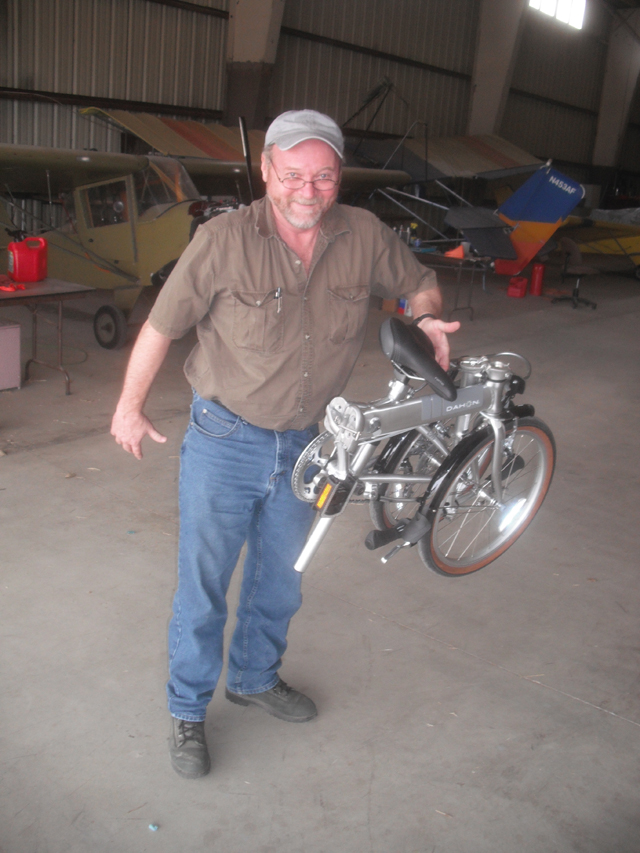 As you can see from the picture, the bike is finger-tip light. It is made from aluminum and has a lot of really nice features including a twist grip gear changer. I drove it around the hanger and was impressed. 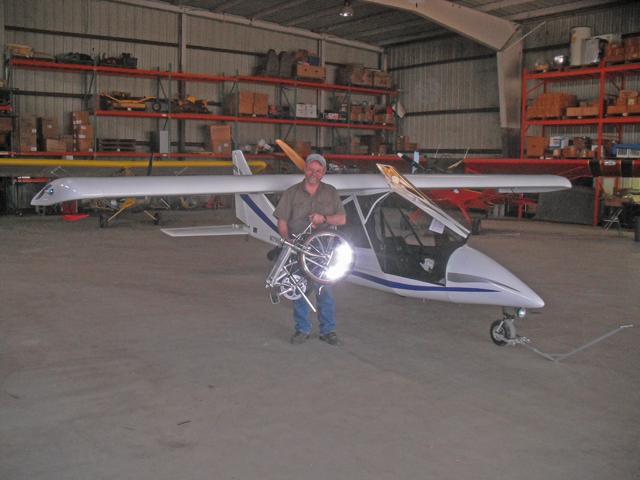 Don and Dahon in front of Ti-ton (Aviation Poetry)

Naturally I wanted to show Don with his Titan holding the bike so you could wrap your mind around the entire concept. Don insisted that I wait a few minutes while he put some extra shine on the bike for this picture.

During this “bike discovery phase” of my Aerodrome Sunday, Bill Bailey drove up in his truck and at the same time the wind died down (a bit). I hereby pronounce that he has Good Weather Ju-Ju. But, even though it relaxed a little, the base wind was just under 20 mph with the gusts around 30. This is perfect air condition for some Sky Surfing. It’s like the guys at Wimea Bay will surf the 6 foot waves if they have to, but they like it better when the 20 & 30 footers come in. I don’t like the 30 footers all the time but on occasion they are a fun challenge. I saddled up and took to the air. 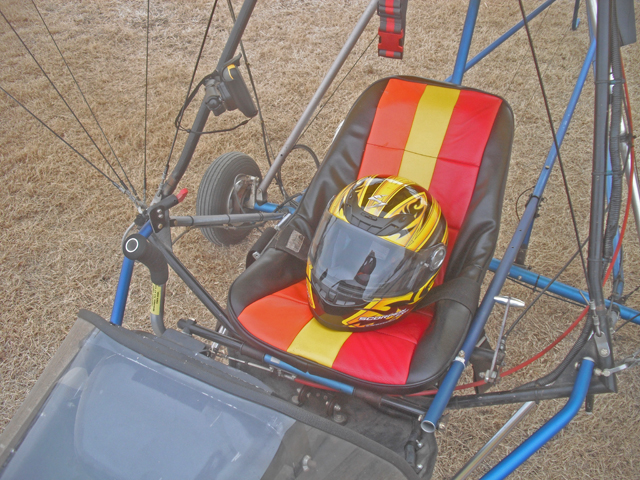 I don’t suppose I could talk you into considering the shot above as “art” so I’ll take the other route and just tell the truth. I finally broke down and bought a new visor for my helmet and this would be the first time putting it to use. Over the last few years it had become progressively more scratched so that it was really becoming unpleasant to wear. It was like having dirty glasses on all the time. I had tried a liquid polishing system that claims to dress out the scratches but $20+ later it looked the same to me. So, I finally bit the bullet and paid $35 for the new visor. It was worth every cent. Now it’s like there is nothing in front of my eyes at all. I’ll just have to be more careful now to keep it that way… 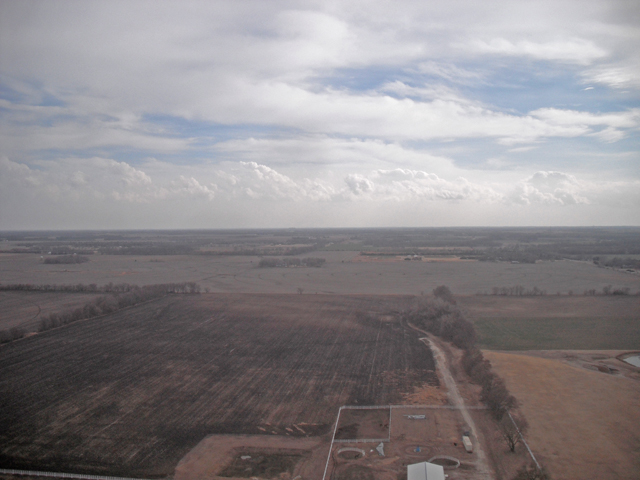 The view South from Selby Field at 300' AGL

On takeoff I had to hold a lot of right aileron to keep the wing down and as soon as I was airborne the MXL weathervaned about 30º into the wind. I made one circuit around the field and snapped the shot above to show the condition of the sky. As the afternoon progressed the clouds really built up – some into anvil tops. 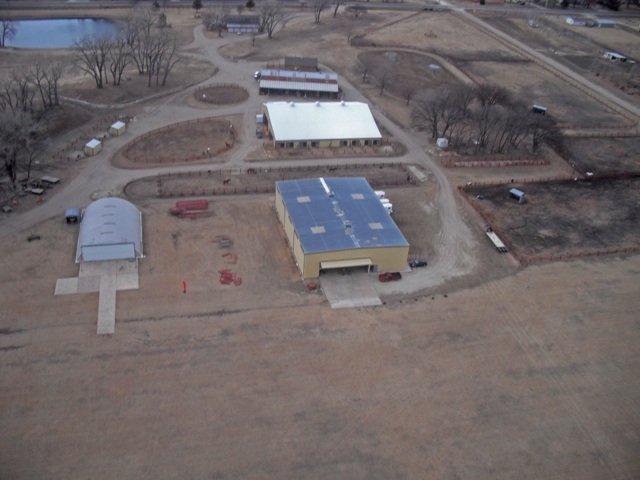 After making a few circuits around the field I was impressed with the way the engine was running and the plane seemed to be interacting with the air in a grand manner. I noticed Don and Bill had pulled up some chairs in the hangar door and were watching. You can barely see them in the shot above. Always thinking of a different shot, I decided to land and see if one of them would take some pix of me flying around. I landed and, with the engine still running, communicated my desire in hand language to the two armchair aviators. Forse took up the challenge and I proceeded to blast around the pattern trying (unsuccessfully) not to rile the horses on both sides of our field. 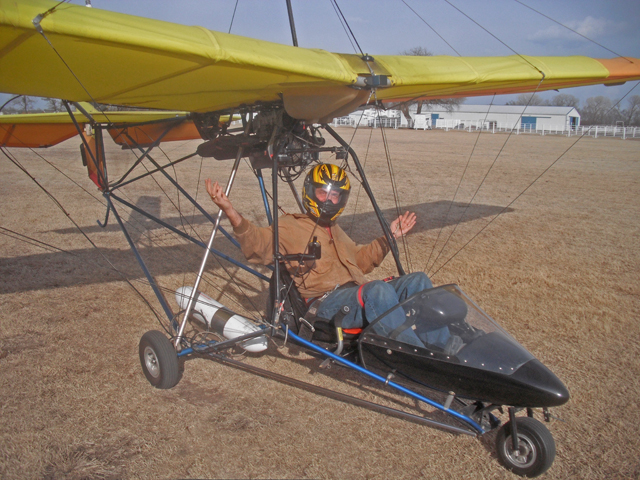 The picture above is a good example of a “art sense disconnect”. I had this mental picture of me doing the “It’s Showtime” stance while sitting in my semi-reclining seat. It turned out to be what you see above – sort of a cross between “the big one that got away” and “Who me?”. I’m not sure what to make of it but sometimes I’m a better Director than an Actor… 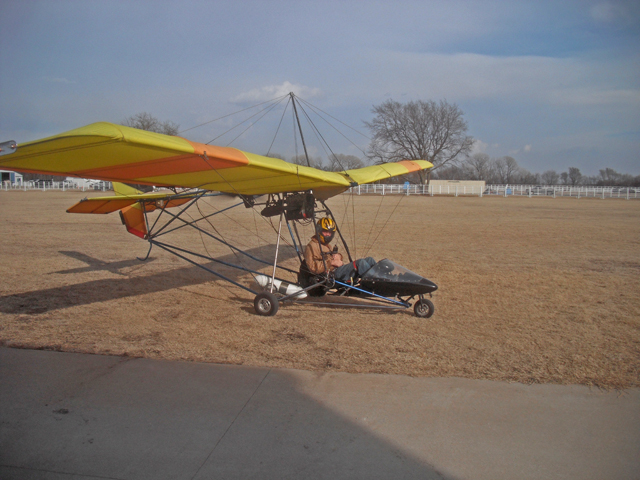 I saw Don back up for a wide shot so I performed my obligatory “Thumb’s Up” gesture only to bury the vertical digit behind my GPS. You’ll just have to imagine the swagger. Next I took to the air and Don did his best to capture the moment with my marginally functional pocket cam. He got some pretty good stuff. 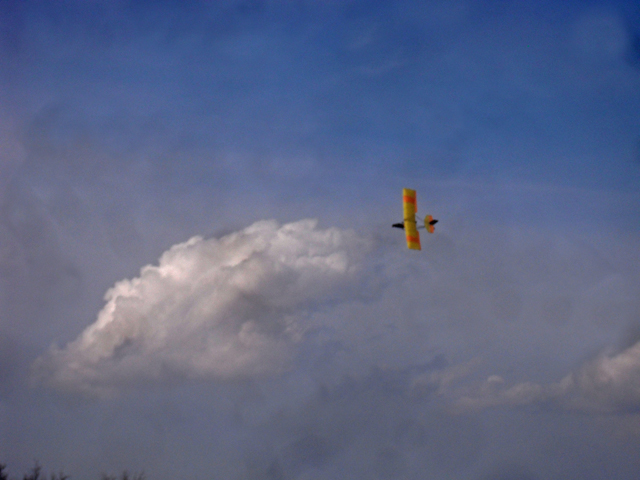 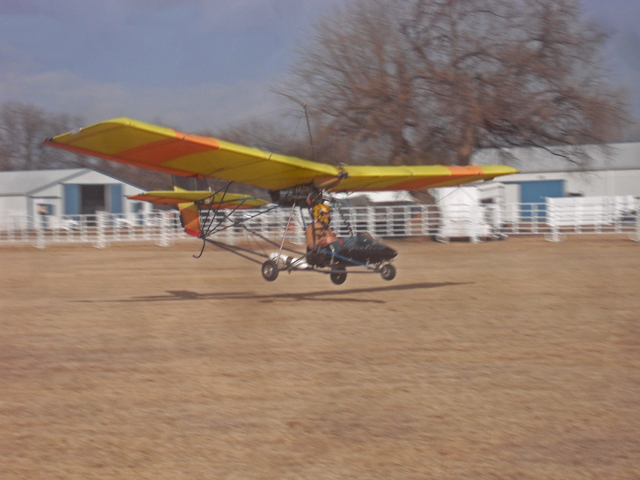 If you just look at the shot above it appears like any fly-by. Actually that’s pretty much what it was… Except the mechanical turbulence was popping over the top of the hangar behind the camera position. It was making every effort to punk me into the turf. Hence the “jittery-vibratory-looking” plane. 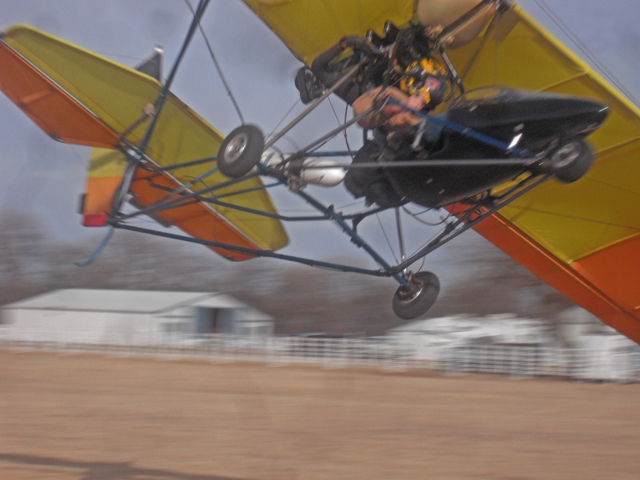 Let the wind do the work

Don walked out into the airfield and I made a few passes directly at him – directly into the wind. We’ve known each other long enough that he trusts my judgement implicitly – OR – he was concentrating so much on the crummy little camera viewfinder he had no idea how close I was getting… Anyway, he grabbed this dynamic shot. I thought this looked pretty cool as I popped the wind-side wing up just enough to let the gusting breeze crank it over and pull me skyward. 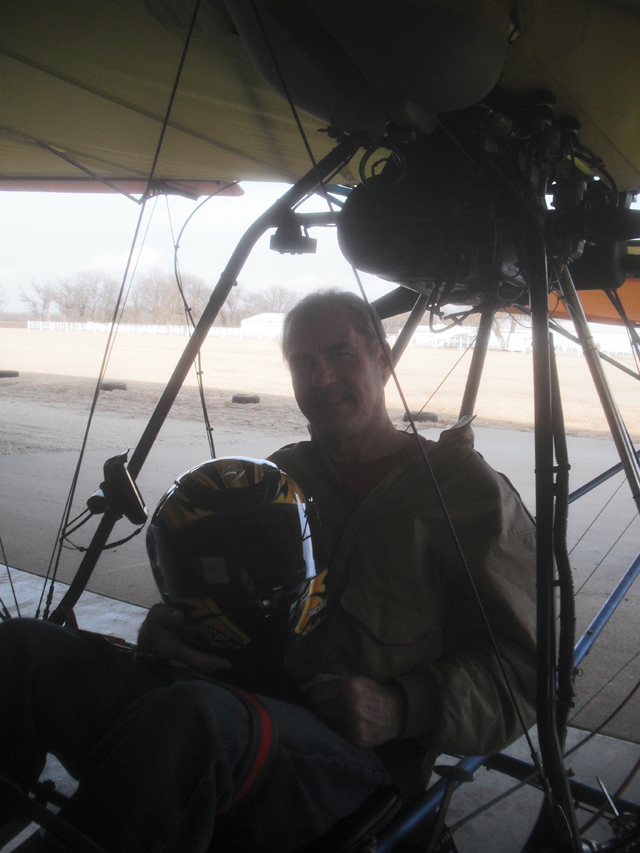 After I had about all the fun I could stand, I put Little “B” (my MXL) back on the grass and rolled right into our hangar. I entreated Don about 2 or 3 times to try this shot even though he said there was too much back light. He was right but I was so proud of my new face mask I wanted you to see it again. When I got home, my dog Haley was indeed impressed with the look of my new windshield that she immediately went out and got her a new pair of aviator eyeshades so as to be just like me. 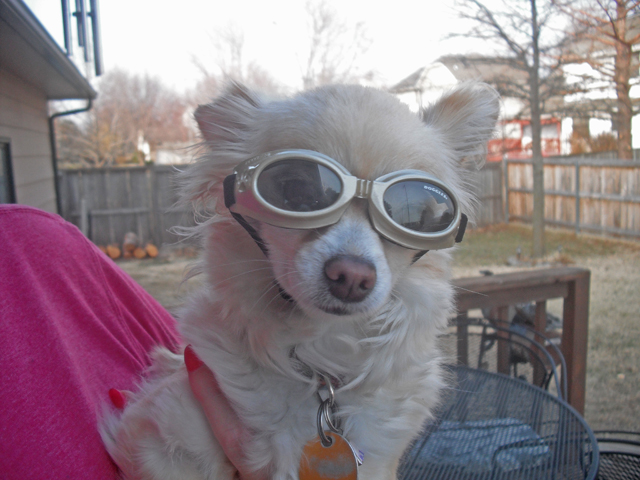 You know how dogs are.