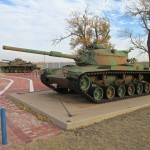 Infinite Sadness grips The Sky Surfer at the prospect of being grounded for an indefinite period of time. Below the MXL sits forlornly in the Eagle’s Den, waiting patiently to again dance the skies. The only question the Quicksilver asks is when? More on that later… 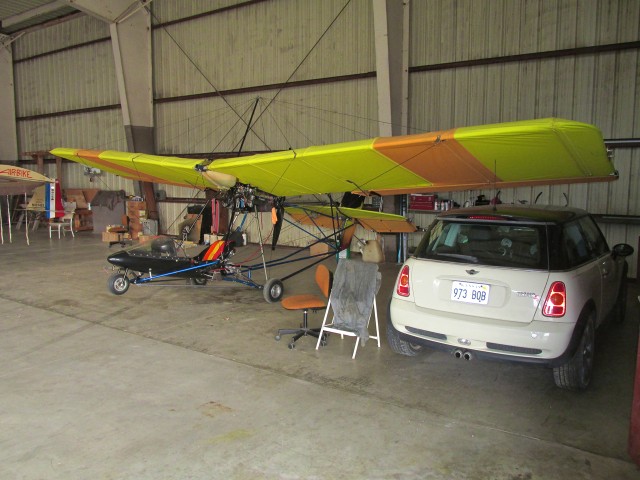 In my previous post about the Fairview, Oklahoma All Veterans Air Show I forgot to show you something I happened upon on the way home. Going to the airshow I took the main arteries because I have a self-recognized tendency when trying shortcuts to turn them in to LONG cuts. On the way home, though, I thought I would attempt a more direct path back to Wichita rather than driving on the outside of the box like I did to get to Fairview. I wanted to see if I would make better time and also see another part of Oklahoma. First, there were two things I saw I should have taken pictures of but I didn’t. One was an excellent plateau in the distance that was very picturesque and totally unexpected out in the flatlands. It was about 10 miles North of Fairview and West of Northerly travel. It was far enough from me that I knew it would not show up well without a much longer lens than my pocket cam has. After that, a little farther North I saw the Salt Flats. I didn’t take a picture of that because I had already flown there last Summer and documented the trip which I called “Salt Flat Safari”. I have plenty of shots of it HERE.

Regardless of missing those two photo opportunities, I did find a treasure to report out on the plains. Since I had just come from a Veteran’s Appreciation event I was pleased to see more evidence that day how much the people of Oklahoma honor our veterans. Without warning as I was cruising upon one of the blacktop two-lanes, I saw the scene below. It was outside a really small town with nothing else around. It surprised me so much that even with the sun waining in the west, I had to stop, get out and look. I ran around taking these pictures but was in too much a hurry to drive up the road to get the name of the little town about a half mile from this memorial. I looked all over the map but so far have not located it. 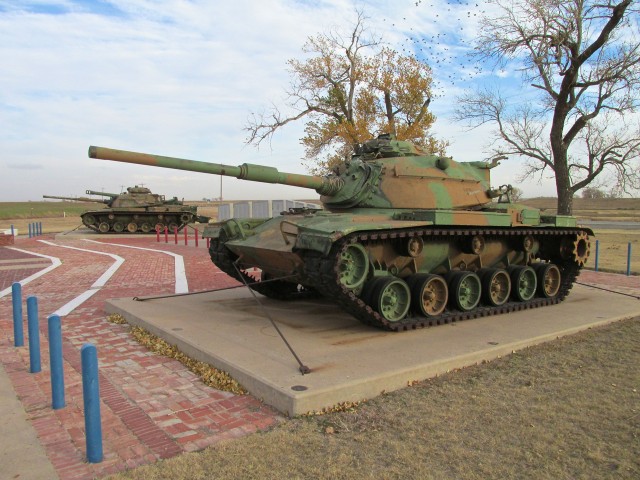 These two main battle tanks are positioned closest to the road I was traveling on.

Above you can see what caught my eye. There are two main battle tanks and a howitzer. The other shots will give you more detail of the entire memorial. (By the way, if you thought I overstated the windiness of this area in the Fairview Airshow report, examine the photo above and you will see that the Native Oklahomans concur with my wind evaluation. Please note that as a precautionary measure they tie these tanks down with steel cables so the wind won’t blow them up to Kansas.) 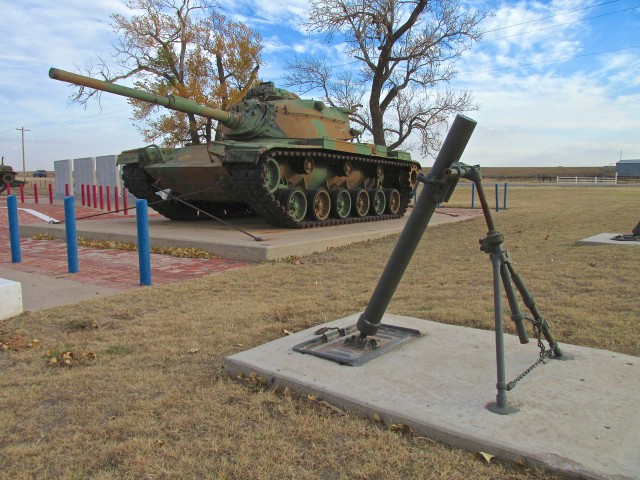 Evenly arrayed around the memorial were these mortars forming an iron perimeter. 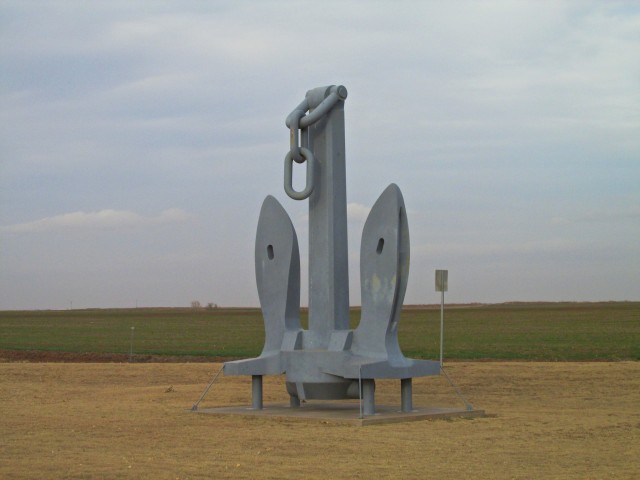 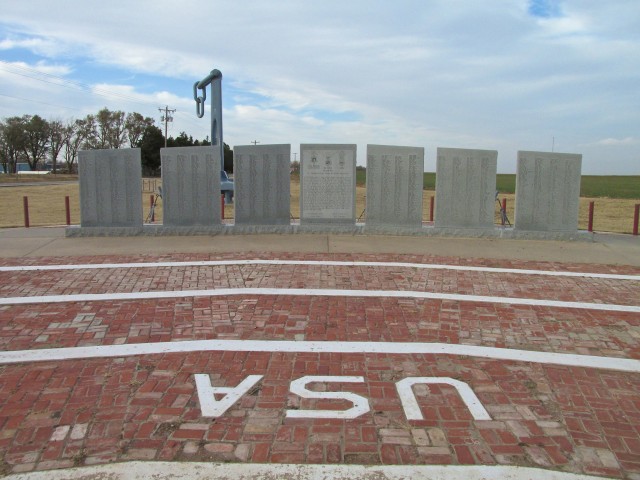 The centerpiece of the display is the Wall of Honor. 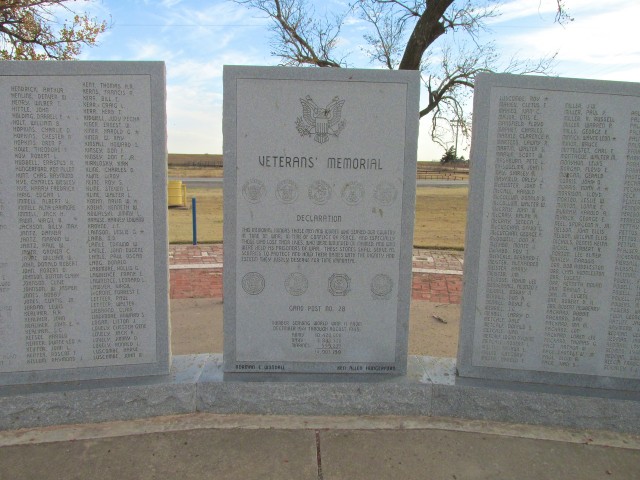 The Center Column of the Wall of Honor

If anyone knows what town in Oklahoma this memorial is adjacent, please let me know. It is not too far East of the Salt Flats.

The Rest Of The Story

OK. I told you I was grounded. Now here’s why. Preventive Maintenance! My trusty Rotax 503 has been running as smooth as can be for the last 4 years but now has 336 hours on it. Rotax says you need to overhaul them at 300 hours. You can find people who have run motors 1,000 hours without overhaul (at least that’s what they claim) but I don’t see any “up side” to flying the motor until it quits. That’s OK for snowmobiles and SkiDoos but not for aeroplanes.

Over the years I have attempted a variety of mechanical repairs and tune-ups with mixed results – mostly bad. Even though 2 Stroke Motors are simple in terms of parts count and design, they require sophisticated methods to make them “right”. Some of these methods are learned over time and some require specialized tools I don’t have. Years ago I decided it is far better in terms of money and time to have professionals work on my cars, cameras and Ultralight. There are certain mechanical things I will do, but major engine work is best not done by my hands (I did remove the Rotax from the MXL and box it up for shipment, though). Regarding this attitude I call upon the words of the immortal character creation of Clint Eastwood, “A Man Has Got To Know His Limitations”.

Actually in a moment of inordinate self esteem, I did research doing the overhaul myself. But after reading Airwolf’s two or three page explanation of what they call “de-carboning” the motor, I came to my senses. It’s not that Mike Stratman doesn’t do an excellent job explaining every aspect of Rotax repair and tuneup – It’s Because HE DOES. Reading his description of the job snapped me back into reality.  You see I might overhaul an engine 4 times in my life. I need a guy or an operation that has overhauled hundreds or thousands of engines. I want a better job than I can do.

After looking around the web I found Rotax Rick of Florida. We exchanged some email and I thought he sounded pretty knowledgable. He is an A&P and has raced with 2 stroke motors and also flies a Quicksilver. That all sounded pretty good but I still wanted to talk to him on the phone about a few details before I considered sending my motor to him. Last week I got him on the phone and we discussed engines, carburation, fuels, power settings, mixtures, etc. for almost an hour. That convinced me. In fact, after getting off the phone I wished I had recorded the entire call. It was like listening to a professorial lecture at the M.I.T of Rotax Maintenance. Once Rick has gone over it, I am really looking forward to putting my engine back on the plane for the 2013 Flying Season. I think it will run better than ever.

I just sent the motor to Florida yesterday so I’ll probably have it back in 2 or 3 weeks. I am also changing the drive shaft bearings while this is being done so I will have a totally rejuvenated power train.

I took some pictures while removing the engine (with the help of my buddy Joe Bryant) and have asked Rotax Rick if he wants to take some pictures while his shop does the overhaul, too. When it is all done I will put the “Overhaul Story” here on Sky Surfing.